June 27 – September 19, 2018: Nukaat here again. Once again I endured the rolling endless seas and being away from land for a long time. Then one day we arrived in this new place called Kota Kinabalu. It’s in Malaysia. That’s the third country in my cat passport.

It was nice to be able to see land and occasionally walk the docks again. I haven’t seen any other cats about and there is just one small dog creature here named Chloe on one of the nearby boats. She hasn’t bothered me yet, but I bet I could take her. There’s also a really big monitor lizard. I stay away from her. Or maybe it’s a him. Hard to tell. And lots of birds to watch.

I was just getting used to staying put in this new place when there was more upheaval. Have I ever mentioned how much I hate it when things change? 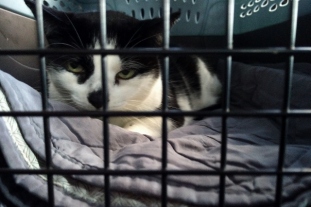 Oh the indignity. I was unceremoniously plopped into the evil box and driven halfway across town to Pet Paradise, a sprawling complex that includes a pet store, dog grooming station populated by yappy little dog creatures, dog kennel, cat café where my distant cousins are forced to preen and endure the touch of humans and their squealing offspring, and cat hotel off to one side.

My destination was the cat hotel. One of my primary assistants waited around while a bunch of new assistants helped me out of my box and oohed and aahed over me. Then I was gently placed into my new home. Apparently it’s called a cat condo. It was all a bit overwhelming as I could smell and hear other cats close by but I couldn’t see them. I stared at my assistant with my best sad face through my big picture window. Instead of rescuing me from my situation, she took my picture instead. What was going on?

Soon my assistant left and I was on my own. Condo living isn’t as spacious as my boat home. Oh the shame of having my potty, food and sleeping mat all within reach. I know my assistant had tried looking for other options before bringing me here. She really wanted me to stay in someone’s home, but now that we’re not in Subic anymore, she didn’t know anyone that was willing to take me for nearly three months. That’s a pretty big commitment, even for someone as loveable as me.

This wasn’t anything like my other home with Richard and Mylene, Matthew, Charlene and Ninapot. There I had the run of the house and was totally spoiled. And I was an only cat.

Here, by contrast, lived all the cats that were off-duty from their jobs in the cat café as well as a bunch of other transients, like me. But none of the other visitors were staying as long as me. This gave me a few privileges not normally enjoyed by the others.

I got the run of the place. They let me out to explore most of the time during the day. Mostly I spent my time out of solitary as far away from the other cats as possible and chose to hang out with my assistants instead. Occasionally I’d be introduced to another cat but I stayed away from the monstrous guy they called Maine Coon. He was a big bruiser. Once they even brought in a prickly creature called a hedgehog. His name was Peanut. I left him alone even though he was a lot smaller than me. His fur was pokey. 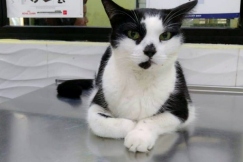 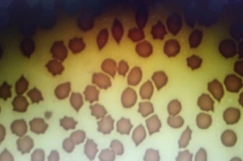 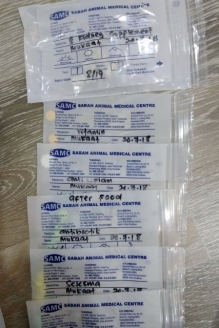 Being in confined quarters with so many flat faced felines and rescued kittens was bound to result in some kind of health issue. I went on a hunger strike. I think I had my assistants worried so one of them took me to see a vet. I had some ear mites, a blood parasite and the flu. They fixed me up pretty quickly but I had to take a bunch of pills and get a bunch of ear drops. That’s no fun. But at least I got my appetite back. 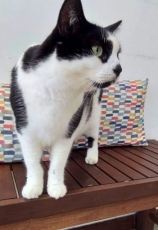 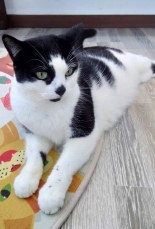 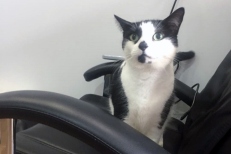 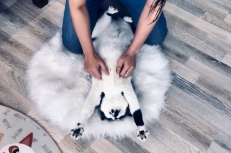 I missed my night time forays on the deck of the boat. There was no outside here. I missed my big scratching post. I may have even missed my regular assistants, although these news ones were nice to me too. Between feedings, I spent my days watching and sleeping. I guess that’s not really all that different from my nautical life.

One day, my assistants brought out my box again. Oh oh, not another trip to the vet, I thought. But this time they also packed up all my toys and food and potty too. What was going on? I heard my regular assistant’s voice before I spotted her. I’d almost forgotten what she looked like so I pretended not to know her.

Pretty soon we were back in a car on our way home. I barely had time to thank the nice ladies at the cat hotel for looking after me.

I had a hard time containing myself when we headed down the docks at the marina. It felt great to be outside and back in familiar territory again. I tried hard to ignore my assistants for abandoning me for so long, but life’s too short to hold a grudge for long. Besides, they gave me lots of guilt treats for the next several days. The cat hotel was okay for a visit, but there’s no place like home.

Oh oh. I think some ear mites hitched a ride back here with me. That’s itches. 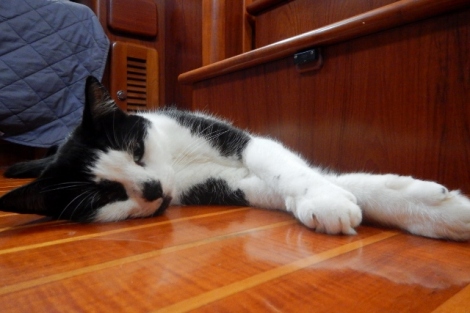