June 27-September 17, 2018: This is a hard post to write. Our usual trip home for the summer is meant to be a fun-filled, sun-filled time spent with family and friends without a care in the world. The reality was quite different this year.

It all started with a mix-up upon our arrival at the airport in Vancouver. My dad had offered to pick us up, as he usually did on each trip home. Our plane landed a little late. When we made our way into the arrivals area, my dad was nowhere to be found. It was very unusual for him to be late. Oh how I wished he had a cell phone. We hung around for about two hours periodically calling his home, before finally renting one of the last cars before the upcoming Canada Day long weekend. We drove out to his place, where we found him tucked in bed. He had left the airport about five minutes before we emerged. 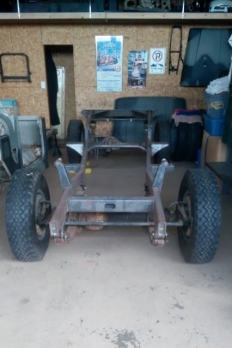 We spent a couple of days visiting with dad before heading to the island. He seemed really tired from the long drive out to the airport and back. We took him shopping for a mobility scooter. When he took it for a test drive, racing up and down the parking lot, he broke into a big smile. We made an appointment for him to get a note from his doctor.

We left dad and took the ferry to Sidney, settling in to our usual routine in our condo. Up early, head to Alexander’s for a coffee (or, in my case, tea), go for a walk along the docks at the Port Sidney Marina. Chris pops to the hangar to putter around on his bike or work on the restoration of his Land Cruiser pickup, while I putz around the condo and pick up some groceries for lunch and dinner. Catch up with friends. Go up to Nanaimo to visit Chris’ family.

One morning at the coffee shop, our friend and owner Sandy was telling us about her staff shortage. I offered to lend a hand for the summer while we were home. Just like that I was working three early morning shifts a week. Meanwhile, Chris and his sister Joy were busy making plans for their annual off-road motorcycle trip. This year it would be through Washington state.

Back on the mainland, the doctor had given my dad some bad news. He shouldn’t be driving his car anymore. We put in an order for the scooter and picked out a four-wheeled walker to use in the meantime.

Not long after the doctor’s news, my dad ended up in the hospital. I now split my time between the hospital in Surrey and working in Sidney, spending half of each week in each place. The doctors kept him in while waiting for a pleural biopsy, which kept being postponed for one reason or another. 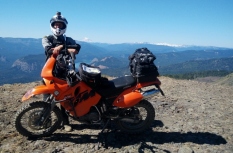 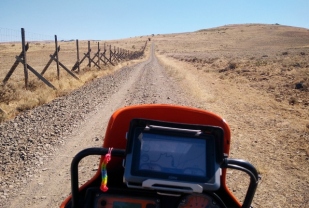 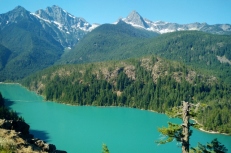 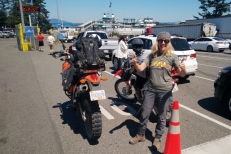 About this time, Chris and Joy headed off on their on/off road ride. They took the MV Coho ferry from Victoria to Port Townsend then drove down to the Washington-Oregon border via Mount St. Helens National Volcanic Monument. They crossed the bridge over the Columbia River to start the Washington Backcountry Discovery Route.

Over the next four days Chris and Joy crisscrossed the backroads of the Cascade mountains as they made their way north towards the Canadian border. Each evening they rested their tired muscles in tiny towns off the beaten track and recounted their day’s ride over frosty beers. They caught the Anacortez ferry back to Sidney.

My motorcycle rides in the meanwhile consisted of commuting between Sidney and Surrey. My dad was still in the hospital. He didn’t have much of an appetite. I kept bringing some of his favourite foods to tempt him, with limited success. Even blackberries and ice cream had no appeal. About this time I put together a Spotify playlist of some of my dad’s favourite gospel tunes. He was happy to sit in his recliner or lounge in his hospital bed and listen. Occasionally he even sang along. The word was out and dad had lots of visitors during this time, which eased some of my guilt when I returned to the island for a few days each week. 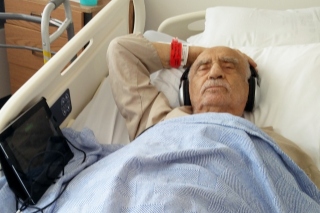 Finally my dad’s biopsy was rescheduled and completed. Now it was a waiting game for the results. On August 8, we got the official diagnosis. It was mesothelioma, a type of lung cancer caused by exposure to asbestos. We were not surprised, if anything more amazed by how long it had taken for the cancer to metastasize. Dad had first been diagnosed with asbestosis back in the late 1980s.

Just two days later, I got a call saying my dad would be released from the hospital that afternoon and returned home to his apartment where he lived alone. Naturally, this put me in a panic and I immediately rushed to the mainland. I didn’t think he was in any condition to be staying home alone without full-time nursing care. I put what supports I could put in place on a Friday afternoon as I crossed on the ferry. My worries were not unfounded. Patient transport had returned him home, sat him in his recliner and left him with his TV remote and phone at his side. He couldn’t get out of the chair without help. I had to call a care aide each time. This situation didn’t last long. In the middle of the night, we called the ambulance and dad was returned to the hospital.

In ER, I overheard the nurse refer to my dad as a “failed discharge”. I was livid and wrote a lengthy complaint letter to the health region. (I am still waiting for a reply regarding their investigation into the handling of my dad’s care.)

Dad was quickly transferred to palliative care and had lots of visitors during his last week of life. He passed quietly on August 20 with me at his bedside. 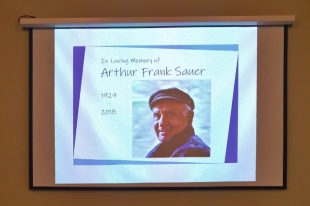 Over the next ten days, Chris helped me make arrangements for a memorial service, deal with all my dad’s stuff and move some of it to storage in Sidney. Dad knew everybody, so I wasn’t too surprised that his memorial was well attended by about 200 of his family, friends, neighbours and church family. Dad’s niece, Shirley and her husband Don, even made the trip out from Saskatchewan.

Back on the island, I took a day or two to relax before throwing myself straight into estate work. There was a lot to do before we were scheduled to fly back to Kota Kinabalu, and I wanted to get as much of it done as possible while I was in the country. I figured I could always sleep once I was back on MOKEN. It didn’t all get done. The rest will have to wait until next summer. 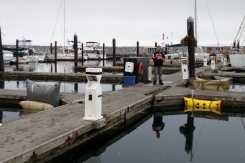 Somewhere in here, we joined in a family gathering to celebrate Chris’ dad’s 85th birthday and to send our niece Nadya off to Halifax to go to university. We did manage to spend a few evenings hanging out with friends around Sidney, and we even got in one long, cold, wet motorcycle ride on the Port Renfrew Loop before putting our bikes away until next summer.

By the middle of September, the weather was cooling down. Suddenly it was time to pack and make our way to the ferry. It was strange asking Rob and Shelley to pick us up on the other side. They put us up, toured us around Port Moody and drove us to the airport the next day.

I’d really like to thank our many friends and family for all their support during this difficult time. Extra special thanks to Jenny, Daisy and Elizabeth for hanging out with my dad when I was working in Sidney, to Trish and Barb for listening and making sure I didn’t lose it, to Sandy for understanding when I had to bail on her at the coffee shop, to Tracy and Johnna for reading my dad’s eulogy, to Tony and Gill who fed us countless times, to Mitch for driving us to the ferry and to Rob and Shelley for chauffeuring us on the mainland. Apologies to those I’ve missed.

Why is it that we always seem to forget to take photos when we are catching up with family and friends back home in Canada? Based on what photos appear here, it looks like we didn’t see much of Chris’ family or many of our friends in Sidney and the Lower Mainland, when in reality, we did. Must remember to make more of an effort to take photos next summer. If you have some photos from our visit home this year to share, please let us know.