October 16-17, 2017: In our last episode, we left off just as we were boarding our flight in Vancouver to head back to MOKEN. That sounds pretty straightforward, doesn’t it? Our only worry was whether we would have enough time to get from our arrival gate in Hong Kong, though airport security and to our departure gate in another terminal as our connecting flight to the Philippines was a little tight.

As it turned out, time was not an issue. We even had enough to spare to traipse around the airport looking for an early morning coffee and relax at the departure gate before our boarding call.

As boarding was announced, we zipped to the front of the queue, handed over our passports and boarding cards at the gate and prepared to sail on through to our Dragon Air plane. Not so fast. It couldn’t go that smoothly.

We were asked to step aside. There was a red flag beside our names in the computer. The counter agent advised us that there was an issue with our checked luggage and asked us to wait for airport security to arrive. What could it be?

When the security officer arrived, he showed us an x-ray image of one of our checked bags. Inside, we could clearly see our monstrous (and monstrously heavy) combination wrench for the equally monstrous nut that goes on the end of MOKEN’s propeller shaft. That wasn’t the problem. As it turned out, there was an issue with our old spear gun that we had decided to bring with us. Apparently, spear guns are a security restricted item in Hong Kong, whether you are a passenger arriving in Hong Kong or merely transiting through.

Who knew? Certainly not us. I’d even checked the CATSA website to double check that it wasn’t a banned or controlled item. We were perplexed.

The security officer asked us to wait for the arrival of the Hong Kong Airport Police. As we waited, we watched the remaining passengers from our flight head through the gate to the plane and heard the final boarding call. The doors closed, and we missed our flight.

It was another hour before the police arrived and escorted Chris with them to a van outside where all five of our checked bags that had been removed from the plane were waiting. Surrounded by eight officers and all captured on security video, Chris was asked to open the offending bag and pull out the spear gun. After he was advised that spear guns are restricted, he was given two options. Have it placed in a customs bond until our onward flight and go through the presumably lengthy process to obtain an import permit or hand it over. Chris handed it over. The spear gun was old and not worth the hassle.

Of course, I didn’t know any of this until much later. Meanwhile, I was sitting back at the boarding gate with our large assembly of carry on luggage. Waiting. Notifying our driver in the Philippines and Nukaat’s foster family that we had missed our flight. Wondering what was taking so long. Googling. Worrying.

Try as I might to find any information about the restrictions on spear guns online, I kept coming up blank. Except for this… 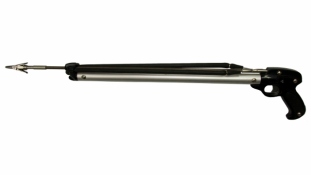 Eventually, after what seemed ages, a Cathay Pacific agent collected me and took me upstairs where I was reunited with Chris and they kindly rebooked us on a flight the following morning, for a hefty rebooking fee. At least they whisked away our checked bags so we didn’t have to cart them around.

We made our way to the airport hotel, checked in and snoozed away much of the grey, drizzly day. Later that afternoon, we decided to make the most of our unexpected Hong Kong layover and escaped from the airport. We took the airport train and rode the metro to the Wan Chai district where we enjoyed a cold beer and a huge local spread of roast duck, crispy noodles, squid and vegetables at the especially popular and crowded Hay Hay Kitchen.

We made it to Clark and on to MOKEN a day late and one spear gun lighter, but at least not suffering from jet lag. 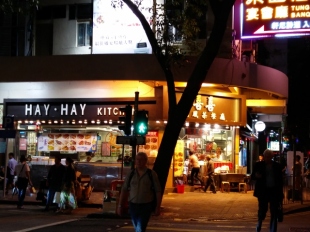 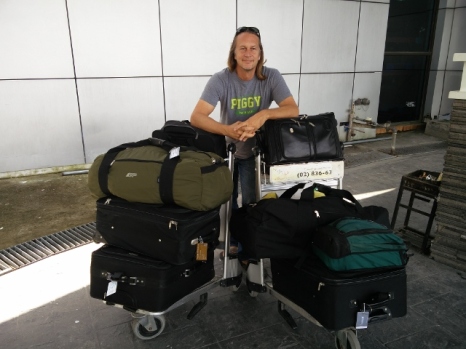 At the time I was googling for information about spear gun restrictions in Hong Kong, I was unable to find any of these sources. But even today, I still find it all a little unclear. What do you think?

CATSA is my usual go to for finding out what can and cannot go in our luggage. Their list doesn’t include spear guns. I know because I checked before we flew out from Vancouver.

Here’s the Packing Tips for Air Travellers checklist that is referenced in many places. No mention here either.

On the Hong Kong Police Force website, it says it is illegal for the residents of Hong Kong, visitors or transit passengers going through Hong Kong International Airport, to carry firearms and ammunitions within the territory of Hong Kong, irrespective of whether these items are stored in the hand-carried luggage or hold luggage. They don’t list spear guns in their list of prohibited weapons and I don’t think of a spear gun as falling under the classification of “firearm.”

The Hong Kong Customs and Excise Department website lists firearms and ammunitions as controlled items for import and their list actually includes spear guns. But we weren’t importing, we were just passing through.

If you don’t read the legislation that spells out the restrictions in detail, it’s all pretty unclear. I dare you to read Hong Kong’s complete Firearms and Ammuniation Ordinance. It’s riveting.

Buried on the Cathay Pacific website in reference to baggage restrictions, I finally found this:

The following items are not allowed in your cabin baggage but you may pack them in your check in baggage, provided you meet the requirements.

Guns, firearms and other devices that discharge projectiles

Please check with the Civil Aviation Service of Hong Kong and the Hong Kong Police department if you plan to put any of these items into your checked bags.

Devices capable (or appearing capable) of being used to cause serious injury by discharging a projectile, including:

Guess we should have asked when we checked in.