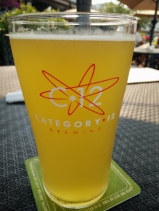 June 27 – October 15, 2017: Since we moved on to MOKEN in the fall of 2012, we’ve been back to Canada every summer with the exception of 2013. This year, we decided to extend our usual six-week visit and tacked on a couple of extra months so we could be home through Canadian Thanksgiving.

While this meant leaving MOKEN on the hard in the boatyard, and imposing greatly on Mylene and her family to look after Nukaat, we liked the idea of trading the worst of the rainy season in Subic Bay for endless summer and more time to spend with family and friends.

You would think Chris has enough work on his hands looking after MOKEN, but that didn’t stop him from getting a good start on his long-awaited Toyota Landcruiser restoration project. Disassembly started soon after we arrived and progressed quickly. 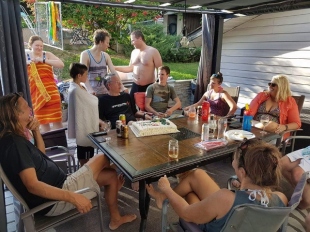 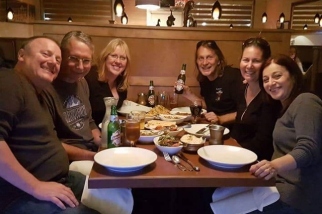 We made our first of two road trips to Kelowna, in part to order a new truck frame, but more importantly to visit our friends Mike and Sandy, and our (ex of Sidney) friends, Warren and Maia, who had just moved up from the island. We timed it well. It was Mike’s birthday weekend, complete with pool party. 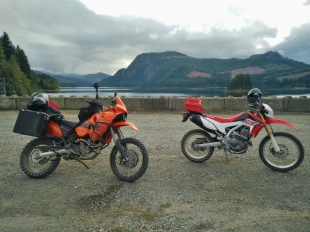 Our annual motorcycle ride wasn’t to be this year; although we did manage to do the Port Renfrew Loop one afternoon, and Chris and his sister Joy did much of the island portion of the offroad Trans Canada Adventure Trail. They loved it, even though some sections were closed due to fire hazards. I can’t wait to try it next summer.

Afterwards, Chris limped home on his bike, and then spent the next couple of weeks bringing it back to life. By the time all the new parts arrived, our riding season was pretty much over. That doesn’t mean I didn’t get out and about, but most of my trips were short hops back and forth to the mainland to visit my dad. Gotta love that bikes get priority boarding on BC Ferries.

My dad had a health scare the night we arrived in Canada from Hong Kong. It meant a five-day stay in the hospital for him as the doctors did tests and sorted out his heart medications. With great care from a number of doctors and specialists, and the team at the Jim Pattison Outpatient Centre’s Heart Health Clinic, dad was back to his usual self by the end of the summer and the doctors seemed very pleased with his progress. I was fortunate to be able to tag along for most of his appointments while we were home. 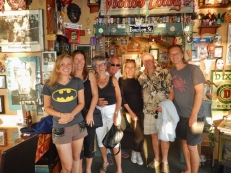 On Chris’ side of the family, we pulled off a successful surprise birthday for his dad at the Brentwood Bay Lodge with all the immediate family making it down for dinner at one of his parents’ favourite spots, Blues Bayou Cafe overlooking the bay.

With Chris keeping himself busy working in the hangar, I decided to get a paid job for the summer. Getting a job wasn’t a problem. Within a couple of weeks of being home, I started training as a cashier at Save On Foods. At just a block from home and part-time, it seemed a great fit. But things went south very quickly after the training finished. For the next three weeks, I was going to be on call. At first I didn’t think that would be an issue, but after being carefree for so long, it turned out that getting called last minute and not knowing when I’d be working wasn’t for me. So I quit.

We hung out with Gill and Tony. One day, Tony even took Chris flying up the coast with a stop for lunch, while Gill and I went to the Saanich Fair with their girls. We caught up with Arne and Melissa. We played Euchre and Pictionary with Mitch and Barb and family. We welcomed Tracy, who we know from Subic Bay, and her son Heath on their whirlwind tour from Seattle to Vancouver, with a detour through Victoria and Sidney. We visited with many of our friends on the mainland at a potluck hosted by Trish and Norm. We also made a second trip to Kelowna to pick up Chris’ new Landcruiser frame.

We had hoped to squeeze in a road trip to Rossland and Banff, but we ran out of time. We did, however, manage to fit in our annual pilgrimage to Fisheries Supply in Seattle, with additional boat-related stops and a bit of fun in Ballard, Oak Harbor and Anacortes. There was also an endless array of deliveries by DHL, FedEx, UPS, Purolator and Canada Post as our many orders of boat parts and accessories arrived and were added to our pile.

It wasn’t all socializing. Inspired by the heart health information sessions that I had been attending with my dad, Chris and I made a concerted effort to go for a walk every morning. Step one: pick up coffee and tea at Alexander’s. Step two: walk down to the waterfront and along the docks at the Port Sidney Marina. It was on one of these morning walks towards the end of our stay that we spotted David Ellis, one of MOKEN’s sister ships (a Diesel Duck 462). We popped by for a visit with Dave and Dorothy and their guests, who were just passing through on their return from Alaska. Small world.

Towards the middle of September we started to wonder what we’d been thinking when we booked our flights. Staying for Thanksgiving had seemed like a good idea at the time. But now, we still had another month to go and the days were getting noticeably shorter and cooler. While we had stellar weather the whole time we were home, with the exception of haze for a few weeks from the massive forest fires burning inland, we weren’t accustomed to the cold on our morning walks. First we put on fleeces. Then the long pants came out. And finally we broke down and crammed our unhappy toes into socks and shoes. It was quite a shock for us. We’re used to living in shorts and flip flops year round.

Finally Thanksgiving arrived. My dad came over for the weekend and together we made the trip up to Nanaimo for a big extended family dinner. Joy and Will hosted, Chris’ parents cooked the turkey (and stuffing and gravy), and everybody added their own contributions to the feast. It was great to see everyone together, and meet Nadya’s boyfriend, Tennessee. We’re hoping they’ll come visit us on MOKEN soon. 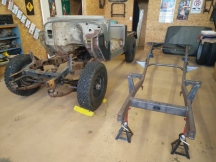 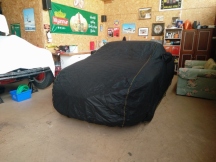 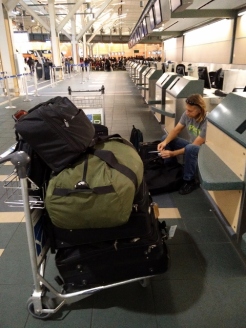 With Thanksgiving behind us, we finished packing up our numerous bags full of boat parts and headed back to the mainland for our final few days.

Back in June, we started our trip home over a dinner of Thai food with our friends Rob and Shelley. And now we ended it with them over an Indian lunch. How intercontinental. Our trips home wouldn’t be complete without all the really good foods we miss most when we’re in the Philippines. Like pho, war won ton, Thai, dim sum, Indian, fresh sockeye salmon, crab, local spot prawns, seasonal fruit. I could go on. And on.

All too soon, it was time to say our final goodbyes and head to the airport. Our packing skills are getting better. With just a little readjustment between bags as we weighed them at the scales, we soon had all five of our checked bags maxed out at 55 pounds each. And that’s wasn’t including our multiple carry-ons and the large Balikbayan box we shipped separately. So many goodies for MOKEN.

With additional photos by Sandy.