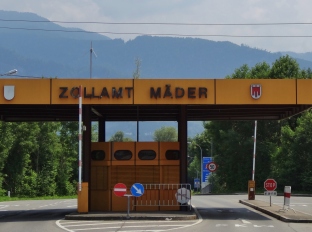 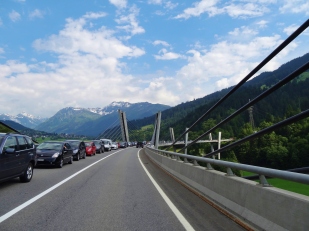 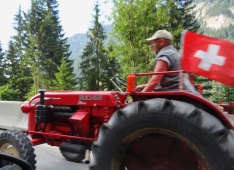 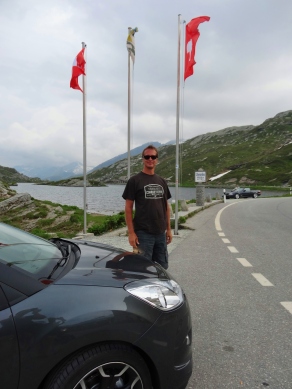 July 7, 2013: As we left the Appenzeller Alps behind us, we descended into the Rhein River valley. Switzerland lies on the west side, with Austria and Liechtenstein taking up the eastern shore. They were so close, we couldn’t resist crossing over and adding two more countries to our drive today.

First up, Austria. My fatherland. We crossed into the far western tip of the country just long enough to stop for lunch at an attractive roadside jausenstation (snack station) near a small lake in the foothills of the Alps.

Liechtenstein was next. It didn’t take us long to traverse this tiny principality from north to south. We zipped along past Schloss Vaduz, the palace and official residence of the Prince of Liechtenstein, parts of which date to the 12th Century, and Schloss Gutenberg. Both Chris and I had been here before, long before we knew each other. Chris remembers hiking up to Vaduz Castle. I probably did too but better recall going hiking near Malbun. Today was just a drive through.

We continued along the St. Luzisteig Pass crossing back into Switzerland near the fortifications of the same name and then opted for yet another detour to see Davos, one of the country’s largest ski resorts, also popular with hikers in the summer. En route, we passed a seemingly endless line of bumper-to-bumper traffic hampered by road construction as they headed home from a weekend of outdoor adventure. We were glad to be going the other way.

The loop through Davos brought us to our final pass of the weekend. The San Bernadino Pass (number eleven, see table below). This is another high mountain pass that you can completely bypass by tunnel, but why would you want to? I can’t say we saved the best for last, but it is a good drivers’ road. Smooth surface and snakey turns with a nice view at the summit. At least I’m sure it would have been nice if it hadn’t been overcast.

As we plunged our way towards Italy, the architecture in the small towns along the way became much more Italian in style. After our final border crossing, we returned to Sesto Calende along the eastern shore of Lago Maggiore just in time to enjoy a late dinner.

Travelling around Europe isn’t quite the same as it was in the days before the European Union was formed. In the early 90s, as someone who hadn’t travelled much before, it was exciting to collect a stamp in my passport as a souvenir of each country I visited. This weekend, our rental car with its Italian plates didn’t even raise an eyebrow at any of the borders we crossed, not even the Swiss ones. (It’s not a member of the EU.) We weren’t stopped, questioned or asked to show our passports. Sometimes we didn’t even see any officials. Very unlike driving between the US and Canada or Mexico. Maybe we could learn a thing or two.

Epilogue: And so, that pretty much wraps up our mini European vacation. Chris passed his course with flying colours and headed straight back to work, while I returned to the Philippines and liberated Nukaat from his holiday at the kennel. A slight deviation from our usual blogging about life aboard MOKEN, but we hope you enjoyed tagging along with us. We certainly hope to make it back again one day to ride some of the many alpine passes on two wheels. All that’s left to report on now is the food. I think I may have saved the best for last!!!