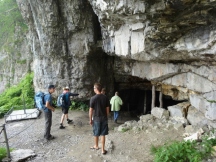 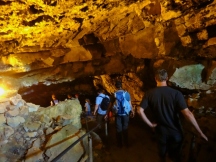 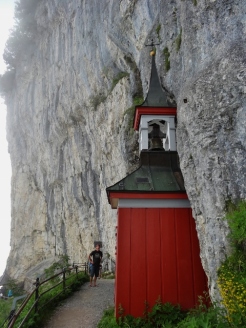 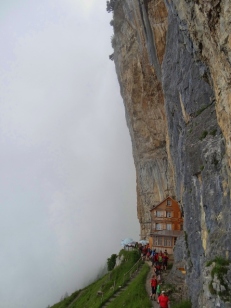 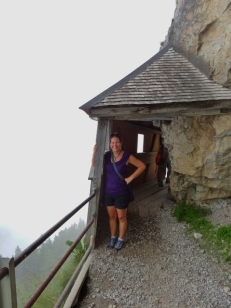 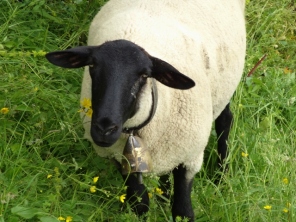 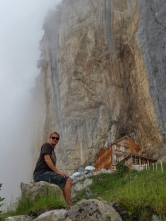 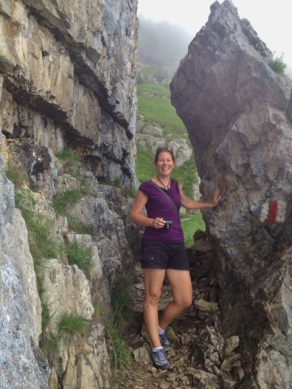 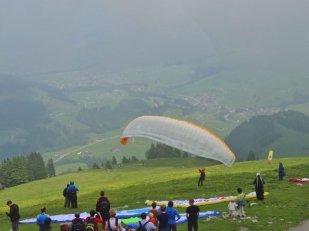 July 7, 2013: After breakfast, we bid farewell to our brilliant hosts and set off on a small detour they suggested.

It wasn’t long before we were skirting the northern edge of the Appenzeller Alps once again, although this time they were mostly shrouded in clouds. Every once in a while, we’d get the briefest of glimpses of the mountains playing backdrop to green valleys and quaint towns as we drove along. Quintessentially Switzerland.

A right turn at the town of Appenzell and a short drive up the Schwendibach valley brought us to our destination. After parking our car in the middle of a farmer’s field, among neat rows of other cars, we walked back to the aerial cable car that would whisk us up Ebenalp mountain. The peaks were clearing to the south and seemed to be the destination of most of the hikers this morning, but Ebenalp off to the north was still wearing her veils. (Lukas and Martina had told us that this weekend was the first warm, sunny weather they’d had all year, so I guess everybody wanted to get outside and enjoy it.)

Expecting it to clear any minute now, we waited for the next available car and clamoured in with all the parasailers and their giant packs, families of day hikers and seniors. In other words, those of us who weren’t hiking up.

At the top of the line, but not the top of the Ebenalp, we scurried out onto a high plateau and took a look at our trail map. Our destination? The Wildkirchli caves. Only 15 minutes away, and all downhill. At least until it was time to get back to the top of the cable car station again.

The narrow trail was full of people in proper hiking boots, wearing layers and carrying walking sticks and packs. I wonder what the prepared hikers thought of us with our inappropriate footwear and summer clothing. It was a little on the chilly side.

Arriving at the cave, everybody seemed to be going in the same direction. We simply followed the crowd like lemmings, in through the upper entrance, spiralling down and coming out about a hundred feet lower through a second opening. Prehistoric Stone Age tools and cave bear skeletons found at the site are exhibited nearby.

This section of the trail dropped off steeply below us with a vertical wall towering above. Around a few more bends and suddenly we spotted a familiar sight. The Berggasthaus Aescher, perched on a teeny tiny ledge between the sheer rock face and a big patio filled with hikers enjoying Sunday brunch. I’d actually come across this small guesthouse online when I was doing some research before our trip. It was a lot smaller than I was expecting, but incredible nonetheless, despite the wall of white obscuring the views that I knew were supposed to be there.

We managed to scoop a couple of empty chairs overlooking the abyss where we enjoyed some icy refreshments and chatted with our neighbour, a young Swiss optometrist who insisted on buying our drinks because we had no Swiss Francs.

We waited, hoping the clouds would part and reveal the secrets beyond. But they never did and all too soon it was time for us to head on our way. Rather than retracing our steps, we opted to continue along the loop trail, climbing through forests and alpine meadows, where we watched some mountain climbers practicing their techniques on the vertical walls.

From time to time, the visibility cleared enough for a couple of paragliders to take to the skies, but not enough for us to see the region’s spectacular vistas. Even so, no complaints here. It was a fantastic detour.