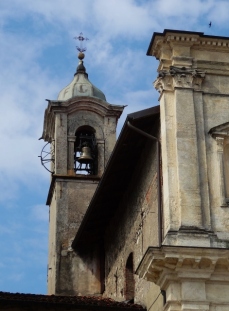 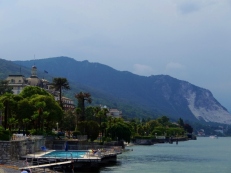 July 1-2, 2013: Even though Chris had to be back in school today, I still had Clio the car until mid afternoon, leaving plenty of time for exploration. After checking out my options, I decided to head north for a peek at Lago Maggiore. Sesto lies at the south end of this lake, which extends 70 kilometres north into Switzerland.

The drive along the western side skirts the shore once you get past the town of Arona. It was aimless driving at its finest with no destination in mind. The views across the lake and up towards the Alps were stunning. And then, when I reached the town of Baverno, I simply drove in a full circle at a roundabout and turned around.

All along the route are beautiful old villas, parks, historic towns and impressive hotels, such as the five star Grand Hotel Des Ilês Borromées which opened in 1863 and received guests the likes of Alexandra, Grand Duchess of All the Russias. It also features in Hemingway’s novel “A Farewell to Arms”.

After a quick stop in Stresa, one of the famed stops on the Orient Express route between Paris and Istanbul, for some pictures and a more lingering stop at the Strobino Panetteri Amore in Arona for a late morning coffee and pastry with views of La Rocca di Angera, it was back to Stresa and an afternoon appointment at the self-serve laundromat. Lucky for me, it’s just a few steps from our hotel with an incredibly convenient bistro right next door.

That’s probably where I hatched the plan for celebrating our anniversary, which was the next day. A little online research and I made a dinner reservation at a Michelin one star restaurant with good reviews.

The next evening, we hopped aboard the regional train heading back up to Stresa, just 27 minutes away. We strolled along the waterfront and wandered through the town and the myriad little shops selling everything from wine, handmade soaps and silk scarves to hand-blown Murano glass jewelry and specialty pasta, eventually finding Ristorante Il Vicoletto. At seven, we weren’t the first guests to arrive, but pretty close to it. By nine, the place was packed.

The atmosphere was very welcoming, the service impeccable and the food incredible, although by the time we finished our appetizers, first course dishes and mains, we had absolutely no room left for dessert. And so, with plenty of time to spare before the late train back to Sesto, but with bellies too full and legs too lazy to carry us around anymore, we lounged around at the station. Maybe not the most auspicious end to a memorable evening, but still an interesting way to celebrate eight years. Happy Anniversary!