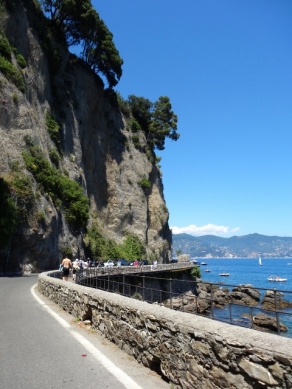 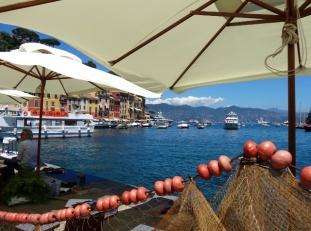 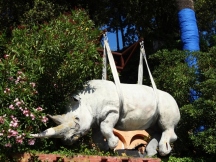 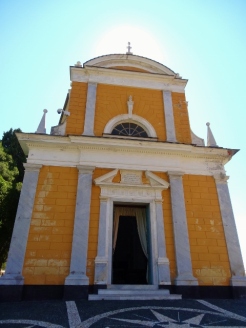 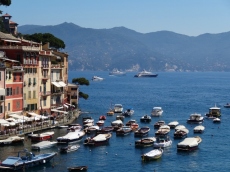 June 30, 2013: Just a few twisty kilometres away on the peninsula south of Rapallo is the small town of Portofino, situated on a tiny protected harbour. Hence the name. Portofino means “fine port”. Even though we’d only been away from MOKEN for a week, we set off to get ourselves a nautical fix.

Getting there was fun in itself. Along yet another winding, narrow road that hugs the coastline, we drove first through Santa Margherita Ligure, home to luxury hotels and beaches that would soon be packed with people. It was Sunday, after all.

Arriving reasonably early in the morning, we ambled into the piazza for our first views of the harbour. We expected lots of boats but we were pleasantly surprised to discover a boat show too. With most tourists not arriving until later in the morning, we practically had the place to ourselves for the first hour as we strolled along the waterfront, checking out the yachts and the Marina di Portofino, and trying to imagine MOKEN moored here. It wasn’t too difficult!

We stopped at a nearby café to enjoy a Latte Macchiato, but when the first of the tour boats arrived from Santa Margherita and off-loaded their passengers, we escaped up into the hills surrounding the town. First stop, the Chiesa di San Giorgio (Church of Saint George) for views back down to the port and across to the other side of the peninsula. Then we wandered past Castello Brown, which was built in the 16th Century as a fortress to protect the harbour, before continuing on our way to the Faro di Portofino, the lighthouse at the point.

The views out over the Ligurian Sea, the Gulf of Tigullio and the Mediterranean were incredible, with the water changing from the deepest of blues to bright turquoise and green as it neared the cliffs. We even spotted a couple of boatloads of divers at the point and another spot nearby. The water looked clear and inviting, but judging by the thick wetsuits and drysuits they were sporting, including hoods, we guessed it wasn’t particularly warm.

Back in town and parched after our walk, we sat down at a waterfront table for an icy beverage and watched as the throngs of people strolled the waterfront. Sticker shock set in when we asked for a lunch menu. You don’t just pay for the food here, apparently. You also have to pay for the view. Add on the coperto (cover charge) and wow. We hastily made a retreat to a red checker clothed patio table at a cute little pizzeria just a few steps off the piazza, where our wallets breathed a huge sigh of relief and we enjoyed a tasty lunch of pasta and seafood.

Afterward, we took one more turn along the waterfront before returning to Clio the car for the long drive inland to Sesto. No more superhighways for us. We randomly picked a secondary road heading into the mountains and crossed back over to the farmland and villages of Lombardia. Not the quickest route by far, but certainly very interesting, especially when I turned off the GPS. That was when I decided we should cut over from one secondary road to another one on what couldn’t have been more than single lane farm roads, navigating only using Google Map on my iPhone. We eventually made it with only a few wrong turns!