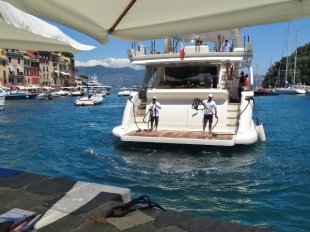 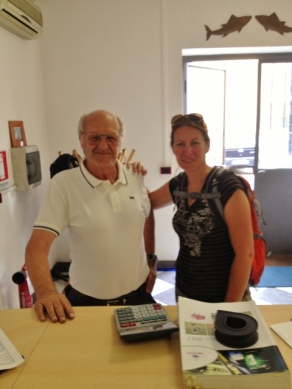 July 3, 2013: We may still be light years away from taking MOKEN to the Mediterranean, but that doesn’t mean we’re not planning ahead. All those idyllic picture postcard harbours in Turkey, Greece, Italy and Spain come with a new set of challenges for our crew. The Med tie.

Med tying, or Med mooring, is the most common way to dock at marinas around the Mediterranean and some parts of the South Pacific too. Instead of tying alongside a dock, or in our own slip as we currently have the luxury of enjoying in Subic Bay, Med tying involves dropping your anchor and squeezing your boat into a small space between two other boats, with fenders as the only defence between hulls, and tying stern to the dock. That means backing up, people. In close quarters.

Now for those of you landlubbers who don’t know it, reversing a single engine boat involves things like prop walk, where the boat tends to want to go somewhere other than where you want it to. Add in wind and current, and voila, you have a recipe for some interesting docking manoeuvres. (As an aside, if you ever want some cheap entertainment, visit any marina and watch as boaters try to dock. It can range from impressive to hilarious to downright frightening at times, even when simply docking alongside.)

And as MOKEN weighs some 35 tons, it’s not easy to simply manhandle her into place.

Even once you’re moored, the challenges don’t stop there. Wind, current and wake can put additional strain on your windward stern lines, making for uncomfortable stays. Not to mention that your neighbours are so close you can literally reach over to borrow a cup of sugar.

While we were in Rapallo and Portofino, we got a firsthand look at Med tying. Like all seamanship skills, Med tying will take practice to perfect. Fortunately, many marinas now have pick-up lines in place, so dropping anchors is avoided and makes mooring less stressful on all concerned. Plus it removes the risk that a boat leaving the anchorage picks up the anchors of all its neighbours when hauling up its own.

Another interesting feature we noticed on most of the boats tied stern to, were springs (like shock absorbers) in the lines between the boat and the bollards or cleats on shore. At the Portofino boat show, we talked to one company that sells these and they put us in direct contact with the manufacturer, and as luck would have it, they just happen to be located in Milan.

We decided the springs were a must have, so today I hopped the train into Milan and then took the Metro to the Douglas Marine factory. After a tour of the shop floor by owner Marino Douglas, I loaded up my daypack with two Master Mooring springs rated to 55 tons, two mooring belts, two polymer cleats and an anchor clow.

Now we just have to figure out some sort of gangplank contraption (known as a passarelle) to get ashore. It’s a common feature on yachts in the Mediterranean, but take a walk around any marina in Sidney, BC or Subic Bay, Philippines and you won’t see any. Not to worry, I’m sure Chris will have that sorted long before we need it.