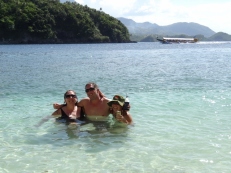 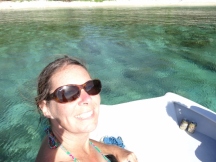 March 20 – April 5, 2013: Our friends Grant and Wendy arrived in Subic the day after my dad’s departure. A whirlwind tour of the Olongapo market wrapped up with a stop for refreshments at a newly opened Japanese-Romanian owned Irish pub. Only in Subic!

The next day, after topping up MOKEN’s fuel tanks with 3,000 or so litres of diesel, we set off late in the day for Puerto Galera. We overnighted in Port Bininga just outside Subic Bay with flying fish showing off in the early evening.

The highlight on the way down was our regular stop in Hamilo Cove. This time, we called over a local fishing family and bought their entire catch of fresh crabs. After boiling for one minute, per their instructions, we had a real feast. Super tasty!

PG was meant to be a quick diving stop before we headed further south to northern Palawan province and the Calamian group of islands. But even best laid plans sometimes change and we ended up staying for two weeks.

We had a chance to catch up with friends old and new before saying goodbye to Grant and Wendy, who headed off for adventures elsewhere.

Our friend Sachi joined us for a few days of diving before she flew home to Japan. After Richard and his sister Dawn arrived from Canada, we spent a fun afternoon beach hopping and snorkeling by dinghy with them and Philippe. And we met up with Helicopter Bob and Flora, saw Snooky, reconnected with Paul and Cherry at South Sea Divers and hung out with Lars and Anna and the gang at Simone’s Kitchen and Lita and Ilene at Le Bistro, enjoyed a fabulous lunch at Alan and Suzie’s, ate too much at New Orleans Restaurant (Dave’s smoked bacon and prawn pizza is the best pizza we’ve ever had ANYWHERE) and at the PG Yacht Club’s Friday night BBQ with Jill and Andy.

Whew, with all that action, it was finally time to go someplace a little more relaxing. So we upped anchor at 3 a.m. on April 6th and set off for northern Palawan. But that’s a whole other story for another time.

But here’s a preview. We brought along an entire kilo of Dave’s home smoked bacon to tide us over until we can get back to PG.