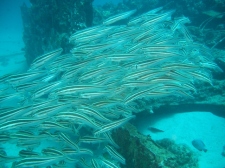 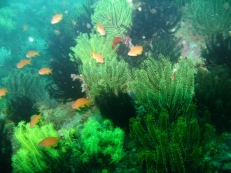 January & March 2013: Sabang is a crazy place. There are dozens of dive shops scattered along the beach. Dive boats of every shape and size zip newbie and experienced divers alike to sites all around the Puerto Galera peninsula. You name it, they have it. Drift dives. Deep dives. Walls. Wrecks. Canyons. And relaxing coral gardens. The fish life isn’t as plentiful as it once was, but the coral is still in remarkably healthy condition. The only disappointment is seeing dive guides and guests alike carrying poking sticks and using them for purposes other than simply pointing out creatures of interest.

Chris first came to Sabang in 1998 and we returned together for a dive holiday in 2005. Now that it’s just a short two-day hop from Subic Bay for MOKEN, we’ve already been twice this year. First with our friends Tara, Bryan and Joan in January. And again in late March with Grant, Wendy and Sachi.

We always return to South Sea Divers and their team make it effortless.

This time we dove Monkey Beach, Sabang Point, Coral Cove, Skydive to Hole in the Wall and Pink Wall, Sinandigan Wall, the Elma Jane Wreck to La Laguna Point and the Sabang Wrecks. And we barely even scratched the surface of all the sites in the area. I guess that leaves us some new sites to explore next time around!

We should really pull out the fish ID books and figure out the proper names of what we saw, but here’s a little sampling. With the exception of the photos taken by Joan, these were all taken on an eight year old Casio in a little underwater housing, which came back to life after a failed attempt to use it in Subic Bay. Because it has a long delay between pressing the shutter button and actually taking a picture, it’s a lot easier to take macro still lifes than pictures of fast moving fish and panoramic shots. So this is only a taste of what’s actually down there.

Now we just have to get our new Sony camera in its Ikelite housing with twin lights up and running.

3 responses to “Diving in Sabang”