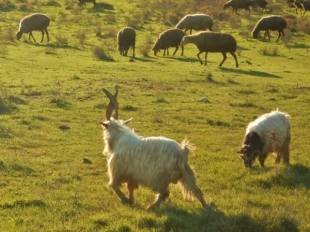 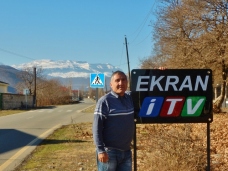 November 27, 2016: On my last weekend in Azerbaijan, Chris and I once again loaded ourselves into Medjid’s car early on a Sunday morning for one final drive up into the mountains. This time our destination was the Shadag Ski Resort and the nearby mountain village of Laza.

Of course, no roads take us directly to our destination without first encountering some interesting diversions. Today was no exception. On the drive out from Baku, our first stop was the “plane restaurant” overlooking the Gudiyalchay River near the Jewish village of Qirmizi Queseba and not far from the city of Quba. 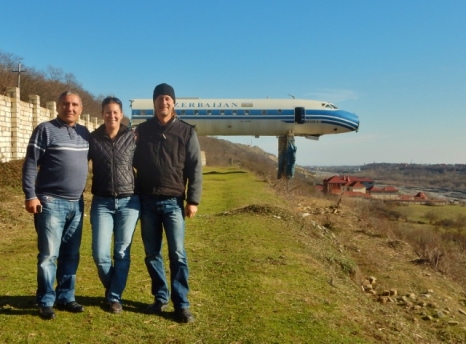 It was reported in the news a couple of years ago that the restaurant was open, but when we arrived, it was clear that the project had been abandoned and was still a long way from completion. Apparently the front half of this plane was brought to this vantage point and placed precariously on top of some rather sketchy pillars. And that seems to be as far as they got. This is definitely one of the most bizarre roadside attractions I’ve seen anywhere. 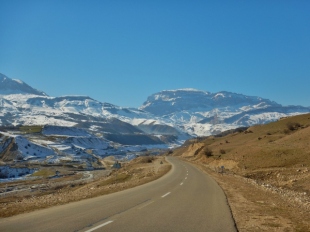 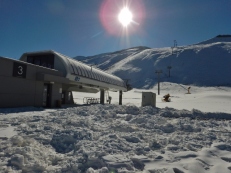 Back on the road, we continued on to Shadag Ski Resort. The drive up to the mountain was stellar. Blue skies, snow capped peaks and a curving mountain road where we dodged shepherds herding flocks of sheep from one pasture to another.

At the resort, everything was closed up as the season hadn’t opened yet but we trekked through the snow and took some obligatory snow pics along with all the Azeris up from Baku for the day in their city shoes. 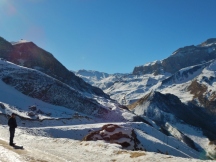 From here, we actually had to drive up some unmarked mountain roads to get to the village of Laza situated in the valley behind the ski resort. At first we weren’t sure if we could get there as the road varied from dirt track to snow to sheer ice, but in the end Medjid’s careful navigation got us through and we made it to a small restaurant which had its own stocked trout farm and heated huts with views of the valley and the spectacular albeit frozen Laza waterfall.

After a feast of grilled trout and lamb we trekked up to the waterfall where Medjid and Chris spied a wolf den and fresh tracks leading here and there. Luckily for all of us, there was nobody home at the time.

From there it was a return drive back over the mountain pass to Shadag and another detour, this time taking us to the town of Samur on the Russian border, before retracing our route all the way back to Baku.

And so that wraps up our latest Azerbaijan adventures. We owe a great deal of thanks to Medjid for always being such an enthusiastic and willing tour guide, ready to share his love of Azerbaijan, the mountains and the freshest, local foods with us.

Did you know that this was also Chris’ last trip to Azerbaijan? Just a couple of weeks after I returned to the Philippines, Chris completed his final tour of duty in Baku. He is now the full-time chief engineer on MOKEN.

2 responses to “A Trip to the Snow”