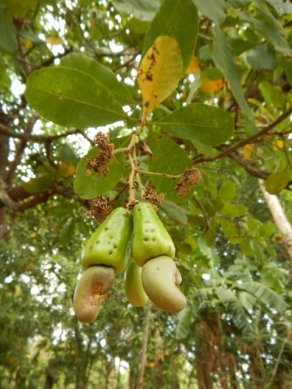 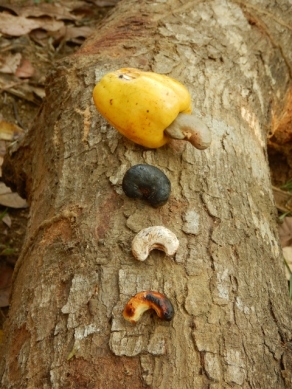 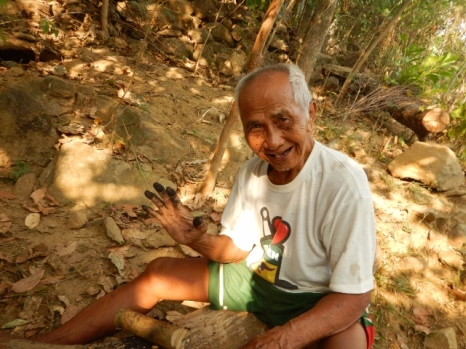 You can’t get much more local than this.

Earlier this spring, I happened to be visiting friends in Pamatawan, about a 30-minute bus ride from Subic. While I was there, Nelia and Merlyn’s father, Tatay Joe, who is 87 by the way, decided it was time to roast a batch of cashews from their tree.

Before this moment, I’d never given any thought to how cashews grow or how they are processed.

What an eye opener this day was for me. As Joe cracked open the shells, Merlyn and I peeled off the bitter, outer skin, revealing the freshly roasted cashews inside. It was hard not to gobble them all up. I resisted, except for the odd broken piece.

After about an hour, we ended up with a small bowl of cashews. It was a lot of work. Sometimes the peels came off easily, other times not so much. It certainly seemed that the well roasted nuts were much easier to peel. Merlyn sent me home with a bag of the freshest roasted cashews. Yum.

Later, as I checked into cashews a bit more, I started uncovering a whole bunch of really interesting things about these nuts. The first one being that they really aren’t nuts at all.

Around Subic Bay, there are a number of ladies that hawk bags of roasted cashews from one of a few different small local cashew producers at very reasonable prices. Of course, when I am running out of cashews, they are nowhere to be found and I am forced instead to buy cashews from the grocery store. Invariably the ones for sale in the shops are processed in Vietnam and elsewhere.

Have you ever seen a cashew in the shell? I still have my first pod tucked away somewhere on MOKEN. At some point I expect it will be confiscated by quarantine officials when we enter a country that has restrictions on agricultural imports.