We’re getting close to the end of our Busuanga adventures in May 2016. 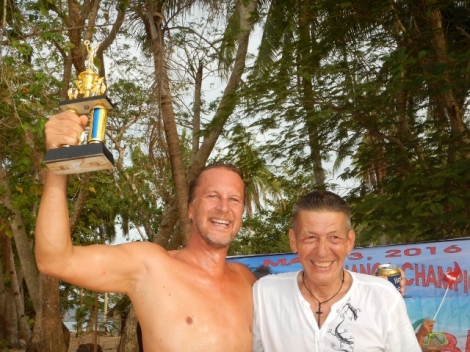 May 23, 2016: Our friends Mike (Tattoo Mike) and Ann in Concepcion invited us to Mike’s birthday party. They rented the private beach on Calambuyan Island for the occasion. Aside from tons of food, including scrumptious roast pork, the event was also billed as the First International Busuanga Tetherball Championships.

The tournament included two levels. One for younger kids. One for kids at heart. There were 34 of us in the big kids category. It was single knock out.

Most of us representing the international contingent sponsored by D’Divers (Daniel from Germany, Charlotte from Denmark and Sandra from Canada) were knocked out in the first round. The Australia representatives (Craig and Velda) opted out. Only Chris (also representing Canada) made it on, carrying all of our hopes on his shoulders.

Chris took out Rasty (Philippines) in the first round and squeaked by birthday boy, Tattoo Mike, (our Danish host) in the second round. That put him up against another Filipino, HonyBoy, in the quarterfinals. Maybe if HonyBoy had removed his man purse for the match, Chris might have had a harder go of it, but he persisted and advanced onwards.

Next up, Chris faced his toughest test of the match against Yasmin (UK) in the semi final. Yasmin proved her tremendous tetherball talent giving Chris his first defeat of the day. That had him vying for third place against the Dane, Luca. It was a close match, but Chris came out victorious.

In the gold medal round, Yasmin was up against David, another of the strong Danish contenders. Sadly for the boisterous Danish contingent, Denmark did not take first prize in the first ever International Busuanga Tetherball Championships. That honour belongs to Yasmin and the UK.

Why this game hasn’t yet made it to Olympic level competition is anybody’s guess.