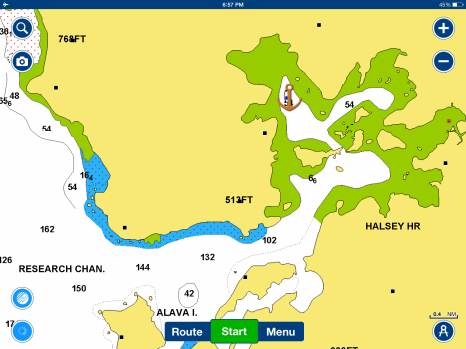 May 19-21, 2016: Several cruisers have told us tales about the giant prawns you can buy from local fishermen in Halsey Harbour. It seemed like a good enough reason to cast off from our mooring buoy at Puerto Del Sol, wave goodbye (temporarily) to our new friends, and make the 32 nautical mile journey around the outside of Culion Island. We love prawns.

It was calm and mostly clear, and a good thing too, as our autopilot chose to be cantankerous today. So we hand steered arriving deep inside Halsey Bay and anchoring off from the river mouth in about 45 feet of water just before 1300 hours. (Anchorage: 11 47.449’ N; 119 57.911’ E)

Getting in to this protected bay was a bit tricky. Our charts showed one island that didn’t exist, parts of another island that weren’t where it was supposed to be (see picture on left, above) and missed out a shallow reef altogether that we could see below us, but not until we actually passed right over the top of it. Luckily, it was not too shallow, but I held my breath anyhow, waiting for the crunch. We are starting to rely on Google Earth overlays more and more (see picture on right, above).

After lunch it started to rain, so we spent a lazy afternoon and evening on board. 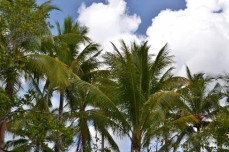 In the morning, the weather was much improved. Chris dropped the dinghy and we went exploring. We headed to the first house along the river to ask about prawns, as we had been instructed. No luck there. As we cruised up the river, we asked a local fisherman and his wife (Samwell and Joann). Again no luck, but they offered us mud crabs instead.

With no one else around to ask, we opted to check out the river instead. Starting out wide but shallow in places near the mouth, we carefully made our way upstream, winding along healthy mangroves as the river got narrower and twistier. Eventually, it ended near a small village, which we later learned has a small school for younger students. Those that go on to finish high school have to travel all the way across the island to Culion town, a long trek.

I usually put together some small gift bags for children that we meet in these out of the way places. When we stopped at the first house again to find Samwell and buy his mud crabs, I gave away a handful of bags to the little kids that we found there. Later that afternoon, a man came to the boat in his small banca with his two children to ask for rice. We gave them rice and a few cans of food (including SPAM) and gift bags for his children. I wonder what they thought of the Basmasti rice we gave them. It was all we had on board. (Note to self: carry a bag of rice in future) 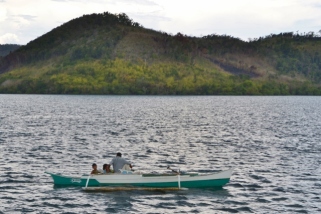 Then it was time to go kayaking around the islets nearby before cooking the mud crabs for dinner. They were certainly sweet but fiddly to get at the meat. A lot of work for a little pleasure.

The following morning, when we got up bright and early, we found another even smaller banca waiting for us with three slightly older children on board. This was Francis, Remedios and Jayme. They had paddled out to see if we had any more goody bags. Obviously, the flip flop telegraph was working well.

Halsey Bay was certainly relaxing, but after thunderstorms and torrential rains combined with a lack of large prawns (that seem to have been replaced in turn by giant jellyfish and that ruled out diving), we decided two nights was enough for us. Plus with no 3G available, we didn’t have a current weather forecast and didn’t want to push our luck by staying too long.

After coffee, we pulled up the anchor and made our way slowly out of the bay. The sun position and reflections on the water made everything look the same dark hue, making it even harder to see the reefs. Time to retrace the track we took coming in, giving a wide berth around the shallow bit. 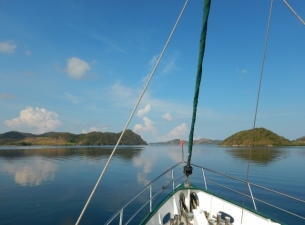 Lucky for us, Chris managed to get the autopilot back online. No hand steering required. As we followed our route back to Puerto Del Sol, we passed the craziest looking fishing banca/mothership I’ve seen yet. There were octopus arms stretching out from it in every direction and smaller bancas rafted up to it. I wonder what they were catching. Prawns, maybe?

Along the way, a rainstorm helped wash off the salt we’d accumulated on the rails and deck before we arrived back at Puerto Del Sol in time for a late lunch and an afternoon spent poolside at Al Faro. It’s good to take a break, but it’s also good to come back to civilization again. After the remoteness of Halsey Harbour, PDS seemed positively sophisticated. Now, if only they had 3G.

I’m always looking for ideas of what to include in the gift bags for kids. If you have any suggestions on what items would be most appreciated in out of the way places, please leave a comment below or drop me a line. Thanks for your feedback! 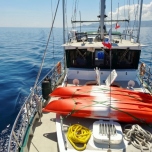 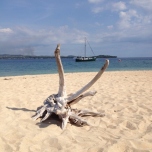