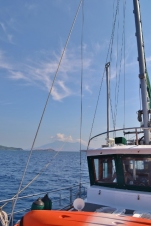 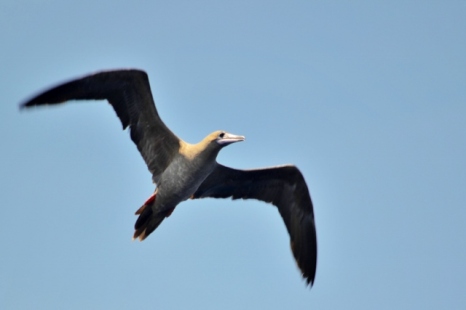 April 29 – May 4, 2016: With an afternoon thunderstorm hovering over the mountains around Subic Bay, we decided to make a break for it and head out on our next cruising adventure. Destination? The Calamian Islands of northern Palawan. So far, our favourite cruising grounds in the Philippines.

We encountered some white caps in the bay and some spray breaking over MOKEN as we rounded Grande Island on our way to our first overnight anchorage in Port Binanga. Before washing the salt off the rails, our first order of business was a swim. Or to be more precise, a float. With her bow pointed into the wind, the chop moved past MOKEN on either side, but the area behind the stern is well protected from the sea conditions, making it the perfect spot to take a dip.

By the time sunset rolled around the wind had dropped off to nothing and the seas were flat calm. We slept in the cockpit, waking up from time to time when the bancas passed taking fishermen on their way to and from the fishing grounds outside the bay. You can hear a motorized banca coming from a long way off. (Port Binanga, Luzon Island anchorage: 14 44.221N, 120 15.680E)

We awoke at first light to an incredible array of birdsong coming from the jungle on shore and we were on our way by 0600. Unlike some of our previous attempts, it was a fairly calm, albeit hazy, crossing to Lubang Island, and fairly uneventful except for dodging the omnipresent fishing buoys and dolphins. We saw dolphins twice actually, but each time they were busy feeding and ignored us.

By mid-afternoon we had arrived at Port Tilic on the north side of Lubang. With waves breaking on either side of the entrance to the bay, we were glad to have the sun behind us to give us a good view of the shallow reefs all around as we made our way in a sweeping S pattern to the left side of the bay. (Port Tilic, Lubang Island anchorage: 13 48.958 N, 120 12.475E)

This is a much more sheltered bay than our previous anchorages on the southern coast of Lubang. However, sheltered also meant there was no wind. So it was dead calm and hot. Although we really wanted to go swimming, the water here didn’t look too inviting with lots of translucent critters (suspected stingers) floating about. Neither of us was brave enough to take the plunge. Instead, we kept moving around the deck chasing the ever elusive shade.

The next morning we slept in until nearly 0600, almost unheard of. Usually Nukaat wakes us at first light to remind us not to forget about his breakfast.

Today’s cruising took us around the east side of Lubang through Ambil Pass and Golo Pass, new territory for us. We got a really strong 3G signal near Looc Bay which gave us an opportunity to check the weather forecast and even upload a blog post complete with photos.

Golo Pass is quite narrow between two shallow reefs. When we get to places like this, it’s my job to stand at the bow and watch for the colour changes that indicate shallower water. Luckily the sun was cooperative and we found the safe route through, never once in water less than about 40 feet.

From here it was a straight run to Cape Calavite on Mindoro Island. The winds were favourable so Chris hoisted the main sail and we made good time on the crossing. At least until the winds died off as we approached Mindoro. Here we spotted two sailboats (which we later discovered were heading from Puerto Galera to Apo Reef and on south to Palawan and Kudat in Malaysia). We watched in amusement as they dropped their sails too and started their engines.

As we made our way down the coast of Mindoro to Mamburao Bay we found a couple of stowaways on board. A moth and a dragonfly each hitched a ride. Nukaat was unimpressed, preferring to curl up in his basket and snooze. He doesn’t much like it whenever the engine is running.

The highlight of this stretch was a pod of dolphins that we first spotted doing synchronized aerobatic leaps ahead of us. They quickly had us surrounded. With MOKEN on autopilot we ran to the bow to watch in awe as they played in our bow wake. I don’t think I will ever tire of that.

This was also where our engine room exhaust fan (the one that sucks the hot air outside) decided to pack it in, so I took over the helm while Chris swapped it for one of the spares that we know to keep stocked on board. It’s not the first time this has happened. Making the change is hot work, as Chris had to reach in through a narrow access door where the hot air is coming up from the engine room below. 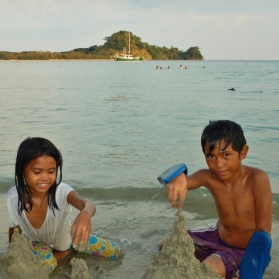 After a swim, we kayaked to shore for a look around. Before we had a chance to offer our kayaks to the groups of teenagers splashing in the water, a couple of them approached us and asked if they could give it a try. Before we knew it, the boats were the centre of attention with dozens of teenagers, kids and even the occasional adult taking turns, sometimes simultaneously.

As we wandered around the beachfront, which has changed a lot since our first trip ashore a couple of years ago (see post here), we became the centre of attention. We had to stop for the obligatory photo ops with groups of men from the trike drivers’ association, who were having a meeting/party on the beach. Then we met some Filipino gentlemen who worked in the offshore oil industry and they invited us to join them. As we walked further down the beach, other groups stopped us to ask where we were from and invited us to join them too.

Before we knew, it was time to head back to MOKEN as the sun was sinking low on the horizon. But first we had to retrieve the kayaks from the kids who were still busy paddling around the bay. They were definitely a hit.

Underway again the next morning, we enjoyed a calm crossing to Apo Reef. With no wind, there was no sailing and it was hot, hot, hot. Kitty started breathing fast early on, so spent most of the day in his basket with a wet tea towel draped over him or out on deck with me in the shade trying to capture some of the breeze that’s generated from our forward movement. He only perked up whenever one of us shook his treat jar. Afterwards, he slumped back into resignation. He gets lots of treats underway to help lift his spirits. Luckily, he perks up again as soon as the engine is turned off.

There were a couple more stowaways today. This time a small bird (maybe a finch or a sparrow) and more moths. Today’s highlight was a seabird (possibly a Juvenile Red-Footed Booby) that flew around MOKEN for about 15 or 20 minutes, occasionally diving into the water, riding the thermals and swooping past in graceful fly bys, always with his eye out for fish or squid in the waters around us.

We arrived at Apo Reef around noon and with calm weather and a good forecast for the next couple of days, this time we actually decided to stay. We’ve had similar good weather at other times but were usually on a schedule to get back to Subic so Chris could go back to work.

Apo Reef is the second largest reef in the world, after the Great Barrier Reef in Australia. It covers a huge stretch of area and is located 15 NM west of Mindoro and 30 NM north of Busuanga. There is one small island, one rocky islet and some rocks exposed at low tide. We entered the protected anchorage area and headed inside about 3 NM looking for water less than 80 feet deep in which to anchor. It was all deeper than that, so we turned around and anchored closer to the same two sailboats we had spotted the previous day near Cape Calavite. Here it was 67 feet deep, but there were shallower mounds all around us which we could see by the colour changes in the water. It was very clear. (Apo Reef anchorage: 12 40.849N, 120 27.317E)

We had arranged to meet Brian and Donna here and do some diving. They arrived not long after us from Puerto Galera on the trawler, FURTHER, and we took our dive gear over and joined them on board for sundowners.

The next morning, Brian took FURTHER around to a mooring buoy on the far side of Apo Island and we followed along in our dinghy. The water was flat calm with just a very slight swell and the weather was sunny and clear. Absolutely perfect diving conditions.

With Donna remaining on board, the other three of us geared up and took the plunge. Twice. The water was crystal clear and incredibly warm. Almost right away we spotted a couple of reef sharks (both white and black tip) and a large ball of barracudas, probably somewhere around 100 of them. Not to mention turtles, large tuna and dozens upon dozens of different types of colourful reef fish. Chris even spotted a sea snake.

Thanks to the numerous mooring buoys around the island and the reefs protected status as a marine reserve, there is no fishing allowed. The reef is healthy and the fish life is abundant. Another one of our new favourite dives in the Philippines. Guess we should have taken a camera with us on these dives.

It doesn’t come cheap though. We stopped at the island afterwards to pay for our anchorage and diving. We don’t mind paying as long as the money is actually being used for conservation and maintenance of the mooring buoys.

We said goodbye to Brian and Donna as they continued south, agreeing to meet up later in Coron, and spent a lazy afternoon on board. The couple off one of the two sailboats (Julian from France and his sailing partner Sabrina from Taiwan) popped over later in the day to ask us for an updated weather report as there is no 3G at Apo Reef. They were waiting for more wind so they could continue on their way south.

The next morning we were ready to depart bright and early at 0530 for the trip to Coron town. It took Chris a bit of manoeuvring to disentangle our anchor and chain from the coral below. Hopefully in future the park will use some of the money collected from yachties to install mooring buoys in the anchorage area to help protect the reefs.

It was a calm and hot crossing to Tara Island and from there south along the east coast of Busuanga. It continued calm until just before we entered Coron Passage. Here we encountered big, steep swells close together. At least it only lasted a short time before we turned into the calm waters of the pass.

We arrived in Coron before 1500 and the sun overhead provided a good view of the reefs as we wound our way around the shallow spots to our usual anchorage. (Coron, Busuanga Island anchorage: 11 59.634N, 120 11.818E) 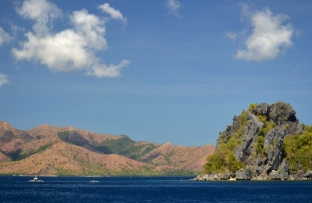 We met Brian and Donna for appies and drinks at Sea Dive before they headed off to the hot springs and we went to our favourite restaurant in town, Sinugba Sa Balay. The owner, KT (or Cat), gave us a warm welcome back and recommended the fresh octopus sisig and blue marlin in black bean sauce. While I usually don’t like to eat octopus, I have to admit that both dishes were incredible.

It was good to be back in the Calamian islands.

Up next, we head to Puerto del Sol and do some repeat wreck diving.