April 25-28, 2016: It’s always a bit of a mad rush when Chris arrives back on MOKEN and we want to get out cruising as soon as possible. The end of April was no exception. There were last minute boat projects, farewells to new friends who were heading offshore on their own cruising adventures, the usual provisioning, a political rally for the upcoming presidential election, and even a trip to the emergency ward. 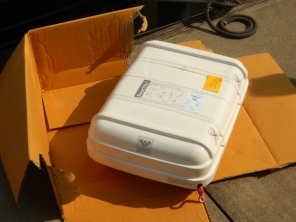 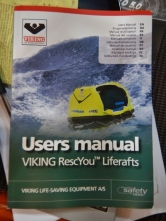 The Good
Jeff and his crewmate Jordan from our sister boat, MOBY DUCK, returned from a voyage to Hong Kong and back with a large present for us. With them, they brought our new Viking RescYou Liferaft, which had been patiently waiting there since December for a lift

That act of generous stowage led to an evening of celebration and farewells at Texas Joe’s Rib House with Jens and Allyson of S/V ESCAPADE (heading off to Taiwan and Japan) and Jeff and Jordan (heading east across the Pacific to the USA via Palau and Micronesia). While it’s sad to say goodbye, we can always keep in touch via blogs, Facebook and email.

The Bad
A few months back, after the return from our Romblon trip, I’d taken all our scuba tanks in for air fills at one of the dive shops in Subic. As the valve on one of the tanks was leaking, I took it to a different dive shop for repair. Johan’s Dive Center in Barrio Baretto fixed it but informed me that the tank had dirty air. When I checked the other five tanks, they were all equally bad. I guess the other dive shop wasn’t changing their filters regularly. Luckily we discovered this well before our next trip, where we planned to dive Apo Reef, located in the middle of nowhere.

Before my spring trip to Canada, I hauled all the tanks to Johan’s for cleaning, giving them a month to work on them. Upon my return, I went to pick up Nukaat from his home away from MOKEN and collect the tanks from Johan’s. But despite my follow-up email from Canada that led to an assurance that they’d be ready when I got back, they still hadn’t been cleaned. In fact, I suspected nothing had been done to them yet, leaving dirty air in the tanks for all that time (something Johan himself had told me was not good for the tanks). I was livid but ended up giving them another week to sort them. Our time and options were limited.

One of the first things we did when Chris arrived back in Subic was to go to Johan’s to pick up the tanks. This time, we found them cleaned and refilled but missing the visual inspection stickers that they had put on the tanks last October. The stickers are supposed to be good for a year. Johan was nowhere to be found, out with one of the dive boats, and it took the staff some time to reach him by cell phone. When they did, Johan said the air quality in the tanks did not meet his “quality standards” so he removed his stickers. By now Chris was livid too as the inspection in meant to look for cracks and corrosion. The air smelled fine to us so we don’t think the stickers should have been removed since we’d already paid for them. I found it a little suspect that Johan would remove the inspection stickers from the tanks but still filled them with air. It seemed contradictory. Now we would have to get new inspection stickers somewhere else…at an additional cost…before we could get additional air fills. But at least we had six tanks full of good air for our trip to Apo Reef. We definitely won’t be going back to Johan’s anytime soon.

Bad air wasn’t the only bad thing that happened. After making a few modifications to the stainless steel cradle that came with our new Viking liferaft, Chris mounted it on the aft railing and then enlisted the help of a couple of crew members from our neighbouring yachts to get the new raft on board MOKEN and installed into the cradle. Kind of. It turned out that the cradle was too small for the raft. Chris jerry-rigged the straps and added a few extra tie downs to keep it in place as there was no time to fix the cradle before we planned to leave. I contacted the Viking distributor in Hong Kong immediately, but after an initial request for photos and measurements, and a subsequent email informing me that my contact at Viking was no longer with the company, I have heard nothing else, despite repeated emails to request a solution. The excellent customer service experience during the ordering process had suddenly turned sour. 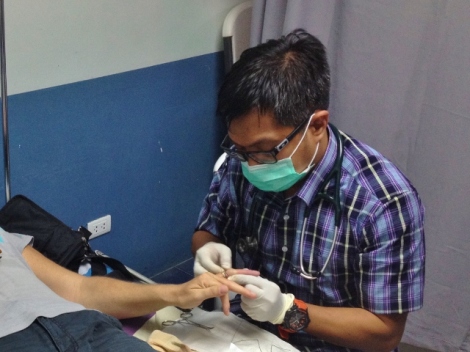 The Ugly
With our provisioning complete, we were just about ready to head off on our next cruising adventure. And then the unexpected happened. On our final morning before departure, as I was getting off the boat, my wedding ring got caught on a stainless steel latch that holds the boarding ladder in place when it is not in use. I think I was teetering on my tip toes with most of my body weight hanging by the ring until I was able to release it.

The pain was unbearable. Chris thought I must have broken my finger because I was screaming like a banshee, but luckily it was still bendy despite swelling up like a balloon. We quickly got a bag of frozen raspberries from the freezer and headed off to Baypoint Hospital where Chris dropped me off at the emergency ward and dashed off to the stainless shop. By the time he got back, I was already in a room waiting for the doctor.

At first they tried removing the ring by wrapping silk thread  around my knuckle but the swelling was too much. Then they got out the ring cutter, a pair of rusty tin snips. After it was off, the pressure eased up a little and I was slathered in antibiotic ointment, patched and x-rayed. I’m grateful it wasn’t broken, although even now, more than five weeks later, it’s still a bit tender and swollen. We decided rings on boats are dangerous things and removed them all. Afterwards, we joked a fair bit about the dangers of wedding rings in particular as we enjoyed refreshing raspberry smoothies.

I’m not quite sure if this final item best fits in “the good” or “the bad” or “the ugly” category. The Philippines was in the midst of an election campaign as we were getting ready to go cruising. Up for grabs were the roles of president, vice president, senators and members of congress. Three of the five presidential candidates held rallies in Olongapo in the weeks leading up to the election, including the opinion poll leader, Duterte, also known as the punisher. We were returning our rental car just down the street from his rally and weren’t sure if it was a good idea to check it out, or a safer idea to bypass it altogether. We gave it a miss but still managed to snag Duterte t-shirts, wristbands and a giant sticker. He was definitely the most charismatic of the candidates.

Following the election, Duterte won by a landslide. He’s not known for thinking before speaking, he’s certainly not PC, he says he will reinstate capital punishment and give himself immunity from prosecution, and he’s already declared open war on drug dealers, criminal elements and journalists. We’ll certainly have to keep an eye on the situation here in the coming months.

I fear the Philippines may be descending back into the mire of “politics without principle,” what Mahatma Gandhi called one of the seven blunders of the world. Do you think Duterte is principled? Feel free to leave us a comment below.

Gandhi’s Seven Blunders of the World