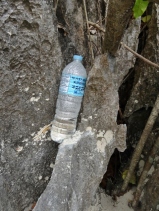 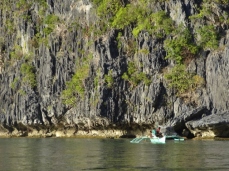 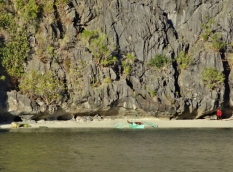 I’m not talking about the amount of garbage left behind by the hundreds of tourists that descend on Matinloc Island every day. There were cigarette butts and plastic water bottles tucked into rocky crevices. We spotted plastic bags full of garbage stuck among the corals. What from afar looked like a pristine sandy beach turned out to be an illusion. When we landed, we found broken glass and discarded toilet paper littered along the beach and in the grass behind. (And that doesn’t even include all the bits of fish nets and other stuff washed ashore during storms.) Couldn’t the tourist-driven island hopping bancas implement a beach clean-up policy…or at the very least adopt a “leave nothing but footprints” philosophy?

I’m not talking about the 200 peso conservation fee that we each had to pay for entry to the islands around El Nido. I don’t have a problem paying a small fee to help with conservation efforts. But most of the people we talked to believe this merely fattens someone’s wallet somewhere in the local government rather than being put to practical use. Not cool.

I’m not talking about the decaying ruins of the abandoned nunnery at Matinloc Shrine. Built in 1982 and left to rot away, as it also slowly fills up with more tourist garbage.

No. As bad as these problems may seem, I’m talking about something worse.

Blast fishing! Are you kidding me?

Blast fishing. AKA dynamite fishing. I knew this was a problem in the Philippines, and many other areas in Southeast Asia for that matter, but I never, ever expected we would witness it firsthand.

I’m sure you can imagine our shock when, at around 5 pm on March 9th, we felt, heard and saw a dynamite blast in the water off Matinloc Island, less than 0.2 nautical miles away from our anchorage. We couldn’t believe it. A spectacular upward spray of water towering two storeys into the air near a small fishing banca that was the only other boat in the area after all the tourist bancas had left for the day.

I was aghast. I was incensed. I yelled something unladylike. I peered through the binoculars. I took pictures. The cell signal was too poor to call so I texted the local dive shop we had used the previous week. I watched mesmerized as two of the fishermen got into the water and started collecting the fish that had floated to the surface. They did not seem the least bit concerned about our presence. I texted the El Nido Coast Guard and waited expectantly for a reply. Nothing.

I had seen this banca earlier in the day. It spent all afternoon resting on the sand near a couple of small thatched huts just around the point from us on Star Beach. I even exchanged hellos with one of the fisherman as he walked down the beach. I snapped a picture of the huts and the banca. I took another photo of the fishing banca when it set out in the late afternoon light, with three fishermen on board, just as we were returning from Matinloc Shrine. It was all very picturesque.

Now I felt betrayed. I don’t know what led these men to do what they do, whether it was greed or desperation or just plain laziness. I don’t really care about their motives. I’m still angry thinking about the destruction of coral reef in such a beautiful spot. In a marine protected area no less.

Blast fishing or dynamite fishing is the practice of using explosives to stun or kill schools of fish for easy collection. Either commercial explosives or improvised homemade devices are used, sometimes placed inside a Coke bottle or a plastic bottle. The blast can be extremely destructive to the surrounding reef that supports the fish ecosystem, which sometimes take decades to recover. Some fish float to the surface for easy collection, but most sink to the bottom and are lost. The explosives can also go off prematurely, causing injury or even death to the fishermen who use them.

According to a 2012 report entitled “Reefs at Risk Revisited in the Coral Triangle” published by World Resources Institute, 98 percent of the Philippines nearly 22,500 square kilometres of reef area is threatened. Threats include coastal development and mangrove destruction, pollution and runoff, overfishing and destructive fishing. We should all be concerned. The Philippines has the third-largest reef area in the world, eclipsed only by Australia and Indonesia.

The report goes on to say that approximately two million Filipinos depend on fisheries for employment, nearly half of them small-scale fishers directly dependent on reef fisheries. Overharvesting estimated to be 30 percent above maximum sustainable yield, capturing immature fish and destructive fishing methods (such as poison fishing and blast fishing) combined with increasing world demand for fresh seafood put the entire Philippine fisheries at risk of collapse.

The coral reefs of the Philippines have been studied fairly extensively, with surveys dating back to the late 1970s. Many of these surveys document a progressive decline in coral reef condition over the past few decades. Reefs with the highest and most stable levels of coral cover are most often found in protected areas. But obviously, as we just saw, even protected status doesn’t stop all illegal fishing. Destructive fishing alone (blast or poison fishing) threatens nearly 70 percent of the reefs. According to Wikipedia, one 1999 report estimated 70,000 fishermen engaged in the practice in the Philippines.

It seems incredible to me that this type of destructive fishing practice still happens. It just so short sighted. But it isn’t all doom and gloom. There are some interesting projects underway to try and halt dynamite fishing.

The El Nido-Taytay Managed Resource Protected Area was established in 1998. It covers a total of 90,321 hectares, of which 40 percent are terrestrial and 60 percent marine, and is one of 28 marine protected areas (MPSs) supported at the national level. As of 2011, there were also more than 1,000 small MPAs supported by local governments. Many are unmapped. About 90 percent are less than one square kilometre.

In 2010, the mayor of Bien Unido town in Bohol province built an underwater grotto along the Danajon reef which was damaged due to excessive dynamite and cyanide use. Two 14-foot statues of Mother Mary and Santo Nino were placed 60 feet below sea level to discourage fishermen from using illegal and destructive methods in fishing and remind people that the sea and its inhabitants are gifts from God that should be treasured and respected.

In 2012, the director of the Philippine Bureau of Fisheries and Aquatic Resources declared an “all-out war” against dynamite fishing and other illegal fishing practices.

We heard that some of the El Nido dive shops had undertaken programs to show local fishermen firsthand the damage caused by dynamite fishing to the area’s reefs. Since most of them can’t swim, they really have no idea what happens below the surface.

Increased protection and enforcement, stiff penalties for those engaged in dynamite fishing, better education of fishermen and the local population in general, better cooperation between all levels of government and the tourism and fishing industries, and the creation of alternative livelihood projects will all be necessary to curb this challenging problem. I hope the Philippines doesn’t wait until it too late.