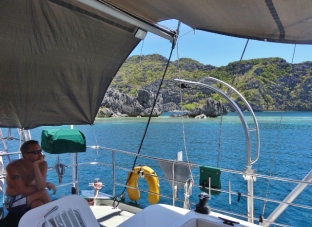 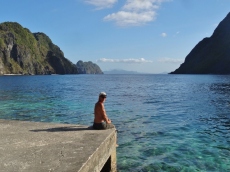 March 9-11, 2015: Approaching the southern tip of Matinloc Island, we didn’t get much of a sense of what lay in store for us. Looking at our chart, we knew it was long and skinny with only a narrow channel separating it from neighbouring Tapiutan Island. Like many other islands in the region, the cliffs rose straight up from the sea, whose depths plunged a hundred or more feet straight down.

As we rounded the southern point and made our way up towards the entrance to the channel, the grey overcast sky made the islands seem somewhat dark and uninviting. At first we couldn’t see any welcoming sandy beaches or protected little coves.

Not surprisingly, we later discovered that the rocks and limestone cliffs of Matinloc Island and the entire El Nido area are similar to those found in Ha Long Bay in Vietnam, Guilin in China and Krabi in Thailand. They are part of an entirely different tectonic plate than the rest of the Philippine islands.

A little further along and we spotted the first island hopping bancas stopped at what we assumed was Secret Beach, a hidden gem that you can only access by swimming underwater through a small opening in the cliff face.

Further still and we began to see more and more bancas filled with tourists, both Filipino and foreign, most of them run up on small beaches scattered along the shores of the two islands. We knew this place would be pretty crazy during the day but hoped the bancas would all be on their way back to El Nido by late afternoon.

After anchoring in about 85 feet of water in an area with a cliff to one side, a shallow reef close by on the other and a sandy beach straight ahead, we spent the afternoon watching the banca show. One boat would tie off at a small mooring on the reef nearby and a handful of tourists would jump in the water and snorkel. Another boat would go up to the beach and everyone would jump off for a photo op. The foreigners were varying shades of white, pink and red, while you could spot the Filipinos by their bright orange life vests which most of them would wear both on the boats and in the water. At one larger beach to the south, at least a dozen bancas were stopped for a lunch break. The parade of bancas didn’t slow down until about four in the afternoon.

In the meantime, we jumped in the dinghy and made for one small deserted beach across the way on Matinloc where I got a chance to snorkel on a very healthy looking reef with lots of fish about. It was decidedly cool getting into the water in the first place, but well worth the initial chill.

Afterwards, we made our way to another of the star attractions on Matinloc Island, the Shrine of Our Lady of Matinloc, otherwise known simply as Matinloc Shrine. It was built in 1982 and included a couple of different statues of the Virgin Mary and stairs up to a precariously sharp rocky outcrop where the views of the channel between Matinloc and Tapiutan were incredible. Matinloc reportedly means “beautiful” in the local dialect, Cuyonin.

Here we met two charming and healthy looking, albeit noisy dogs, one black and white and one golden. There were no other humans about so we weren’t sure where they came from, but they followed us around the place and were very friendly.

We spent a mostly quiet evening and night on the hook. The winds died down completely and we even took the opportunity to sleep outside in the cockpit under the stars.

When the next morning dawned clear and calm, we decided to stay one more night. The biggest ruckus was the barking of the same two dogs from Matinloc Shrine. Only this time they weren’t across the channel. They were on the beach on Tapiutan Island just in front of us. With the sound reaching us easily across the water, kitty was not impressed. How did they get there? I assumed a local fishing boat had brought them over. Little did I know…

That morning we did some kayaking along the reef, practicing taking underwater video with our GoPro without actually getting wet. We discovered that our red underwater filter doesn’t work in shallow reefs, so I had to go back out and try again without the filter. Unfortunately, the reefs along Tapiutan Island near our anchorage were not nearly as prolific with life as the one of the previous day.

Just before noon, the beach dogs suddenly became active again. The golden was pacing back and forth with the smaller black and white traipsing along behind. All of a sudden, the golden jumped in the water and started swimming towards MOKEN. The black and white followed along diligently. We thought maybe they were coming for lunch. But no, they swam right on by and continued on well down the island to the busiest of the beaches where a large number of bancas put in for their lunch stops. We couldn’t believe it. They swam a long way in the hopes of a free meal. Later in the afternoon, they swam back, again with the golden in the lead and hardly giving us a glance on their way past. Incredible! Obviously, these two had a good gig going.

In the afternoon, we put up a tarp over the back deck to provide some shade from the hot afternoon sun and Chris jumped in the water in full scuba gear and wetsuit to clean the hull.

As the day progressed, the winds picked up and changed direction several times, coming from the south one minute, from the east one minute and from the west one minute. This made our anchorage a bit precarious, as it moved us into the shallower water closer to the beach and the reef and necessitated not one, but two moves further out into deeper water. For the rest of the day and that night, the wind changed directions numerous times, coming at us from every direction at one time or another. Needless to say, our second night was not nearly as relaxing as our first.

Despite the wind challenges of day two, overall we really liked this spot. The early morning and late afternoon light was spectacular and at these times of day, we literally had this beautiful place to ourselves.

Would I call it paradise? Almost. Aside from the hordes of day tripping island hoppers, Matinloc also has a dark little secret. More on that next.