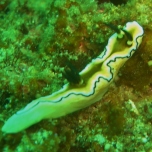 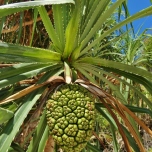 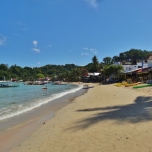 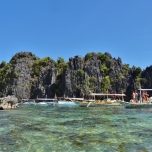 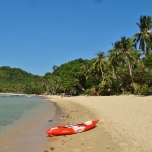 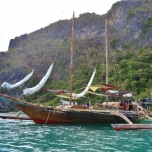 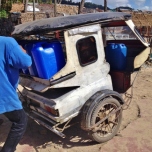 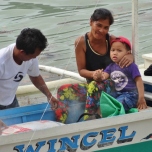 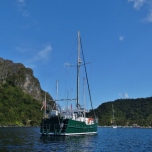 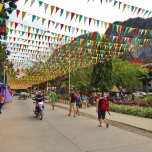 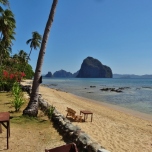 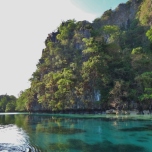 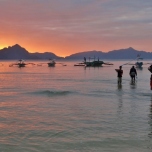 February 28 – March 7, 2015: Our first order of business after setting the hook on our arrival in El Nido was getting the kayaks in the water and paddling to Corong Corong beach. We aimed for some tables and chairs we spotted on shore. It turned out to be Penguin Resto Bar. They had reggae music, comfy chairs, cold beverages and good food. A perfect place to wind down and watch the sunset.

The next morning we put the dinghy in the water and buzzed around the point about three nautical miles to El Nido town proper. We had heard it was a pretty happening place, but in the mid morning it was actually kind of quiet. Most of the hordes of tourists were out island hopping for the day. I’m sure when they all return in the afternoon, the town is busy busy. And it isn’t all that big of a place. We had a quick bite to eat before making our way back around to MOKEN and an afternoon of kayaking.

We’d heard the resort at the point was a good place to go, so that was our objective. It didn’t look all that far but it took ages to get there. By that time, we were hot, parched and hungry, so we ducked inside the restaurant at the point for a late lunch and watched the zipliners scream past overhead to a small island just offshore. Then began our return paddle, this time made a little more difficult because we were heading into the wind.

The next day we took a trike to El Nido, leaving our dinghy near a small cluster of stilted fishermen’s huts along the shore. It’s just a short trike ride. Only 50 pesos. We stopped in at Submariner Dive Center to ask about the diving. It looked like a well run shop.

We inquired about the various island hopping tour routes to identify the highlights among the islands around Bacuit Bay. There are four official routes no matter which tour company you book with, although you do have a choice of a private banca instead of the cheaper option on the big cattle boats.

In the end, we didn’t sign up for any of the tours. Instead, early the next morning, just after sunrise, we hopped into our dinghy and made the four nautical mile crossing to Miniloc Island. It was a calm trip over and we quickly found Big Lagoon, one of the regular stops. It was low tide and a shallow entrance to the lagoon, so we had to don our booties and walk the dinghy through the narrow channel until we reached the deeper water inside. Here we had the place to ourselves. Most of the tour boats don’t leave El Nido until 9 or 10 am, and the low tide kept any early boats out. The water was still and crystal clear, and the cliff walls towered vertically all around us, where birds sang out loudly as they flew from tree to tree.

Our next stop was Small Lagoon, just around the point. Here it was a different story altogether. There were a couple of bancas already in a smaller outer cove when we arrived. We anchored the dinghy, put on our snorkel gear, and swam through an opening in the rock, into a small lagoon. We had to share this one with only a couple of kayakers (they had to duck to get through the entrance). By the time we returned back through the opening, several more bancas had arrived, each one dropping a handful of snorkelers into the water. We went around to a tiny beach to watch the spectacle as more and more bancas arrived. I counted 20 boats, some with just two guests, some with ten or more. We beat it out of there just in time.

We puttered around a few of the other islands in the area before heading back across the bay before the winds picked up. We were back on MOKEN in time for lunch.

We spent another day relaxing, puttering around and checking out the market in El Nido, which is actually located on the Corong Corong side of town and within easy walking distance from where we take the dinghy to shore.

Eventually we did sign up for a three-dive trip with the dive shop. Although we were hoping for a small group, the boat was quite full with 12 divers. On the plus side, each individual dive group was made up of only four divers and a guide. Our young local guide, Freddie, gave very detailed pre-dive briefings and went over more than two dozen hand signals for different fish and sea creatures we might see on the dive. I think he was being a bit optimistic. We were grouped with two other experienced cold water divers from the Pacific Northwest.

The dives themselves, back out near Miniloc Island again, were not exceptional. The water was murky thanks to a recent plankton bloom and remarkably cold. While the coral health was pretty good in some places, it was quite damaged in others, whether due to anchoring damage, fishing damage or typhoon damage, I don’t know. We did see a few cool things, and Chris got a nice turtle video with our Go Pro, but I don’t think we would rush back to dive around the El Nido area again. Maybe we only saw some of the less spectacular sites, because the overall group was so large and included some open water students just starting out. That’s always one of the potential drawbacks of large groups, although we did meet some interesting people from all over the place. There were German, French, American, Canadian, Asian and Palestinian divers on board, including our new friend Ahmad who came back to MOKEN for a quick peek before we headed over to Penguin on the beach for dinner.

Our last couple of days in El Nido were spent getting ready to head off again. We picked up our rinsed dive gear and paid our bill, spent a fair bit of time traipsing around town trying to find 20 litre blue water jugs to replace two of ours that disintegrated from the UV. We’d seen them everywhere another day. But now that we actually wanted to buy a couple, we could only find one. Obviously a popular item. Then we carted all seven jugs to a water store for filling and had a trike deliver the full ones to the beach near our dinghy. Not an easy task for our driver to cart that much weight down a narrow, rocky track. We had to get out and help push. We even made a second trip for another four jugs worth for a grand total of 220 litres. Enough to get us to our next water source in Busuanga.

Rewatering MOKEN is a multi-step process. We clean the jugs and take them to shore to find a water source. Then we have to get the full jugs back and loaded into the dinghy. Back on MOKEN, we take them up the aft steps to the deck and drain them into our water tanks. Life will be much simpler once we start using our watermaker, but until we begin cruising more than we are now, it doesn’t make sense. We can make do with marina water and jug top ups. It does, however, mean we have to be very conservative with our water usage on board.

With our water tanks topped up, we splashed out and washed the windows, tidied up and put everything back in its place, getting things ready for more cruising.

On our last morning in El Nido, we made one final trip to the market for fresh fruit, veggies, eggs, chicken, pork and squid. The market is hopping on Saturday morning, not so much during the week. Best to go early for the freshest supplies.

El Nido is definitely a good base for exploring the beautiful islands around Bacuit Bay and Corong Corong can’t be beat for the incredible sunsets and beautiful beach away from the hordes. As a bonus, there are quite a number of descent restaurants, which makes a nice change from cooking on board. I recommend the Tanigue Tartar at Mezzanine Restaurant. What at first seemed like an odd combination of raw Spanish Mackerel topped with capers actually turned out to be surprisingly tasty. Art Cafe and Aplaya were other favourites, especially the former’s fresh salads and the latter’s seafood sisig. We really wanted to try a place called Jova Moon, rated number one on Trip Advisor and reported run by a Canadian, but they didn’t open until eight in the evening. Too late for us!

After a week of relaxing, kayaking, snorkeling, island hopping, diving and eating, it was time to move along. Next up, we’ll check out a couple of anchorages around Bacuit Bay.