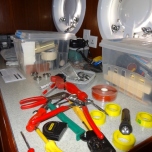 October 30, 2013: While sunny skies have been prevailing over Subic Bay for the better part of October, inside MOKEN it hasn’t been quite so dry. We’ve had a deluge of cascading surges and a flood of overflowing torrents. Okay, that may be a gross overstatement but we have had our share of flooding incidents over the last two weeks. Four, to be exact.

First up was the flood I mentioned in the last post caused by a faulty hose connector under one of the sinks. That one leaked into the space under the salon floor and then overflowed into the engine room bilge.

A few days later, the pump in our shower sump decided to go on a break letting the water overflow into the aft bilge. Then again last Friday, it did it again.

Before Chris even had a chance to finish his newest priority project of changing over to the new sump pump we brought with us from Canada last year (he needs to get a mounting plate made up), on Monday night the bilge alarm rudely woke us up at one o’clock in the morning.

This time the hot water tank burst, flooding the engine room bilge once again. Chris was up half the night dealing with that one. Yesterday, he took the tank to an aluminum shop to get a new bottom welded in place.

So, no showers on board for a few days and no hot water until we get the tank back. It’s rather like camping. Hopefully that’s it for the drama for a good long time to come.

2 responses to “When will the flooding end?”