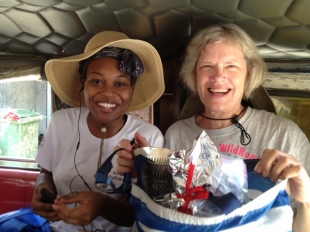 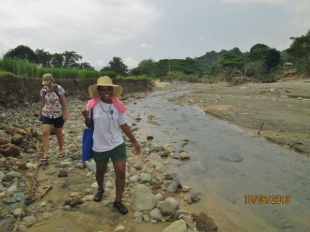 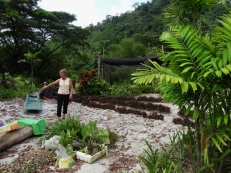 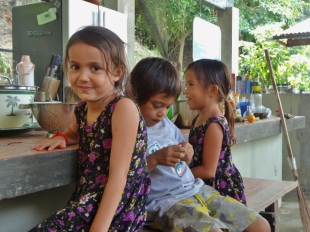 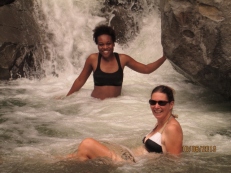 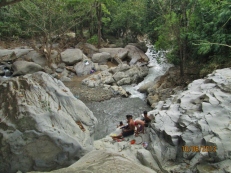 October 6, 2013: On Sunday, my friend Donna invited me to join her and Candace for a trip to a waterfall in the province of Zambales. Both these ladies are volunteers with the US Peace Corps and today was their day off.  The weather was good for a change after all the rain of Typhoon Odette (see older post).

Our first stop was the small baranguay of Sakatihan, about a 30-minute jeepney ride from Olongapo. When Donna and Candace first came to the Philippines last year, they stayed with Filipino host families in this small community as they took language lessons. We stopped briefly to say hi to their host “moms” before walking up river to the waterfall.

We’d heard that the river had flooded homes along the river, and the evidence was everywhere. Thick mud dried on the road. Sandbags piled up in front of some homes. And the road literally washed away in places. Further up, where we would have crossed a bridge to the waterfall trailhead, the road simply ended. The bridge was washed away leaving an Aeta indigenous community cut off from town.

After wading through the now shallow river, we stopped in at the home of a Scottish-American woman who’d also been cut off and flooded out when the bridge washed out. She shared more than a few stories with us about her ordeal and showed us some of the flooding damage. Two weeks later on and she was still without power and road access, but at least her carabou (water buffalo) named Bonnie Prince Charlie seemed happy to wallow in the mud.

Bidding Sherry farewell, we continued upstream to Balon Falls, crisscrossing the river several times. At this point all of our cameras were safely tucked inside Ziploc baggies, just in case we slipped.

The waterfall is a popular spot with local teens who showed off by doing back flips into the water off the rocks. The water looked refreshing so Candace and I jumped in too.

Some photos courtesy of Donna.