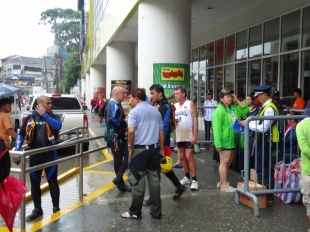 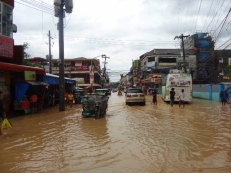 September 23, 2013: Saturday was a pleasant day. It only rained off and on. Saturday night was a bit blustery, keeping me awake into the wee hours and keeping kitty on edge from all the noise of the wind through the rigging. Sunday it absolutely poured buckets all day and night.

I knew something was up on Monday morning when I checked my phone and saw a message from Rolly, who helps me with the boat when Chris is away. “I can’t go to the marina today. There is flooding in my house again,” he said. “Also all over the town. No jeepneys and cars on the road. Lower area is 5ft water level now.”

A quick check of Facebook and the news confirmed the worst. The city had put out a call for help early in the morning, asking for rescuers and advising people needing rescue to hang a white towel or sheet in public view so they could be identified.

Then I got a call from one of our boatie neighbours Greg at the adjacent marina saying their dock (which is located right in front of the river outflow) was half gone and he was stranded on board with no power, water or internet. It wasn’t just the Philippines that was hit. His wife Janise was stranded in Hong Kong, her flight to Europe cancelled. After passing on a message to Janise, I decided to set out to see what was up.

Some pics shown here are borrowed from others’ postings on Facebook, since I couldn’t get to the worst hit area in Olongapo, the baranguay (community or neighbourhood) of Santa Rita. By comparison, Subic Bay got off really lightly and the Subic Bay Yacht Club is business as usual, except most of the staff couldn’t make it in due to flooding. The malls were open too, but most of the stores closed with no staff to open up.

By late this morning, the rains had reduced to showers and the water was already starting to recede. Apparently, the flooding is at its worst at high tide, when the water can’t flow out into Subic Bay. Now the tide is falling. My pics of Gordon Avenue and Magsaysay Drive in Olongapo were taken after the water level had already dropped by more than a foot and traffic was able to start moving again, albeit slowly.

There were rescue workers and equipment everywhere, utilizing everything from vehicles to jetskis and airboats.

Lots of people were just hanging around on the streets, trying to take it all in. I talked to a few of them. One girl said this is the worst flooding she could remember. She’d never seen this much water on Magsaysay Drive. To add to the mess, the power was out in many areas.

And so the cleanup begins.