October 21, 2012: Patrick and Jomari generously gave up their day off to help us take out MOKEN for the first time today. But first we had to install new plugs in the dinghy and wait until the sealant dried. That Livingston tender is heavy. It took nearly all of Chris, Patrick and Jomari’s combined effort to get it off the dock and into the water. At least no leaks! And then a lesson in how to raise it into cruising position using pulleys and winches. With a bit of trial and error, it was bolted securely in place. 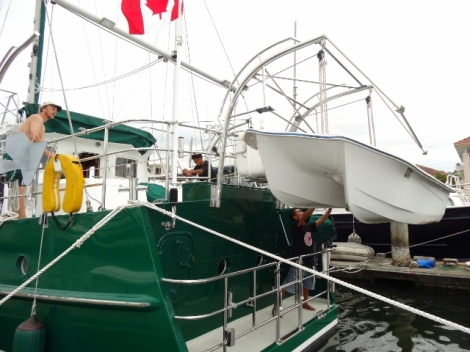 A final few housekeeping items and we’d be ready to cast off. We put away all the loose items inside, removed all the window covers, switched off the shore power and disconnected the water and power cords.

Preparations now complete and we were ready to leave the dock with Captain Chris at the helm. It was a bit nerve wracking at first. The wind was up. But Patrick assured us that it was no problem. The marina sent down two line handlers to help and away we went. 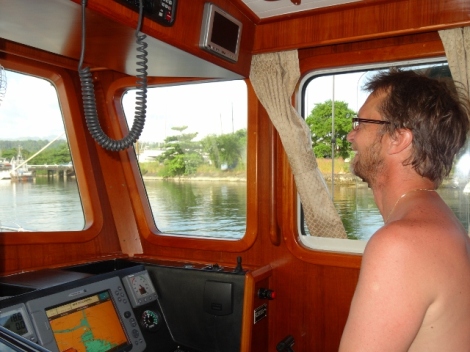 I checked on kitty to see how he was handling the noise and the movement on this, his very first cruise. He did not look impressed when I finally found him hiding behind the door in the aft stateroom, wide eyed.

Once away from the marina and past the dockyards, I took over helm and steered a course to Baloy Beach. Chris went below decks to see why the battery wasn’t charging from the engine. Another glitch and a bit disconcerting.

Originally, the plan was to anchor and go for lunch at the Blue Rock Beach Resort. But plans change. Fortunately the battery started charging out of the blue just before we arrived, so we could drop the anchor and hope to get it up again later. But we chose to anchor further east closer to the Suzuki Beach Resort in about 35 feet of water.

With the anchor securely set, the next step was to bring down the tender and then use the pulley to lift the 15 HP outboard engine into place. Once again, the boys took over and had it running in no time, with huge billows of blue smoke pouring from the engine because it had been sitting for so long. So they took it for a quick spin to get it running smoothly. 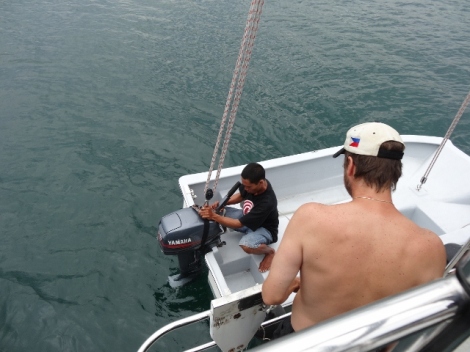 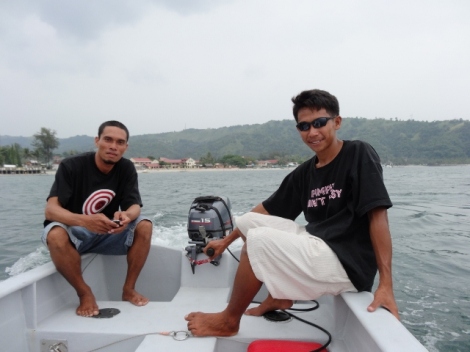 We locked up the boat and then all climbed on board. The new plan? Lunch at Sheavens Resort, where we could see the boat while we ate…just in case the anchor dragged or someone tried to board it. Blue Rock is around the point and out of view.

At the beach there was no direct access to the resort, so we had to make our way over a pile of rubble next door and enter from the road. This is where we stayed one year ago, when we first came to Subic Bay to see BELLE and take her for sea trials. Our waitress then was Grace. And, amazingly, she remembered us today. Chris reminded her that we said next time we’d come back on our boat. And here we were! 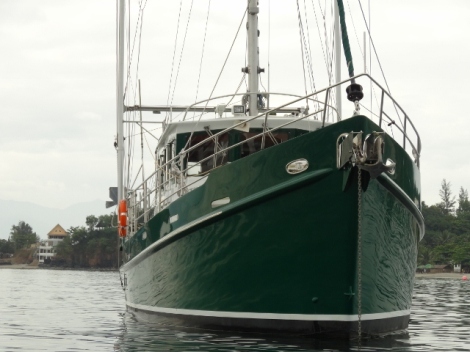 After lunch, back to MOKEN and then we all jumped into the water for a swim. It was refreshing! And very salty. Then lift the engine and dinghy back into place and cruise back to the marina. Here the alternator decided to produce too many volts, causing yet more concern. I guess that will be tomorrow’s project. (Update: We fixed the alternator by replacing the regulator. Glad there was a spare on board! Any volunteers to bring us a new spare?)

Coming into the harbour, the wind was pretty strong, but fortunately in the marina it was barely noticeable. Chris’ first attempt at docking was a success. And a relief. Now that calls for a celebration! Kitty celebrated the return to the dock with a nap. 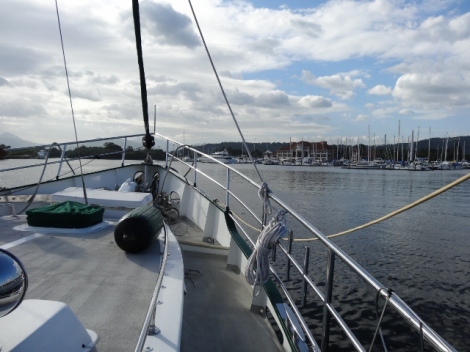