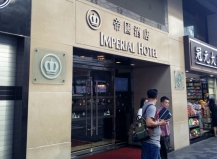 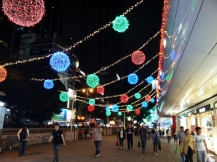 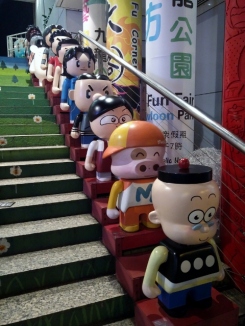 December 3-6, 2018: By the beginning of December, we’d been back in Sabah for nearly three months. That meant it was nearing time for a visa run. We’d have to fly out of Malaysia for a few days so we could get another 90-day tourist visa on our return. One of the nice things about Kota Kinabalu is how many direct flights there are to neighbouring countries. Where to go? Actually, it wasn’t a hard decision. Hong Kong won easily. We could collect a few boat parts and gorge ourselves on great food.

About a month before our trip, we contacted Seahorse Marine to arrange for a few spares for MOKEN; things like gas struts for the hatch covers and the chest freezer lid, and locking mechanisms for the exterior doors. I sent photos and measurements and the yard arranged for us to collect the parts from an American couple who are having a Diesel Duck built and who would be staying in Kowloon the same time as us. They would bring the parts for us, so we wouldn’t have to spend a day travelling back and forth to the yard.

We also made plans to catch up with other Seahorse boat owning friends that live in Hong Kong. It would be a whirlwind few days for sure.

Our trip didn’t start on the best foot. As we were checking in at the airport in KK before dawn for our early departure, we suddenly found ourselves surrounded by a large group of travellers that tried to scoot passed us in line. We held our ground. Best don’t mess with us before we’ve had our morning caffeine.

With only carry-on, we were out the other end quickly, hit the ATM and decided to take the bus to Kowloon rather than ride the airport train, just for a different experience. We hadn’t booked a hotel in advance. We decided to just show up at Tsim Sha Tsui (TST) and see what turned up. In hindsight, that might not have been such a good idea. Everywhere else was surprisingly busy and outrageously expensive. We scoped out several hotels in the area before finally settling on the Imperial Hotel. All around us, the streets were jammed with shoppers and tourists.

The concierge at the hotel directed us to a nearby dim sum restaurant for lunch. Afterwards we hopped another bus up to Mongkok with our boat parts shopping list in tow. We didn’t have any luck tracking down the miscellaneous bits of hardware we were looking for, but we did manage to score new sink stoppers for the basins in the heads. And we walked miles. By then it was definitely time for a beer stop. Luckily we stumbled on the Kowloon Taproom, a small pub specializing in local Hong Kong craft brews not far from our hotel. 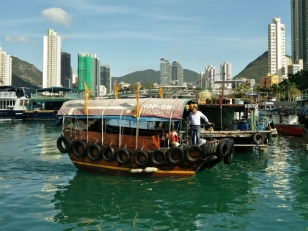 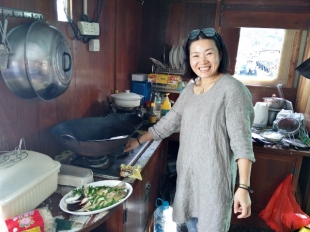 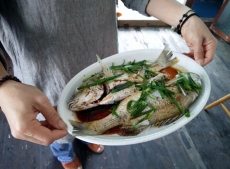 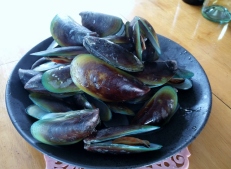 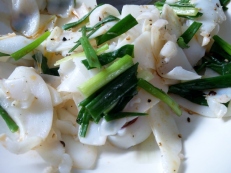 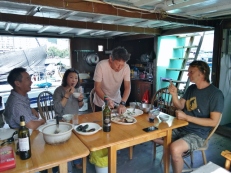 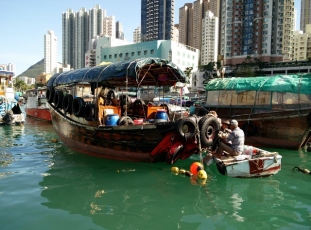 The following morning, we met up with Tom just outside the Lei Tung Station in Aberdeen. Tom is a fellow Diesel Duck owner. He gave us a quick tour of the local hole in the wall boat chandleries along Ap Lei Chau Main Street before stopping to buy some lunch fixings at the market. Then we hopped on a sampan taxi for the two minute ride to where he keeps his boat in the Aberdeen Typhoon Shelter. There are hundreds (maybe thousands) of boats of every description moored here. Fishing boats, speedboats, junks, sampans, sailboats, houseboats and more.

We had a quick tour of Tom’s boat, the larger Diesel Duck 542 and then settled in on David and Angel’s houseboat where we drank wine, talked boats and had an excellent seafood lunch, which Angel kindly prepared for us.

Back on shore, we returned to the chandleries. As Chris read from his list in one shop, the owner miraculously pulled items from his seemingly jumbled shelves of stock that were incomprehensible to the likes of us. Finally he commandeered the list from Chris and we left with quite a few items on it, from a spare engine room blower fan and a hydraulic seal kit to a carbon water filter, a replacement bilge pump for our yachtee neighbours at the marina in KK, and more. Just down the street we picked up a couple of large black shade cloths to use when we’re working on deck or whenever we need a little extra protection from the hot tropical sun.

That evening we met up with Jeannie, who regularly crews on a Diesel Duck 382 which was, at the time, berthed near MOKEN in Sutera Harbour, and she took us for dinner to a modern-style Chinese eatery located inside a new mall in Kowloon. They specialized in roast duck and had some very imaginative ways to serve it. We had duck three ways. There was crispy skin, moist roast duck, and a ground duck that we could stuff into little pockets, kind of like mini pita pockets. After eating, we all went for a long walk along Nathan Road to help digest.

The next morning we took a Star Ferry over to Hong Kong Island and wandered over to the Wan Chai district, where we had stayed the last time we were here. After passing a few eateries, we finally ducked into a noodle shop for a big bowl of breakfast soup. Then it was time to head out to Hebe Haven Yacht Club to meet Anders, yet another Seahorse boat owner. 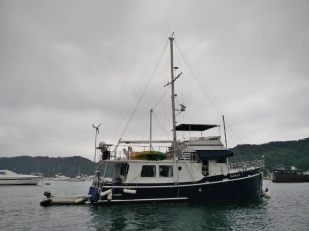 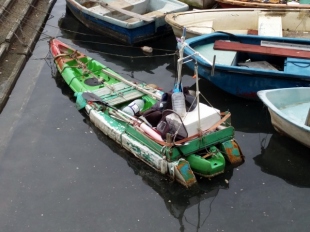 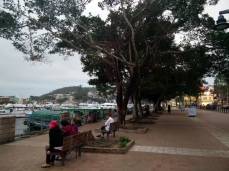 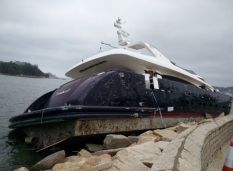 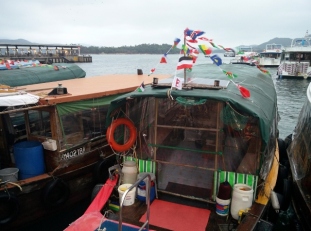 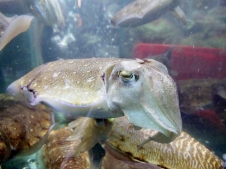 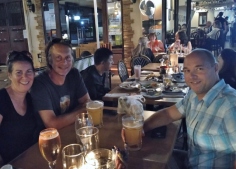 Hebe Haven took a direct hit from Typhoon Mangkhut back in September and a lot of boats at the marina and on the nearby moorings were damaged or written off. As we rode the service boat out to where Anders’ boat was moored, we could see the lingering damage to several yachts that hadn’t bothered to remove their sails and canvas ahead of the storm. The typhoon helped out with that. We spotted torn canvas, damaged rigging and broken masts. Out at Anders’ boat, we got to talking boats over coffee. This does seem to be a common theme among boat owners.

We were all a bit hungry by this time, so the three of us hopped the bus to Sai Kung town, a little further along the coast. We checked out a couple more marine shops, picked up a few bits here and there, and then stopped at a waterfront wine and cheese shop overlooking the inner harbour. I thought there had been a lot of boats moored in Aberdeen and Hebe Haven, but this harbour was like a giant boat parking lot. Row upon row of boats all lined up. It’s a popular jumping off point to head to the outer islands which are all part of Sai Kung East Country Park.

At one time, Sai Kung was a fishing village. These days it’s a popular weekend getaway from Hong Kong. There are lots of trendy shops, seafood restaurants, pubs and a long waterfront walkway. Lucky for us, it was mid week, so it wasn’t too busy and it was a nice break from the crowds of Kowloon.

After strolling along the waterfront and an assortment of touristy restaurants with their endless tanks of live fish and seafood, we continued to the point to see a luxury yacht that had washed ashore during the typhoon and was looted afterwards. By now it seemed like the right time to hit a small pub facing the town square for a couple of beers. This part of town had a more European flair to it, just a block or two away from all those seafood restaurants, by now filled with busloads of Chinese tourists. We opted for sushi instead. As our evening progressed into a late night out, the thought of catching the bus to the metro to get back to Kowloon became more and more daunting, so we hailed a taxi instead.

On our final morning, while Chris slept in, I wandered off to meet up with John and Dorothy to pick up our boat parts from the Seahorse factory. This, of course, led to yet more talking about boats over coffee. 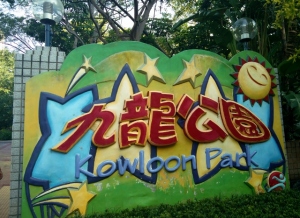 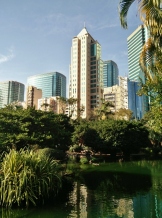 We now had the rest of the day to kill before our evening flight back to KK. We’d done our boat shopping. We didn’t have much energy after all our walking of previous days. We weren’t particularly motivated to go sightseeing and we were starting to feel a bit overwhelmed by the crowds and all the emphasis on shopping. Instead, we stopped for dumplings at Din Tai Fung and then hung out in Kowloon Park for much of the afternoon, a definite oasis in the madness that is Kowloon.

Finally it was time to bus back to the airport, check in our bag full of boat parts and wait for our flight. It felt good to be heading back to MOKEN and Nukaat and the much more manageable size of Kota Kinabalu. And we were definitely ready to start cruising again. What could stop us now?