November 11-13, 2018: After our special early morning encounter with Wilma the Orangutan, we decided to skip a side trip into Sandakan and instead made our way through 100 kilometres of palm oil plantations to reach the tiny town of Bilit.

Bilit doesn’t have too much to offer, but it does have a school, a mosque and one or two small shops selling a few items. We also spotted a couple of swiftlet houses. These are buildings designed to attract cave swiftlets to move in and build their nests. The bird nests are then collected for sale for things like bird nest soup. The primary method used to attract the birds is a loud recording of swiftlet bird song. It makes quite a racket. I’m sure the neighbours are impressed.

The big draw here is not Bilit itself, but the river on whose bank it sits. The Kinabatangan River is why we came.

The Kinabatangan is the fifth longest river system on Borneo, running 560 kilometres from its headwaters in the mountains of southwest Sabah (notably the Maliau Basin) to where it empties into the Sulu Sea.

On the plus side, the river banks are home to a very high concentration of wildlife. On the down side, the animals have been corralled into narrow strips of forest along either bank of the river. Just beyond this natural greenery are the palm oil plantations. It makes for great wildlife viewing, but probably isn’t good for the long term survival of the wildlife as their natural habitat is so curtailed and fragmented. 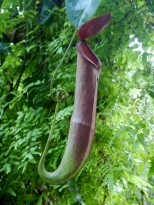 In Bilit, we were booked to stay at the Last Frontier Boutique Hotel. It sits high on a ridge above the town and the only way to get to it is to climb nearly 600 wooden steps up through the jungle. We made it just in time for lunch, a tasty volcano of nasi lemak, Malaysia’s national dish.

Our host, Gert, showed us to our room, one of only four. The room wasn’t luxurious but it was clean, spacious and comfortable and we had our own private bath and ceiling fan. Everything has to be hauled up the steps so it’s understandable why superfluous creature comforts are not high on the priority list. Only one other room was occupied, by Nicolo, an Italian who was volunteering at the lodge.

We had booked in for a two night package that included all meals and two afternoon river cruises. The best times for wildlife spotting are late afternoon, just before dusk and early morning, just after dawn. That’s when the animals come down to the river to drink and the monkeys set up their nests in the trees.

We had the afternoon to relax before our guide, Rodel, took us down to the river. The walk only takes about 15 minutes to get to the river, but substantially longer to get back up the steps to the lodge. It’s a very good thing there was an ample supply of cold beer awaiting us after each of these climbs. 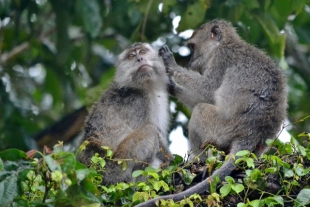 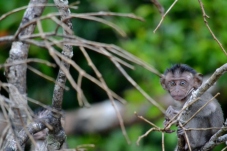 For our first cruise, we headed downriver towards a small tributary. Along the way we spotted a few groups of monkeys and some egrets fishing along the banks, but the tributary was the highlight. We came across a group of long tailed macaques hanging out in the branches of a couple of fallen trees over the river. Here they looked a bit woebegone in the drizzle as they groomed, fished and frolicked. They had to be on their toes, as there was also a crocodile nearby. A little further in, we spotted a spectacular kingfisher and a pair of hornbills. All too soon dusk set in and it was time to return to Bilit. We climbed the steps to the lodge in the dark and made a beeline for frosty beverages and dinner.

There’s no TV but the evening are not without entertainment, mostly of the bug variety. A wide assortment of big bugs flew into the dining area attracted by the lights. Some were quite fascinating. I have to admit that sleeping in the jungle is not as restful or quiet as I was expecting. It’s amazing how much noise bugs make at night. 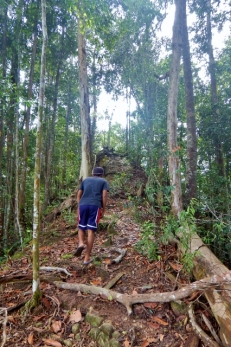 After breakfast the next morning, Rodel and Nicolo took us for a jungle trek along the ridge from the lodge. We spotted a fresh orangutan nest up in a tree from the previous night but no sign of its builder. In places the ridge was almost like a spine and dropped off sharply on each side. Far below us on one side was the Kinabantangan delta. Far below on the other side, a sprawling palm oil plantation. Leeches were underfoot. 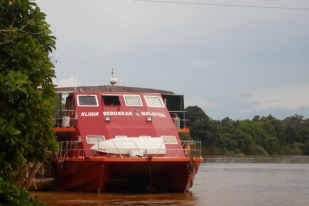 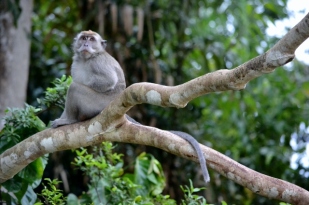 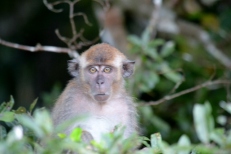 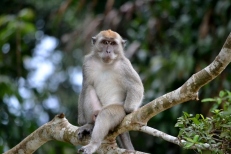 Back to the lodge for lunch and a free afternoon and then it was time again to return to the river for our second cruise. That afternoon, a young German couple arrived and joined us on the boat. Now we were five plus Rodel. This time we headed upstream along the main river. We passed and were passed numerous times by the river clinic boat, heading to other villages further upstream.

There weren’t any small tributaries off to the sides along this stretch. The scenery was constantly changing as we wound around the different bends. Every now and again we’d come across tracks and overnight camps from the resident group of pygmy elephants, but they were nowhere to be seen. We did, however, spot plenty of monkeys including langurs, macaques and proboscis, a couple of crocodiles and more birds, including plenty of swiftlets hunting insects at dusk.

In 2006, the government gazetted the Kinabatangan Wildlife Sanctuary to protect what little forest remains along the river. It was interesting to learn that even this is second growth forest, as timber harvesting and farming have been prominent in this area since the late 1800s.

Rodel learned from another guide that the pygmy elephants had been spotted a bit further up river. We had the option of adding a third cruise to our itinerary. It would mean an early start to get on the river by dawn. Were we interested in trying to find some pygmy elephants? You bet! 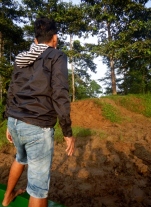 On our last morning, we were up at 0500 and ready to go, down the stairs in the dark and on the boat by first light. We headed up river again. The air was cool and still and the sun rose orange over the trees. We didn’t stop for monkeys this time. We beelined straight to the area where the ellies had been spotted the previous afternoon. We found their tracks. We saw where they had swum across the river. We saw the muddy bank where they climbed out a little before we got there. We could hear them in the jungle beyond. We could smell them too for that matter. But they were nowhere to be seen. So close.

We were a bit disappointed as we made our way back for one final climb up the steps to the lodge, but all in all our experiences on the river more than lived up to our expectations and our stay at the lodge was memorable. After a late breakfast, we packed our gear, headed down the steps one final time to our car and resumed our loop of Sabah.

Next up we head to Tawau Hills Park, the home of tall tropical trees.