Step 1: Finding MOKEN’s Look
Back in 2012, when we purchased MOKEN and were still living on Vancouver Island, we asked Colin at Sign Wave Designs to create the lettering that would be placed on the stern to identify our boat by name and home port. We didn’t want just any old font. It had to fit MOKEN, which is named for a tribe of sea gypsies from the waters between Burma and Thailand, so we wanted something with an Asian flair to it. (You can read how we came up with MOKEN’s name here.) Colin gave us six options to choose from.

Step 2: MOKEN’s Font
This stylized font was the clear winner. 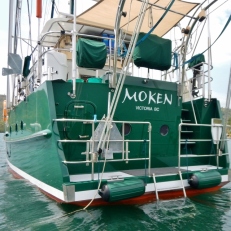 Step 3: Renaming MOKEN
Despite our original plan to do so, we didn’t go through the whole ritual recommended by superstitious sailors for renaming a boat. After we arrived in Subic, Chris simply put the name and our home port on the stern, and MOKEN was official. Of course, this had to come off again when we decided to repaint the green hull last year, so he got to reapply it again after we were back in the water. Lucky for us, Colin still had the graphics on file so we were able to pick up a new set (and a spare) last summer on our trip home to Canada.

Step 4: MOKEN Boat Cards
In the early days, I made up some basic boat cards in Word and printed them on an ink jet printer. This is not ideal in a marine environment as the ink tends to smudge or fade over time. Luckily, there were dozens of small graphic design and print shops in Olongapo, so after our second cruising season on MOKEN, I asked one of them to make us some boat cards featuring a photo from one of our early cruising adventures and leaving the space blank for a local phone number. The print size for the contact information ended up way too small for all but the best eyes and I’d prefer if the name on the front was in the correct font, but these work for now. Besides, we have a big stock of them to use up before I can even think to have them redone.

Step 5: Inspiration for MOKEN’s Logo
While Chris was recently working in Thailand, I decided we needed a boat logo that we could use on a wide range of things that was more than just our name. For inspiration, I walked down the marina and took a profile photo of MOKEN. This would be the basis for a logo.

Step 6: MOKEN’s Logo
I originally wanted to do a line drawing of our Diesel Duck, similar to ones I’d seen of other boat models. But I don’t have the right software or skills for this. So, a hand drawn profile of MOKEN would have to do. I don’t claim to be much of an artist so I tried to keep it as simple as possible. It took a few tries before I got something I liked and then I spent several hours cleaning it up in the Windows Paint app. 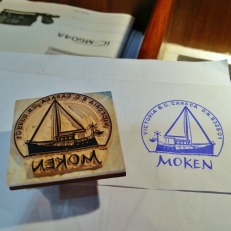 Step 7: Getting a Boat Stamp
I’d read about other cruisers having an official boat stamp which seemed to make life easier when dealing with certain formalities in different countries. It wasn’t a high priority, but it seemed like a good idea, so I took an enlarged version of my drawing, along with our official registration number and port of registry into Olongapo on the hunt for a stamp maker. I tried several shops that I thought might help, but nobody made stamps. Finally, a t-shirt shop directed me to a shop across from the big market. Try as I might, I couldn’t locate it. Asking around, I was finally pointed toward a tiny road-side kiosk that advertised Rubber Stamps and Keys Cut. The proprietor, Dan, showed me some hand cut samples and I handed over my drawing and a small deposit, not quite knowing what to expect.

Step 8: MOKEN’s Boat Stamp
Dan called the next morning to say the stamp was ready. I was certainly impressed with the final result. All the work is done by hand and the tiny lettering is exceedingly clear. Wow!

Step 9: MOKEN Apparel
As I hunted for a stamp maker, I was also getting quotes from a couple of shops in Olongapo that made t-shirts and uniforms. After dithering on style and colours, I ended up ordering t-shirts in three colours (black, grey and olive green), sleeveless shirts (black), driwear polo shirts (black and white), baseball caps and stickers. Our timeline was tight, but they worked with my schedule, and I picked up three big bags from the shop the morning of our departure from Subic. These will make great gifts along the way. We’ll be leaving a MOKEN trail wherever we go. I’d also like to get neoprene drink cozies made some day.

Step 10: Our T-shirt Models
Oliver, Al and Carl Benson came with us on the day we were leaving Subic to help us at the fuel dock, and so they got to be the first to model our new MOKEN t-shirts.

Step 11: Updating MOKEN’s Website/Blog
MOKEN’s website/blog has been around since 2012, but it doesn’t really match our brand. At least not yet. That’s on my to do list, once I figure out how to make it work in WordPress.