October 31 – December 31, 2017: Since arriving back in Subic Bay after our trip home to Canada, we’ve been pushing ourselves to finish a long list of projects to get MOKEN ready for the upcoming cruising season. I’ll save all that juicy stuff for another post, but we thought you might like to see what we’ve been up to on the rare occasions when we’re not working.

We’ve already mentioned the big ticket items. These were the tour of Corregidor Island and our hike up to Mount Pinatubo. Here’s the best of the rest. 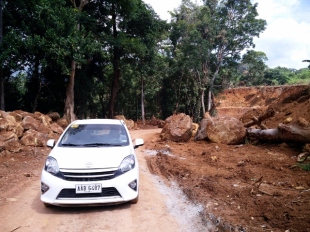 One and a half years ago, the road from Bajac Bajac to Mariveles was not passable in some sections except by motorbike. But one day, friends told us they had done the trip by car. That Sunday, we hopped in our rental Wigo determined to see for ourselves. The new road was wide and devoid of vehicles as it meandered south along the west coast of the Bataan Peninsula, overlooking the South China Sea, passing numerous resorts and long stretches of white beach far below. There was just one section, roughly six kilometres long, where the road was under construction but it was still passable. After a lunch in Mariveles that included our favourite grilled scallops, we decided to go have a close up look at Mount San Miguel at the point.

This was supposed to be a quick photo op. Then a group of young boys took it upon themselves to be our guides and traipsed along with us as we walked down the path to the beach for views from every angle. We could have climbed to the top, but we weren’t sporting appropriate footwear. Chris’ oft repaired flip flops needed yet another emergency repair before our walk was out. As we passed a beach hut, a group of off-duty security guards invited us to join in their friend’s birthday celebration. How could we refuse? 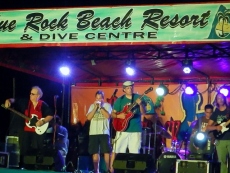 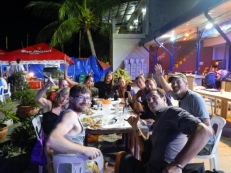 Blue Rock Resort puts on a Blues Festival each year in October. It was a night of good music and good food, but it was hard to have any sort of conversation over the music with Peter and Betty, Brian and Donna, and friends.

Catching Up with Friends

Rich was in town getting some work done on his boat, Bewitched, so we hung out. Danny and Yvonne were preparing their boat, Thin Wolf, for their cruising season, so we hung out. And we finally met up with Vinny and Jenny over a four hour lunch in San Fernando. Chris and Vinny worked together 15 years ago in Equatorial Guinea. Small world.

It seems there is always a party going on somewhere, especially during the Christmas season. There are Sunday potlucks at Betty and Peter’s beach. There was our annual Christmas Dock Party for our dock neighbours, tradespersons and friends. We helped Alice celebrate a big birthday milestone. And there was a sumptuous Christmas feast spent with our Subic family at Les and Kerry’s. 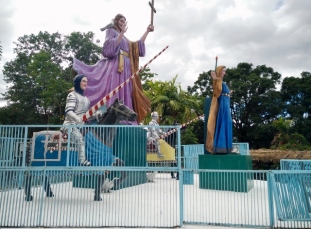 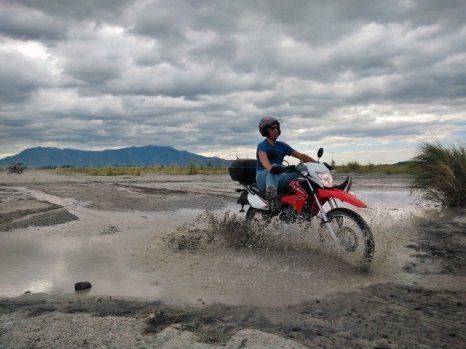 Chris headed south and worked on a helicopter for a few days in November. With that bit of business out of the way, he borrowed a Honda 150 and squeezed in a couple of off-road rides with Heath, during his visit around Christmas.

One day they went northwest to San Marcellino and then up into the hills to Lake Mapanuepe that was created when Mount Pinatubo erupted, flooding the small village of Aglao. In the middle of the lake, the cross from the sunken Church of Bajaoen indicates where the town once stood. The new town was built on the shore of the lake. Beyond the lake, stands the old Dizon copper mine.

A few days later, Chris and Heath headed south towards Mariveles, retracing our previous route along the new road and heading off to explore some of the long white beaches and jungle roads.

Some Monday afternoons, Betty is able to convince Sandra to eschew the cleaning and errands and go to the hash. Some Mondays she can’t. Sandra also participates in a monthly book club. Recent titles have included Hidden Figures by Margot Lee Shetterly, Do Not Say We Have Nothing by Canadian author, Madeline Thien, The Radium Girls by Kate Moore, and Cat’s Cradle by Kurt Vonnegut. 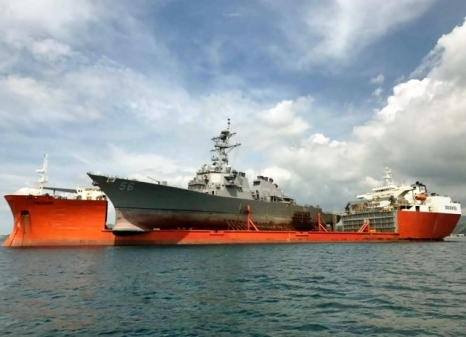 It’s not unusual to spot unusual things around here. Take the gruesome diorama we came upon on Hallowe’en along the waterfront drive for example. On another day, we drove out to get a peek at the USS John S. McCain, a navy destroyer that had collided with a merchant ship off the coast of Singapore back in August. It was loaded sideways onto the deck of another vessel for transport to Japan for repairs, but was rerouted to Subic Bay for a few days after a big crack developed in the hull.

We rang in the new year with our Subic family. Tracy and Pascal hosted a New Year’s party on their deck up in the hills of Cubi, above the Subic airport. With 180 degree views over most of Subic Bay, we were able to watch numerous fireworks displays all around the bay as each community vied to outdo its neighbours.

Now that we have six New Year’s Eve celebrations under our belt in the Philippines, don’t you think it’s about time we moved on to explore a bit more of this great big blue planet?

With additional photos by Danny, Heath and Tracy.