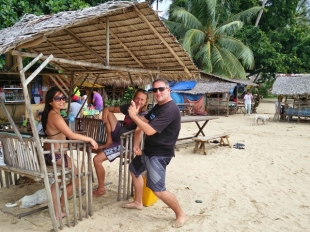 June 8-17, 2017: All work and no play make Chris and Sandra a little batty, so after the big reveal of MOKEN’s new paint job, we decided to celebrate with a quick trip to Puerto Princesa to visit our friend Rich for a well deserved break and our long anticipated dive trip to Tubbataha Reef.

Philippine Airlines had just started regular scheduled flights between Clark Airport and Puerto Princesa earlier this year, so getting there was a snap. The trip was uneventful except for a delay with no indication from the ground staff as to how long we’d be stuck waiting at the departure gate. Eventually our plane arrived and they herded all of us onto busses for the short hop across the tarmac to our plane.

The delay put us a couple of hours behind schedule and they didn’t have any busses at the other end to whisk us to the arrivals area of the brand new, but already too small international airport, but they did offer large sun umbrellas to use for part of our stroll. Our friend, Rich, was circling the arrivals area by car waiting to collect us and our dive gear.

We dropped our gear at our hotel, the lovely Hibiscus Garden Inn, popped in to the HNZ hangar at the airport to see where Rich works and then made a beeline to Artisan’s bistro for a late lunch. The next couple of days were a whirlwind as Rich toured us around some of his favourite beaches, restaurants, night spots and other places of interest, creeping along in the horrendous bottlenecks of traffic, and introduced us to many of his friends. There was BBQ night with the crew from HZN, hanging with Olesya, Stefan and his PBA (personal beer assistant) Angelo at Captain Ribs, and Dino and Let from Sakura Dive Charters, tastings at the Palaweno craft brewery where we also caught up with our Canadian dive buddy Wendy, scouting out the Abanico Yacht Club, spending a lazy afternoon at Nagtabon Beach with Rich and his couchsurfer, Eileen from Australia, and stumbling upon the Palawan Baragatan Festival, celebrating the province’s 115th anniversary.

Puerto Princesa is best known for the Underground River tour, and much as we hate crowds and anything organized, we decided we shouldn’t give this one a miss. We probably could have tried to do this on our own, while Rich was at work on Friday, but it was much easier to join a group. We lucked out and ended up in a small van with just five others aside from our driver and guide. There were four Filipina sisters and a young woman from the Netherlands. 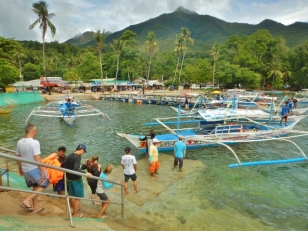 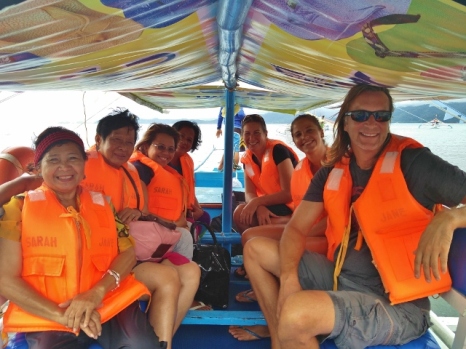 It was a long, winding drive about 80 kilometres out of town to Sabang Beach on the west coast of Palawan, where we waited in our group to be assigned a small banca for the short ride up the bay to the Puerto Princesa Subterranean River National Park. Once landed on the beach inside the park, we received an audio headset and a bright orange hard hat to match our bright orange life jacket we were required to bring with us from the banca. We joined the groups from other bancas and walked along the jungle boardwalks to the next staging point, where we waited again, this time for our group number to be called. Here they loaded us all into small outrigger canoes and a boatman paddled us into the caves.

There is quite an extensive underground cave system stretching more than eight kilometres into the limestone cliffs. Only a small portion of it is open to the public and much of it has yet to be explored. The karst and cave formations, large chambers and high domes are incredible and it was refreshingly cool inside but not condusive for taking photographs as flash photography was forbidden. So was talking.

At times, it felt a bit like being on the “It’s a Small World” ride at Disneyland and it was somewhat comical, somewhat frustrating that our audio headsets were not synced to what we were seeing, sometimes off by several minutes. Otherwise, the whole experience was well organized, the staff were friendly and the park was clean. Not an easy feat when they have up to 1,000 visitors and more through each day. Don’t go on a weekend!

The park has been a UNESCO World Heritage Site since 1999 and was named one of the New7Wonders of Nature in 2011.

Following the tour, we took the banca back to Sabang Beach and joined the throngs from all the other groups for an all-inclusive buffet lunch. For just a little bit extra, were we willing to try the local delicacy, tamilok? Of course! It turned out to be long, tubelike, raw, slimey, salty shipworms harvested from the surrounding mangroves. They kind of reminded us of raw oysters. Surprisingly, not bad at all.

Next up we join a liveaboard trip to Tubbataha Reef. Stay tuned.