February 1-28, 2017: We spent the month of February in and around northern Palawan, exploring Bacuit Bay and Malampayan Sound, before heading back up to Busuanga Island.

After provisioning at the market in El Nido, we upped anchor and set off to find a quieter anchorage.

First up, we checked out a few possible anchorages around Miniloc Island, but here we found the waters dropped off too steeply for us to feel comfortable spending the night. We stopped in a small bay for lunch and a dive at the point. The reef wasn’t too exciting, so we opted to clean the hull on MOKEN instead. After learning from the staff at the private beach nearby that overnight anchoring wasn’t allowed, we headed over to Malpacao Island across the bay. This small, tropical island has the added bonus of huge numbers of bats flying overhead at dusk. We relaxed here for a couple of days spent kayaking, snorkelling, reading and hanging out on the beach.

We popped back to Corong Corong for a few more supplies and fresh water and then decided to check out Snake Island. Just before we left in the morning, we ogled as a school of wee fishies swam endless laps around MOKEN. The water was so clear that we could also see larger and larger ones deeper down. It doesn’t take long for MOKEN to become a fish magnet. 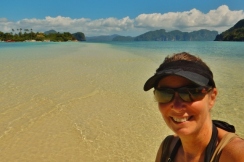 Finding a spot to anchor at Snake Island took a bit of time. The reef seemed really close on all sides as we entered the bay. Eventually we picked our spot and dropped the anchor, popped the kayaks into the water and set off to explore the area. It’s a geographically interesting spot. A long sand spit, only exposed at the lowest tides that meanders from the mainland to a tiny island at the far end. It’s a popular spot with campers and day trippers, and there’s a small kiosk selling snacks and cold drinks. We walked the spit with the water never reaching much above our knees.

The following day we decided to head a bit further south, so we cruised out of Bacuit Bay, around the point and south along the coast until we reached the busy fishing village of Liminangcong. The channel between Tuluran Island and Palawan is narrow and winds around a couple points of land, making navigation into Malampaya Sound a bit tricky. Chris kept a close eye on our depth sounder and I kept a close eye out for shallow reefs as we made our way through Endeavour Straight. Our Navionics chart was really far off, but luckily the digitized paper charts in OpenCPN seemed much more accurate. The water depth was 24 feet at the shallowest point.

As the straight widened out, we came to Endeavour Point, our intended anchorage. Unfortunate for us, the wind was blowing into the small beautiful bay here, making for a risky anchorage, so we stopped for lunch but then decided to push on to find someplace a little more protected. This took us further in to Malampaya Sound to Turung Bay. This huge bay had depths around 40 feet for most of it. We anchored on the east side of tiny Cooke Island in about 38 feet of water. 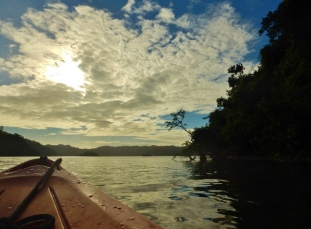 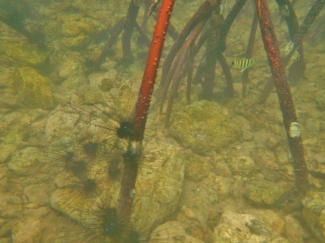 While there was no 3G signal here, we had the place pretty much to ourselves. We kayaked to the beach on Cooke Island, and got doused in a downpour, so we hid out in the mangroves. The rain didn’t let up for ages so it was a wet paddle back to the boat. At least MOKEN had a good rinse.

This was our home for the next few nights. Highlights included a visit from a local fishing family. The whole gang came out in their banca to say hello and sell us a few crabs. We also took the dinghy around the point into the next bay to a small village across from Alligator Island looking for a few supplies and a 3G signal to check the weather. We were out of luck on both counts, but we did find pigs in bamboo cages perched out over the water, tiny shrimp drying on racks in the sun and a few eggs at the sari sari store.

That evening we took our burnables to the beach for disposal. We were so caught up in getting the fire going that we didn’t see our dinghy float right by us. Chris had to swim for it. Luckily it didn’t get too far, but he did step on a spiny urchin getting to it, so we soaked his foot in vinegar once we got back on board.

That night I woke up dreaming that Nukaat was swimming around the boat. He was nowhere to be seen, so I had to get up and look for him. I found him curled up on the forward deck lockers, likely dreaming about land. He followed me in and spent the rest of the night with us.

The next day we started rationing our coffee and canned cat food, so it was time to go back to town. We had planned to head further south towards Port Barton, but without a current weather forecast, we decided to return to Liminangcong and check on the weather. We retraced our route up Endeavour Straight to town. It was Thursday and the forecast indicated winds picking up starting on Saturday, so we decided to hoof it for El Nido, get a few supplies and keep on for Halsey Harbour on Friday hoping to beat the weather.

Back at our anchorage in Corong Corong, Avril and Graham on Dreamaway (from Southhampton, UK) arrived just as we were getting into our dinghy to go to town. We’d first met them before Christmas in Subic Bay. We made arrangements to meet on shore for sundowners and dinner. We caught up over grilled seafood at a small beachfront restaurant down the way. After a good meal and good time with good company, we said our farewells, as they were planning to head south and we were going north again.

We were up at first light the next morning and underway soon after. It was a long, uncomfortable crossing to Halsey Harbour. Kitty was not happy. Me neither. Chris put out the paravanes ready to deploy the fish but it never got really rolly. We just had big swells from time to time. Our big fishing rod picked this day to detach itself from the rod holder and land on kitty. He was not impressed. We were all very relieved to reach our calm anchorage, after passing numerous fishing boats anchored just outside Halsey Harbour near Saddle Rock. It was an early night.

While we were in Corong Corong, Avril gave us a great a mobile phone tip, which I put to good use in Halsey Harbour. She suggested switching the phone to 2G in out of the way places. I was able to receive email over 2G. It wasn’t fast enough to check the weather though.

After coffee and a hot shower, we got underway at 0900. There were whitecaps in the harbour after we exited the North Arm, but the sea state as we headed up the coast of Culion Island was reasonably calm. We arrived back at the Puerto del Sol moorings in the early afternoon. 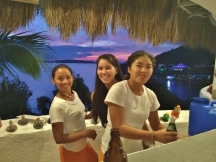 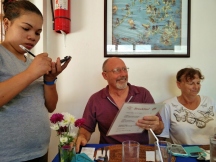 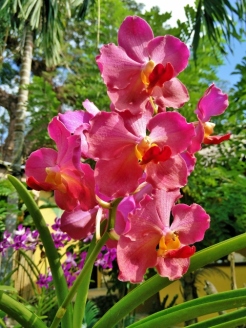 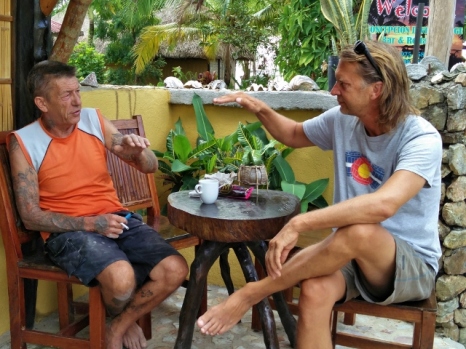 We spent the next week hanging out. We got in some pool time at Al Faro Resort but it wasn’t all play. I had to do some bookkeeping, and Chris changed our faulty exhaust fan.

A week after leaving El Nido, we upped anchor again. We had calm seas along the south coast of Busuanga Island until we entered Coron Passage. Then the winds picked up to 20 knots. There were whitecaps in the pass. As we exited Coron Passage and turned left to head north up the coast, we were hit with big steep swells with close intervals. It was very uncomfortable so we turned around. By the time we got back into the pass, the wind was dropping and the big waves crashing on the rocks were much reduced in size. We decided to go for it, so we turned around again. We had to hand steer to make our way up the coast. Swells on the beam were uncomfortable at times, but at least the wind was down to eight knots. Kitty was once again unimpressed. We were all happy when we finally rounded the northeast point and headed for Maricaiban and the moorings at El Rio Y Mar Resort. We arrived at sunset and the resort boat met us at the mooring with a welcome and information about prices. We tied up, ate dinner on board and were soon fast asleep. 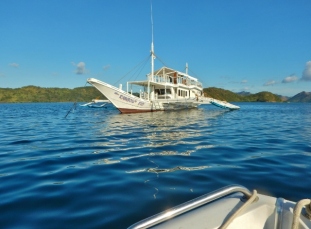 We spent the next five days here. We caught up on all the news about the area from Rolf and his wife Menshi and enjoyed the incredibly fast 3G service. It was some of the best we’ve had anywhere in the Philippines. We came here to dive the Kyokuzan Maru wreck but the winds picked up for the next couple of days and it was too rough to make the 3.5 nautical mile trip to the dive site in the dinghy. Finally, we got a calmer day. After Chris spent two hours cleaning the hull, we took the dinghy to the wreck in the late afternoon, winding our way through the pearl farms and shallow reefs.

It’s a beautiful wreck but it’s deep. We tied to the mooring buoy at the stern and dropped down to 100 feet. Most of the deck is at about 80 feet. We found the jeep in the second hold from the stern, then had to turn around as Chris was close to deco from his earlier dive that day. Our bottom time was 28 minutes. We would have liked to dive the boat again on Nitrox…maybe next time.

The following morning we got underway early. There was a small swell on the outside. Our tachometer and engine hours gauge weren’t working, and our rudder angle indicator was also on the fritz. Sheesh. The seas became more confused as we neared the pass between Caluit Island and Dimipac Island. The rest of the trip back to Puerto del Sol was better with winds averaging about five knots. 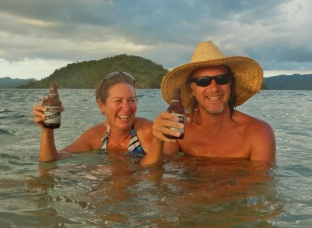 The last week of February was spent here on the moorings at Puerto del Sol. We did three wreck dives. Our friend Richard arrived from Puerto Princessa, and we all hung out with the crew from D’Divers and several of the other yachties.