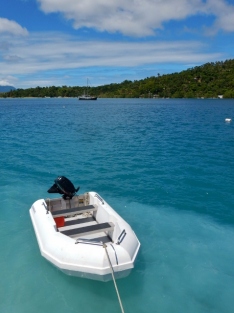 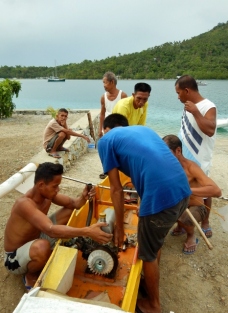 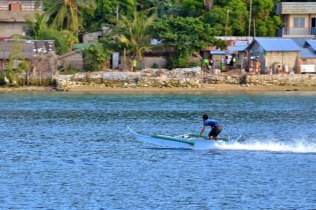 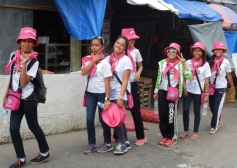 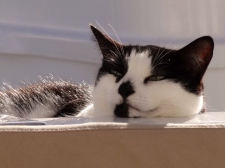 February 26-27, 2016: Similar to what we saw last year on our trip south to Palawan, today the banca drag racing boats were out practising on the water and tuning up their engines. There’s a big race coming up on the weekend on one of the neighbouring islands. As the local boats zipped around the bay, dozens of men watched from the yacht club. Those boats really are fast. When they are running, that is. That necessitates a lot of tinkering. And a lot of observation, supervision and suggestion from the eager crowd on shore.

In the afternoon we decided to check out one of the dive sites recommended yesterday by Patrick and Philippe at Duck Divers. We headed over to the sandspit at the southeast tip of Logbon Island in the dinghy. Another beautiful spot. 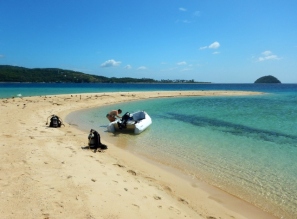 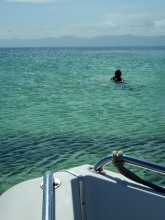 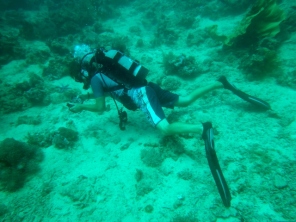 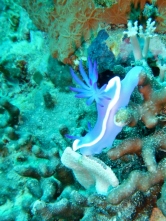 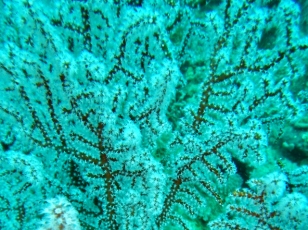 We suited up on the beach, trying but failing to keep the sand out of our gear, then swam out until we were just past the point. Here we descended and spent a great 40 minutes exploring the reef and taking an assortment of photos and videos. The water was clear, the hard and soft corals were abundant and healthy, we spotted fish in schools, fish in groups, fish in pairs, solo fish, the ever present clown fishes and non-fish things like nudibranchs, ghost shrimp and gorgonian corals. Overall, two thumbs up with the exception of the trash in the water in the shallower part of the bay, which included more disposable diapers than I care to recall.

On this dive, I took along our little Nikon Cybershot waterproof camera to see what it could do. No underwater housing and no diffuser for the flash…and I haven’t figured out the white balance setting yet. But not too bad for a point and shoot, although I did a lot of colour adjustment post dive and colours are still off. But you get the idea. I think I blinded the poor nudibranch trying to get him in focus. Here’s the video that Chris took:

Despite the trash, this bay would make a great anchorage in calm weather. Just not today.

Our good weather window did not last. Back on the surface, things had turned a bit nasty. The winds had picked up, rain squalls set in and the return crossing was unpleasantly rough and wet. Good thing we were already wet so that didn’t matter so much.

The next day was equally unpleasant, weather wise. It rained all day. February is supposed to be one of the three least rainy months in Romblon, along with March and April, but not this year. The weather in the Philippines has been more than just a little wacky lately. 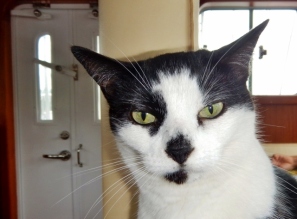 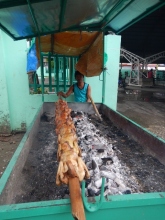 We spent most of the day trapped inside watching movies before finally braving the elements and going in to town. We had to stock up on provisions as we were planning to make an early start on Sunday morning, retracing our route to Marinduque and Puerto Galera, and eventually back to Subic. But before then, we spent one final evening at Romblon Deli to bid farewell to our new friends. And to pick up the frozen strawberry cheesecake they made for us, special order. Thanks for the great welcome…and the cheesecake.

See you again next time.