February 23-24, 2016: This morning we woke up in Romblon. Which Romblon you might ask? After all, Romblon is a province, an island and a town. Romblon town, located on Romblon island, is the capital of Romblon province. Romblon province is made up of three major islands and 17 smaller ones, and like Marinduque, also claims to be the geographic centre of the Philippines.

In case you might be getting the wrong idea about our adventures, I’m going to let you in on a little secret. Cruising isn’t all fun and games. Sometimes we work too. I had to do a little catching up with bookkeeping to meet a taxation deadline, while Chris dropped the dinghy into the water and scouted out the bay before announcing that we were moving to the blue mooring furthest from the burning piles of rubbish on shore. Fine with me.

With that order of business soon out of the way, it was time to go exploring. We took the dinghy to shore and tied it up at the Romblon Yacht Club. The gate was locked so we had to wind our way through the barrio next door, dodging the barking dogs we’d heard last night and peeking furtively into tiny shacks made from an assortment of nearly new and not so new recycled materials.

Once at the road, we hailed down a passing trike. From here, it’s a short 20 peso ride into the centre of Romblon town. The ride goes over the hill past the hospital that’s under reconstruction, down to the waterfront where an abandoned slaughterhouse sits next to a large open space piled high with garbage that apparently often blows into the bay during bad weather, and ends at the square across from the ferry dock that dominates the waterfront, where an endless row of trikes line up waiting for one of the many daily ferries to arrive.

Seen close up, Romblon has a much different feel from the one we had yesterday when viewing the waterfront from a distance through our binoculars. A little shabbier than the Mediterranean image I was anticipating, but still with lots of vibrant colour and activity. 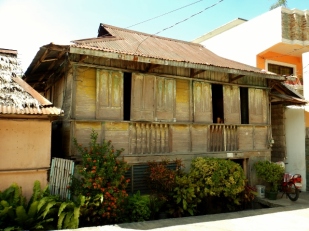 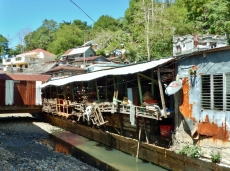 First we decided to wander around and get a sense of the place. We strode past the square and up the street next to the covered court and Saint Joseph’s Cathedral, built starting in 1640 and completed in 1726. At the end of the road, we reached the high wall to the grounds of the National High School and walked along the adjacent road before turning back towards the waterfront along a parallel street. At this point, we took a detour up the national road trying to find the marble carvers. After more than one kilometre uphill in the midday sun we hadn’t found them yet, so we backtracked and continued on our way back to the square, this time going past the market and bustling central business district.

All along the way, we were greeted by students heading to class after lunch break and we marvelled at the old-style wooden buildings we spotted everywhere. There was an old two-storey wooden school across from the Catholic church. Old houses with mother-of-pearl windows. Old houses that were leaning precariously at extreme angles. Old huts with thatched roofs and woven walls. Interspersing these were modern concrete buildings painted bright colours and tall, new multi-storey buildings under construction. It’s very definitely a place in transition, as older buildings are replaced with new. Kind of sad really. The older buildings have so much character. But then again, I don’t have to live in one of them…in a typhoon.

We stopped for lunch at Pineapple Hill cafe overlooking the pile driving at the waterfront and the old Spanish fort on the hill guarding the centre of town. Here we learned from the proprietor that a mother dolphin and baby had been seen hanging out in a small cove near the old slaughterhouse for the last week. It explained all the people, young and not so young, who had been hanging around the area hoping for a sighting when we went by on the trike. It was the talk of the town.

After getting directions on how to get to the fort, we crossed the small river and started the climb up a set of stone steps decorated along the way with mosaics depicting everything from the first meeting of the Spaniards and the local peoples in 1569, to the sea life and wildlife found in the region. We stopped to take a few pictures of Romblon harbour. The colours of the water are amazing, with dramatic contrast between the brilliant blue of the deep water and the greens of the shallow reefs. We really got a great sense of the navigational hazards in this area. And now I have this urge to get a painter’s colour wheel so I can describe all those different shades of blue and green in terms like cerulean blue and cobalt turquoise. Oh, I guess I just did.

When we reached Fort San Andres, we were dismayed to find it barricaded behind locked gates and a high chain link fence. Apparently the whole site is under restoration so we couldn’t check it out up close. The fort was built following a Dutch attack in 1646 which destroyed the capital. In later years, it also protected against frequent raids by Moro pirates.

Back down by the waterfront once again, we decided to head out to Anchor Bay Watersports to inquire about diving in the area. We soon hailed a trike which took us the three kilometres south of town past spectacular views of the bay and the islands across the way. On our arrival we learned that the owner was out of the country and around the same time I received an email from him telling me the same thing. It turns out he is also the commodore of the yacht club and I had emailed him previously to inquire about moorings. Despite his absence we got some good intel from his staff about the location of the nearest dive shop, another few kilometres further south.

Our trike driver, who had waited for us, took us all the way back to the yacht club. We’d spotted Bangug Island and Bonbon beach from the shore en route and wanted to go there in the dinghy and check it out. Apparently you can walk out to the island in ankle deep water at low tide. 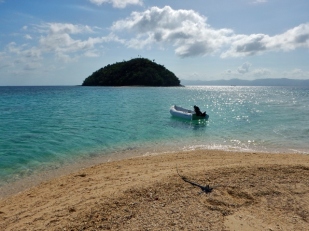 We loaded our cooler and snorkel gear and bounced our way across the bay, around the southern point and along the coast until we reached the tip of a long sandspit. This was Bonbon beach. It wasn’t quite the nice soft sand we had anticipated. Instead, there was a lot of coral and sharp broken bits of shell. But despite this challenge to tender toes, it was spectacular. The water colours just popped.

While I splashed about in the shallows on the inside of the spit, Chris decided to see how far he could get walking to the island across the shallow reef. I soon spotted him on the other side. Apparently the water never reached his knees.

Meanwhile, on the outer side of the spit, the lighter shallows quickly dropped off to the darkest depths. Along this edge a lone fisherman snorkeled from his banca looking for the catch of the day.

The sun was starting to dip in the sky. It had already been a long, busy day and it was getting about time to feed Nukaat lest he waste away to nothing. Ha! So we packed up the dinghy and opted for the scenic route around Logbon Island that sits directly across from the entrance to Romblon Harbour. The seas were a bit choppy as we made our way around the island and across the pass to MOKEN. I was exceedingly grateful that our new outboard was performing so well and our new dinghy was so sturdy. Safety first.

The next day was punctuated with more bookkeeping, a little restocking at the market and a return trip to town for dinner. While I crunched the numbers, Chris hauled 400 feet of chain out of our chain locker onto the deck. Later, I fed it back it back into the locker as Chris neatly coiled it below, something he likes to do every so often just for fun. (This actually helps to keep the chain from turning into a tall volcanic cone that blocks the rest from going in the locker and reduces chain avalanches from occurring.)

On our way to town, we met the yacht club’s representative, Leonardo, in person and promptly handed him a large bag containing six days worth of rubbish. We are definitely going to have to figure out how to produce less garbage when we’re cruising full time. Nards, as he’s affectionately called, also gave us the coveted code to the combination lock on the gate. No more traipsing through the neighbours’ yards.

On our return to the dinghy in the afternoon, we found it covered in little dirty footprints with an assortment of rocks scattered about inside. Obviously, the little boys we’d seen that morning on the shore when we tied up had found a new plaything. There are pirates everywhere.

Our friend Paul, from Puerta Galera, is a friend of Dave and Tess, the owners of Romblon Deli. We spend an amusing evening with them and their friends Bill and Sol from Boracay, learning about life on Romblon and listening to stories about Paul and Dave’s exploits while teaching English in Japan more than 20 years ago. You can just imagine.

In other news, the reports of the dolphin sightings were true. I spotted the mother as we returned to MOKEN by trike on our first afternoon and Chris spotted her the following day. Meanwhile, groups of local kids were out swimming in the cove on makeshift rafts made from large bags stuffed with empty plastic bottles. I guess inner tubes are a thing of the past.