February 11-18, 2016: We arrived in Puerto Galera on February 7th. Eleven days later we were still there. And we’d only planned to spend four or five days before we continued cruising. We’ve already spent more time in PG than anywhere else on our cruising adventures in the Philippines (aside from Subic Bay). What gives?

First it was the weather. Day after day of strong winds with no good weather window to entice us to head out from the bay. We weren’t going anywhere.

While we waited for our weather window, we discovered quite a lot of water in our fresh new gasoline that we’d purchased from the gas station across the street from the yacht club in Subic just before we left. We took two runs by trike to the Shell gas station to buy some higher octane fuel and donated our old fuel to a local fisherman and one of the yacht club’s boatmen. Apparently the regular unleaded contains high quantities of ethanol, which attracts moisture, not a good idea for high performance marine outboards. 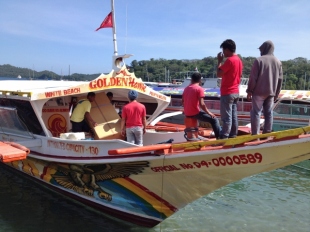 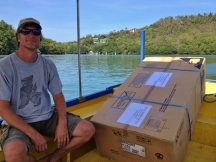 On top of fuel issues, we’ve been having no end of problems for the last couple of years every time we tried to use our Yamaha 15hp outboard. That was one of the reasons we ended up buying the smaller 5hp Mercury outboard last fall…partly to have as a spare in case the Yamaha was being cantankerous.

After Chris spent yet another day pulling the Yamaha apart, cleaning the carburetor multiple times, and putting it all back together again, where it still didn’t perform as it should, he decided he’d had enough. On February 11, we called Broadwater Marine in Subic and ordered a new 15hp Mercury outboard and asked them to send it to us in Puerta Galera, care of the yacht club.

The box arrived on Valentine’s Day, early Sunday morning aboard one of the bancas from Batangas. We quickly set about swapping over from the smaller 5hp engine and then had a lot of fun zipping around the bay and going around the peninsula to Sabang beach.

Finally, our weather window arrived. On February 17, we did our provisioning at the public market, a supermarket and a deli and got MOKEN ready to set off super early the next morning. In anticipation, we decided to adjust our location and up anchor so as not to be doing this in close quarters with SLOW DANCE at 0400. 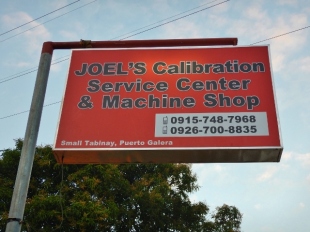 After bringing up about 100 feet of chain the windlass started giving trouble. It was working fine, but the chain guide/stripper broke. The chain kept balling up and wouldn’t feed into the chain locker below. That was totally unexpected and we didn’t have a spare on board. So Chris played out the chain again then hauled the last 100 feet up on deck so he could disconnect it and tie off our anchor line while we went in to town to find an emergency welding repair at 1700. A bit late for this kind of work, we thought we might be out of luck until the morning.

But the yacht club boatman organized a trike driver to take us to a welding shop a little ways out of town, after the first shop he tried was closed for the evening. Luckily for us, the guys were still hanging around and were happy to weld the guide back together. As far as temporary emergency repairs go, it works pretty good and we haven’t had to abort our trip, but we didn’t realize until later how much the guide had bent out of shape over its life span. I expect we’ll get a new one made (and a spare) once we get back to Subic.

Seeing as how it was now getting late, we decided to go to the yacht club for dinner before our early start the following morning. It was curry buffet night. I’m not sure if I ate way too much, if the three different kinds of curry had a fiesta in my belly, if the food was off or if I just had a nasty case of the stomach flu, but I was up sick all night and too weak at 0500 to be going anywhere.

We spent a beautifully calm day at anchor…the perfect weather window for cruising…while I slept and drank water and Gatorade and Chris looked for more boat projects to keep him busy. By that evening I was feeling much better, although still not eating much. A very unusual condition for me at any time.

At last the stars aligned for us and we were ready to go the following morning. First stop, Marinduque Island.