December 2015: I’m sure I’ve mentioned this on the blog before. Filipinos love Christmas. Decorations and Christmas songs make an appearance in September and carry on through all the “ber” months. What I wasn’t expecting, is how much “Christmas” influence we found in Azerbaijan, a Muslim country. 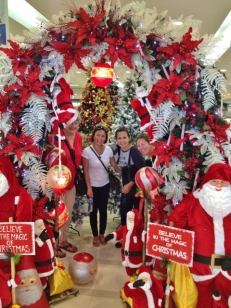 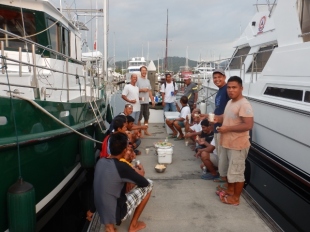 Before we left for Azerbaijan in the middle of December, we held a Christmas dock party and invited all our neighbours…the crews off all the boats around us. These are the guys that help me out when Chris is away at work and lend Chris a spare pair of hands or extra muscle when he is working on different projects on MOKEN.

The staff at the yacht club all participated in a contest to design and make the best Christmas tree using only recycled materials. All five teams were so proud of their efforts on the day the trees were mounted along the road in front of the club, as well they should be. The trees looked great, especially lit up at night. The one made out of five-gallon pails took home the prize. 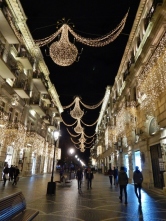 As Azerbaijan is a Muslim country, I didn’t expect there to be much in the way of Christmas spirit. But in reality, many of the commercial trappings of Christmas have found their way in. There are decorated trees in many public spaces, Santas, winter snow princesses, snowmen, shops selling Christmas lights and decorations, a large Christmas market in Fountain Square and, oddly enough, giant pink Barney characters. I’m not quite sure how they fit in to the festivities, but you can have you picture taken with Barney or a snow princess in front of one of many Christmas trees scattered around the downtown area.

Christmas isn’t a recognized holiday and it’s business as usual. Chris had to work on Christmas day but he was home early. I’d been planning a roast chicken complete with all the trimmings for our dinner, but in the end we opted for dinner out with some of the people he works with at a great Georgian restaurant just around the corner. Our Christmas dinner included khachapuri, khinghali and giant grilled pork ribs topped off with Georgian wine.

That doesn’t mean we missed out on a traditional Christmas turkey dinner altogether. The company organized a Christmas party the following night at a local restaurant for all the staff, foreign and local. There was turkey, dressing and gravy (made by the Marriott hotel) on top of a full Azeri feast (which entailed lots of grilled meats). So much great food. And the desserts. Oh my! My favourite was the Caramel topped shortbread. I couldn’t resist, again and again and again.

I wonder where we will spend Christmas in 2016.

(A very belated) Merry Christmas, every one!