November 29 and December 6, 2015: All work and no play make Sandra and Chris a little cranky at times. So we made a point during all the boat work this past couple of months to take our cute little Wigo rental car out for a couple of exploratory Sunday drives.

(Renting a car makes a lot of sense when we’re making so many trips to the chandler, stainless fabricator’s shop and countless hardware stores looking for bits and bobs during the boat projects. Plus it gives us the added bonus of exploring beyond a limited number of our regular walkable haunts for lunch or dinner. We tend to eat out more when there are boat parts strewn everywhere.) 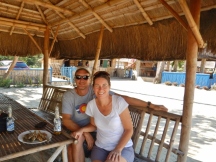 One day, we headed north. With coffees in hand, we drove along the coast up through Zambales province and beyond into Pangasinan province. The traffic got lighter the further we went. About four and a half hours and 210 km in, we reached Bolo Beach and the gateway to Hundred Islands National Park.

Here we thought we’d stop for lunch. That might sound like a simple plan, but there were no restaurants or food stalls or vendors to be found. Just a few small resorts with nipa huts scattered along the sandy bay. Apparently groups arrive bringing all their food with them for a picnic on the beach. We picked one at random and were disappointed to find they didn’t even have any cold drinks to offer us. But the staff were very accommodating. They went and bought us drinks from down the way and fried us up a plateful of freshly caught wee fishies, which were surprisingly tasty, albeit bony. And may have been predestined to be their own lunch. (The two dogs seen in the one photo sat patiently watching us the entire time we ate and happily gulped down all the fish heads.) We also managed to score some peanuts, quails eggs and fried sweets from a beach vendor that wandered by. Not a bad picnic after all.

We decided to take a different route back to Subic (one that was supposed to be quicker). But not knowing which of the myriad of roads in the region would get us to the new expressway, we ended up going miles out of our way to where we knew there was an on ramp. No longer the quiet roads of the northwestern part of Pangasinan. Now we were stuck in heavy Sunday traffic as we crept along through Lingayen (this is where the Japanese first landed in the Philippines during World War II), Dagupan and Urdaneta City. Google Maps was not particularly helpful but we did finally get to the expressway in the end, just before the batteries in our phones died. Note to self: bring a charger next time. From there it was an easy run back to Subic but made for a really long day. So much for relaxing.

Next time we come up this way, it will be on MOKEN and we’ll go explore the Hundred Islands. That will not be a day trip. 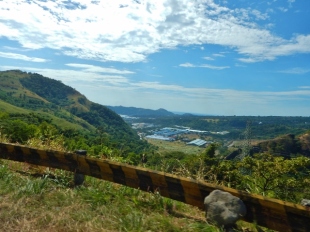 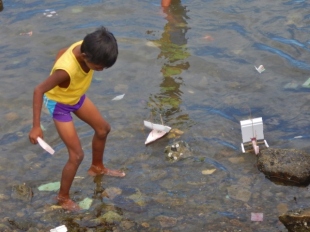 The following Sunday, we headed south to Mariveles at the tip of the Bataan peninsula. This is the launching point for day trips to Corregidor Island (where General Douglas MacArthur and the US commanders holed up during the Battle of Bataan before MacArthur fled to Australia) and the start of the infamous Bataan Death March, see previous post. Corregidor is on our Philippines bucket list, but we’ll save that for another day.

Today was a much more leisurely drive at a mere 87 kilometres through small towns along the east side of the Bataan peninsula. This is the land of oil refineries, new gated communities and extensive rice fields dotted with carabao. A rather odd mix.

After a side trip beyond Mariveles to the end of the road (despite Google Maps showing a road leading up the west side of the peninsula), we returned to Mariveles for a wander through town and lunch. At the fisherman’s wharf, we watched a group of young boys race their homemade boats crafted from bits of styrofoam and paper and talked to a group of fishermen taking the day off.

An attempt at strolling along the waterfront promenade or malecon was aborted as it was in desperate need of repair. There were big piles of debris and giant holes blocking the way. After a fresh seafood lunch at Pupung Grill, we went and had a look around one of the boatyards in the area. It had a pretty impressive dry dock and crane for hauling boats onto a large concrete yard. I’m guessing it doesn’t come cheap but it may give us an alternative for our next haul-out.

Our return trip followed a familiar route through Bataan Natural Park and Morong getting us back into Subic with a full evening ahead to enjoy.