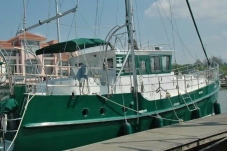 August – October 2015: When we bought MOKEN, there was a small Sunbrella bimini top covering the cockpit area on the aft deck. It could be collapsed in case of rough weather or on the off chance we wanted more sun. In theory we like sun, but in the tropics we’re usually looking for more shade. The canvas was no longer waterproof and we wanted to replace it with a hard top that covers more area. We also wanted to create extra space to mount some solar panels to generate our own power without resorting to running the generator every day when we are off the grid.

Chris had long ago decided on the new type of design he wanted, more or less. It was loosely based on the cockpit cover found on ICE, another Diesel Duck that we had admired online. It was further refined once we learned about a flexible honeycomb core that could be shaped to match the natural curve of MOKEN’s pilothouse roof and fibreglassed to create a strong surface; strong enough to walk on or mount our solar panels. Thanks to Greg from Windchimes for that tip!

At this time last year, we removed the old canopy and frame when we had the deck repainted. Once we were in the water again, we didn’t bother to put it back. Instead, we replaced it temporarily with a big tarp that covered most of the aft deck. It was nice having so much shade.

The tarp came down in June, before my trip to Canada for the summer, just in case there was some nasty weather while we were away. Rather than putting it back up again on my return, we decided it was high time to get our new project underway or we’d be into another cruising season using the tarp like we did earlier this year. 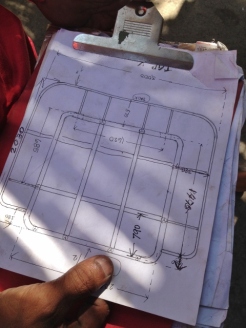 The first step was building a stainless steel frame around the cockpit that would hold a fibreglass roof in place. Just three days after I arrived back on the boat in August, I requested a quote from Ador, our favourite stainless fabricator in town. On the morning they were set to appear, I suggested they bring their rain gear as it was bucketing, to which his son Rein replied, “Waterproof, ma’am.”

When they arrived, I took them to see Moby Duck, another Diesel Duck with a stainless frame similar to what we wanted and then they proceeded to measure the area on MOKEN and make notes and rough drawings on a hunk of cardboard. Less than a week later, we had our quote and gave them the go ahead.

In mid-September, Chris arrived home from work. That same afternoon Ador and his guys were back to take more detailed measurements and go over the final design with Chris. Ricky returned a couple of days later to take a few additional measurements and shortly after that we saw the frame coming together nicely at the shop.

One week after Chris’ return, they brought the frame to MOKEN for the first try fit. Chris had to take off one of the paravane retrieval davits and rearrange some shrouds to make room for them to hoist it onboard from the dock. It took the combined effort of six guys to get it on deck and carefully set it in place. We were surprised at how well it fit on the first go. They quickly set about making a few adjustments and took many more measurements.

Two days later they were back again for the second fitting. By this time, the side stabilization posts had been added. At this point we noticed that the top frame was a little out of alignment on one side, so they took yet more measurements and off they went.

We left Ricky and the guys to continue their work and add a rear shelf and some top rails for mounting the solar panels while we made our escape to Hong Kong and the boatyard in China. Lucky for us, our shipment from Canada had just arrived and we were able to measure our black plastic crates to make sure the shelf was built to fit them nicely.

After we returned from China, we stopped by the shop with a few more bright ideas we had dreamed up somewhere along the way. We added some hooks for hanging shade cloth around the cockpit and a bracket overhead on which we could mount a light.

About a week later they were back again for what we thought would be the final mounting, but a couple of further adjustments had to be made. Off they went again, but came back late the same day. Presto, we had our frame.

In anticipation of shade, we went to a local canvas shop and had them make a custom-sized white tarp with grommets all around to be used as a temporary measure until we could get the hardtop roof made. It was surprisingly inexpensive.

Now it was up to Chris to screw the mounting brackets to the cockpit surround and the pilothouse roof. Every so often I was called out briefly to hold a screwdriver or turn a wrench and then quickly shooed away again to work on my other projects. There are still a couple of small adjustments that will need to be made, but at least it and the tarp were secured to the boat before Chris left for work. And a good thing too, because Typhoon Lando arrived about two days later. The frame didn’t budge and the tarp only fluttered a little in the biggest of the gusts. 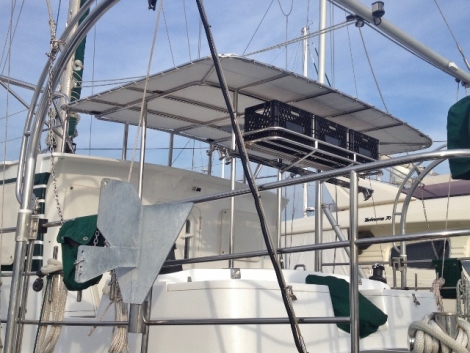 As I type this up, we have a fibreglasser at work on the new hard top. It should be ready for its first try fit on Chris’ return next week. We’ll be sure to keep you posted.

One response to “Bimini Tales”