The sixth instalment of our (not-so) recent adventures in Japan. 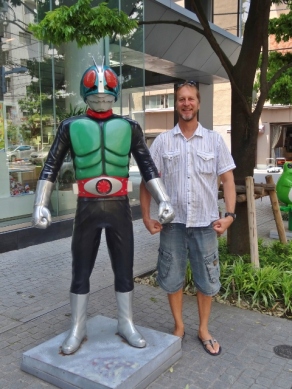 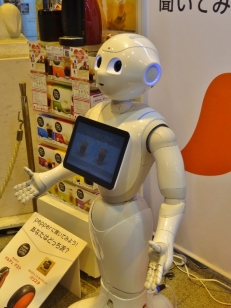 May 3-17, 2015: There are so many different facets to Japanese culture. But one of the most intriguing has to be the fascination with all things cute. I’m not talking run of the mill cute, like the requisite souvenir geisha dolls you can find everywhere. I mean over the top cute.

We spotted numerous teenage girls and young women sporting the “cute” look. This might be as simple as contact lenses to make their irises look bigger. I suspect they are trying to mimic the big eyes popular in anime (Japanese animated cartoons). Young cute anime characters always have large eyes, while adult characters have small eyes. Taken to extreme, you see girls dressed in a blend of Victorian-era fashion featuring copious amounts of pink, fringed with lace, ribbons, frills, ruffles, bows and even bloomers. These are Sweet Lolitas, aiming for the look of a porcelain doll. 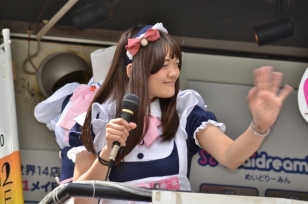 Then there are Tokyo’s numerous maid cafes, many of which operate around Akihabara. I was more than just a little skeptical. Young women in maid costumes standing out on the street corners promoting the different maid cafes, where, inside young women in maid costumes serve their predominantly male customers. It all sounded a little dodgy. But we’d read that they were worth a visit, so we picked one and went inside. It really was very cute and innocent. The maids talk in high pitched voices and giggle a lot. You can order a pancake and a maid will bring it to your table and write a silly message on it just for you. We ordered two ice cream sundaes. One looked like a turtle (made with green tea flavoured ice cream), the other, a cat (vanilla). There was also a bear (chocolate) and a bunny (strawberry). The maids lip synced and danced to canned music, or played silly games with the customers. But don’t try to take any pictures of the maids. That costs extra. After an hour of sugary (saccharin-y?) sweetness, we’d had our fill.

I have to admit, I don’t really get the point of the whole cutesy shtick and I have no idea how the maids could stand being so cute and smiley all the time. Strangely enough, Japan’s culture of cute even has a name. They call it kawaii. As I kind of suspected, cute isn’t all it’s cracked up to be. Check out the article “Japan has a Cute Problem” if you’d like to know more about the other side of cute. 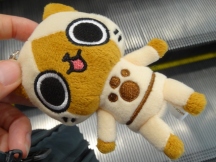 If Lolitas and maids aren’t your thing, maybe you’re feeling the need for a little furry cuteness. Then you can visit a cat cafe and get your fix. (We didn’t. I figured Nukaat would know if we cheated on him, although we could have opted for bunnies, penguins or one of any number of assorted other types of themed animal cafes instead.)

The Japanese fascination with cats doesn’t stop there. Just think Hello Kitty. She may have just turned 40, but she’s still hugely popular…and not just in Japan. Our hotel in Tokyo had Hello Kitty rooms for a scant $500 per night. EVA Air out of Taiwan has a Hello Kitty themed plane. Why, just today I spotted Hello Kitty notebooks and school supplies in Subic. She’s a global marketing phenomenon worth about $7 billion a year, reportedly achieved without advertising.

Doraemon is another cat popular in Japan and other parts of Asia. He’s a blue and white robotic cat from the 22nd Century, sent back in time to help an unfortunate family change its destiny. Doraemon doesn’t have ears but he does sport a magical pouch on his belly, from which he pulls all manner of gadgets from the future. He started in manga comics and graduated to anime, and is now translated into any number of different languages, as a quick search on YouTube makes abundantly clear.

Even one of Japan’s most iconic logos features cats. It shows a black cat carrying a black kitten in her mouth. We spotted it all over the place. It’s the logo for Yamato Transport, Japan’s largest door-to-door shipping company. They claim to deliver your most valued possessions with care.

Other businesses, organizations and government agencies are keen to take advantage of cute. Aside from cute logos and branding, mascots also seem to be popular. Even the Japanese Red Cross has one.

Next up? Bring on the Japanese food. While our primary reason for this trip may have been so Chris could obtain a visa for work, we told everyone we were going for the food.