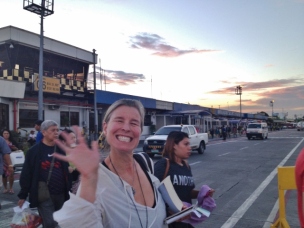 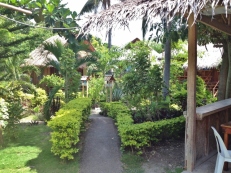 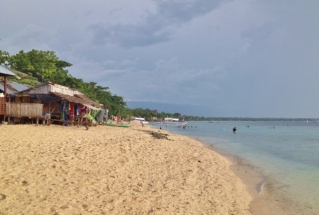 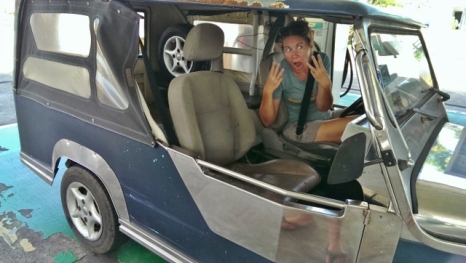 October 24-29, 2014: When my friend Tara, from Canada, said she wanted to come for a visit in the Philippines, little did I know it would take us to a region of the country I hadn’t been yet. What fun!

I met Tara off her flight from Vancouver to Manila (via Taipei) and we took a taxi to the Cebu Pacific terminal, where we had a wait of several hours. It gave us plenty of time for a leisurely lunch at a nearby restaurant. And then some! There were several earlier flights that we could have made easily, but you just never know with international connections. Better safe than sorry. After all that waiting, wouldn’t you know it, our flight was delayed by another hour.

By the time we arrived at the busy Mactan-Cebu International Airport, it nearly eight in the evening and our ride had been waiting for a very long time.

Cebu is pretty much at the geographic heart of the Philippines, located in the Central Visayas. It’s long and narrow, running 196 kilometres north and south but just 32 kilometres across the widest point. We still had a two to three-hour drive south to our bungalow in Moalboal. How Tara slept the whole way as we wove through the mountains from one side of the island to the other, I will never understand. I was hanging on and still sliding around.

When we arrived at our destination, Maya’s Native Garden, we checked in to our spacious eco cottage that turned out to be as good as the online reviews claimed. It was clean, with aircon and a fan, a safe, and a good sized bathroom with hot water showers. What more could two gals ask for? Maybe an ocean view, but seeing as the ocean was just steps away, it didn’t much seem to matter all that much.

But first things first. It was time for a welcome beverage!

Moalboal is a pretty laid back place. Perfect for a short getaway. We spent the next few days diving (more on that shortly), exploring the peninsula and the areas of Panagsama and White beaches, enjoying plenty of fresh seafood and watching the sun set over neighbouring Negros Island, across Tañon Strait. As much as I tried to read a book, I kept dozing off.

With my diving fix satisfied, it was time to hop a bus to the southern tip of Cebu. From there we took a 30-minutes trike ride to Oslob where we would see the whale sharks (more on that to come too). The trikes are quite different on Cebu from the ones we see around Olongapo. We rode in ones that had two rows of seats and others that had one seat forward and one facing out the back.

Another big difference…my very basic Tagolog didn’t help much here. Cebuano is the language spoken in Cebu and most of the Visayas.

Much too soon it was time to head back to the airport to catch our return flight to Manila. Traffic being what it was on the island, we made it with just minutes to spare before the check-in counter closed. The roads around the southern part of the island were in good condition, just heavily congested the closer we got to Cebu City.

From Manila we caught another bus to Subic and spent a couple days hanging out on MOKEN before Tara headed onwards to Bali and beyond.

With additional photos from Tara.