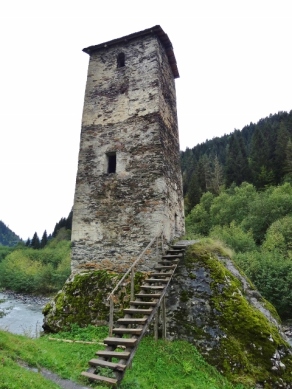 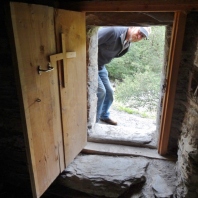 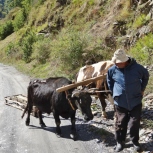 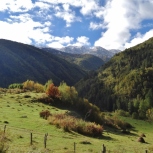 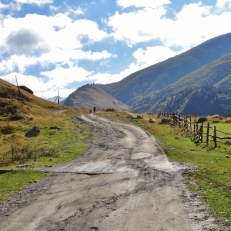 September 25-26, 2014: Our next destination was Svaneti, one of the most ancient and picturesque provinces of Georgia. Straddling the border with Russia, this area is surrounded by towering snow-capped peaks of the high Caucasus Mountains.

We left Kutaisi after a somewhat less than mediocre hotel breakfast that included a lot of individually sized portions of prepackaged processed foods. Blah.

Today we had our choice of two different routes. We could follow the circuitous main highway, or take a more direct shortcut that would shave 30 kilometres from our drive. We learned from our previous days that Google Maps is not particularly good at estimating driving times, but we optimistically chose the shortcut. How bad could it be?

As on other days, our chosen route started out great. Nice paved roads through rolling farmland, interspersed with numerous small rivers and villages. Very little traffic.

About an hour in, I missed our turnoff, but only because I wasn’t expecting to end up on yet another rough track. I’d been on the lookout for a real road. We backtracked to the turnoff but only made it about half a kilometre creeping along on the rocky road before deciding we didn’t want to do this again. Another possible shortcut back to the main highway proved equally disappointing. Two hours after we left Kutaisi, we ended up almost where we started. It was going to be another long day.

The rest of the drive was relatively uneventful but stunning nonetheless. As the road left the central lowlands behind, we started climbing up into the mountainous Svaneti region. Numerous abandoned tunnels lined the road in places. We skirted the shore of the Enguri Resevoir. We saw fresh snow on the mountains up ahead. Brrrrrr! Once again we were reminded that our heater didn’t work.

After climbing higher and higher and winding our way along valleys, through steep gorges and over passes, we finally reached Upper Svaneti and saw our first of the region’s many famous watchtowers. Official Georgian tourism literature says thousands of medieval stone watchtowers still survive, scattered throughout the high alpine valleys. Some with foundations dating back a millennium. Other estimates put the numbers in the hundreds. I didn’t count them so I’m not sure who is more correct. Either way, there are a lot, and you see them dotting the hillsides all over the region.

The towers reach 20-25 metres tall, with four or five storeys inside. Built from local stone, each Svan fortress was also a residential house. Unlike Shatili, these are not tightly grouped together. The ground floor was used for livestock, the first floor for storing hay, and the top floors for protection and defence in times of war. Floors are connected by wooden ladders and staircases. Many Svan families today live in homes attached to the towers, primarily using the towers for storing crops.

The entire Upper Svaneti region has been declared a UNESCO World Heritage Site as “an exceptional example of mountain scenery with medieval-type villages and tower-houses” preserved by its long isolation.

We planned on staying overnight in Mestia, the main centre of Upper Svaneti. When we arrived, we checked out a couple of places to stay before settling on Hotel Mestia right in the centre of town. I imagine this town could be a bit of a zoo in the summertime. It is certainly geared up for large tour groups arriving on big busses.

The very next thing that I did was buy a pair of long wool socks. What a difference that made. Suddenly the air didn’t seem quite so chilling.

Toward dusk, the watchtowers of Mestia were lit from below creating a stunning display against the backdrop of the mountains.

The following day, we wanted an early start for the drive to Ushguli, 70-odd kilometres further up the road. I’d heard horror stories about the road but it wasn’t any worse than some of the others we’d driven on this trip. We even saw a couple of small passenger cars along the way, although I wouldn’t advise that. Best to have a vehicle with high clearance and good tires.

There was a lot of road construction en route. I’m guessing that one day even the big tour busses will be able to get through to Ushguli. That will be a shame.

We stopped for a stretch break at a watchtower located next to a small river and had a quick look inside before continuing on our way to Ushguli, one of the highest settlements in Europe. That’s coming up next.