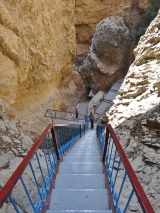 September 13-15, 2014: Towards the end of my visit to Azerbaijan, Chris arranged a weekend trip to Naxҫivan, home of his friend Medjid. Of course, Medjid joined us as our ever enthusiastic guide and interpreter.

The Naxҫivan Autonomous Republic (aka Nakhchivan) is a landlocked enclave of Azerbaijan, separated from the rest of the country by a long narrow spit of land that is home to the Nagorno-Karabakh Republic, an independent but unrecognized state affiliated with neighbouring Armenia. There is a long history of tension between Azerbaijan and Armenia, predating 1920 when both countries were swallowed up by Soviet Union.

In January 1990, Naxҫivan was the first part of the Soviet Union to declare its independence. Somewhere around that time, fighting between Azerbaijan and Armenia resumed. A ceasefire was reached in 1994, although sporadic fighting over Nagorno-Karabakh continues to this day.

Because of the ongoing conflict between Azerbaijan and Armenia, getting to Naxҫivan is more complicated than it used to be. You can drive, detouring widely around Nagorno-Karabakh and Armenia via Georgia and Turkey to the north or via Iran to the south. Or you can fly from Baku, although even the flights bypass the contested area. Since flying only takes an hour or so, rather than a day or two of driving, that’s the option we chose.

Over two and a half days, Medjid took us on a whirlwind tour of his homeland, crisscrossing this small landlocked republic. For the most part, it seemed rather arid and desert-like to me. However, Chris had also visited in May of 2013 and the landscape was much more green and lush at that time of year. What a difference!

With the region’s population well under half a million, the first thing we noticed was the emptiness of the roads. The wild and crazy roads of Baku were replaced by wide boulevards and beautiful, empty mountain highways.

Water features were prominent on the list of highlights, from the Naxҫivan reservoir and a fish farm to several natural springs and a couple of high altitude lakes, including one with moving, floating islands made up of aquatic plants.

Unusual health spas are found all over Azerbaijan and, not to be outdone, Naxҫivan has its share of them. Like the Daridagh (thermal arsenic water) Balneological Hospital in the eastern part of the country. Here, hot, arsenic laced spring water is pumped up from the ground and run through old troughs into bathing pools inside the spa. People with a variety of skin conditions soak in the pools where the water sits around 38 degrees Celcius.

At the other end of the spectrum, the underground Duzdagh Physiotherapy Centre is located inside an old salt mine. Reported to be especially good for people who suffer from asthma, we found the air inside refreshing cool and dry compared to the heat outside. We also took a peek inside the neighbouring Naxҫivan salt mine where the uniquely flavoured local salt is mined for commercial and industrial purposes. Salt is one of the region’s biggest exports and we made sure we picked some up before we left.

Mountains just seem to pop out of the surrounding desert in Naxҫivan. In one, we found the Asabu Kahf Caves, which are mentioned in the Koran. Perhaps the most photographed is Snake Mountain (Yilan Dag). On another nearby rocky escarpment, we discovered an old fortress that is being rebuilt. They still use mules to cart the heavy stones up the steep slope. On the day we visited, nobody was working and the only mule around was munching on hay.

Naxҫivan City also has its share of highlights. There is the old hamam (baths), discovered during excavations for a new hotel and currently serving as a tea house. The Maidens’ Spring is a favourite spot for young couples to go on a date. And then there is the impressive Momine Khatun Mausoleum, commissioned in the 12th Century by Ildegizid Atabeg Jahan Pahlawan in honor of his first wife.

But for me, the biggest highlight was meeting some of Medjid’s family in his home village. We met his mother, oldest brother Chalmsy and his wife, and one of their daughters with her husband and baby daughter. Despite the language barrier, we felt instantly at home.

All too soon it was time to fly back to Baku. Thank you Medjid for showing us around your home!