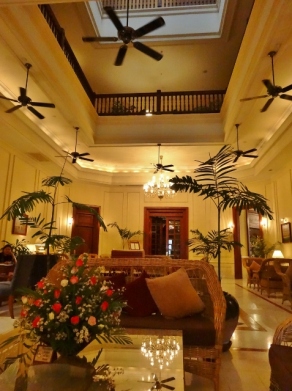 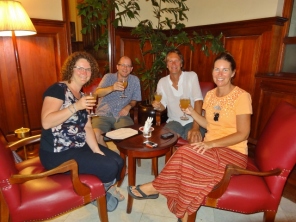 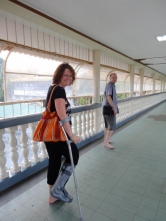 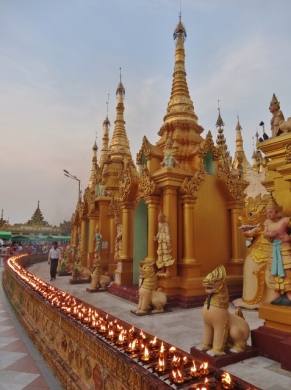 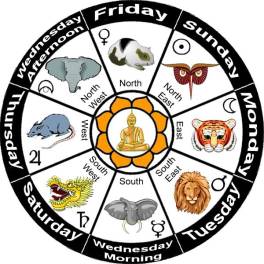 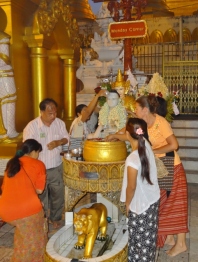 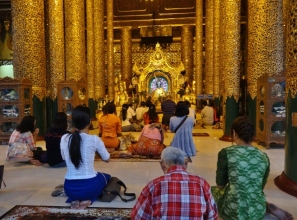 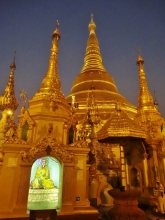 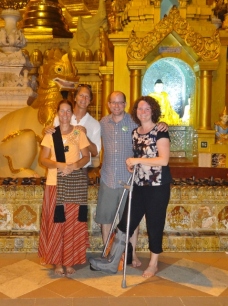 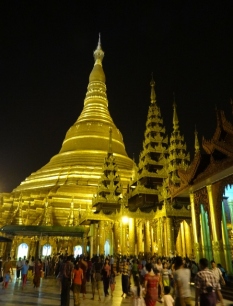 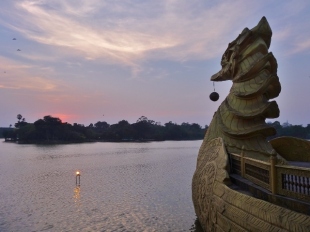 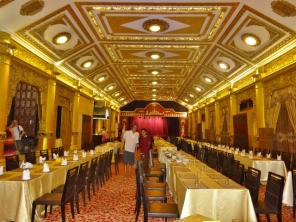 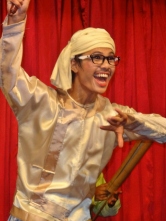 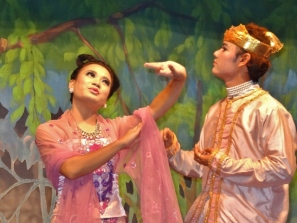 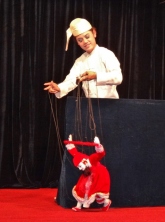 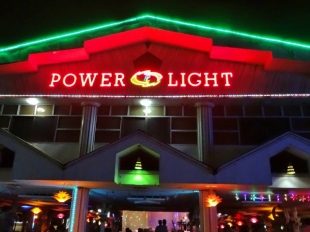 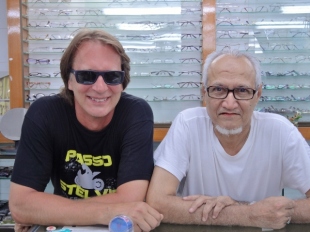 April 17-20, 2014: Aside from our Thingyan Water Festival excursion in Yangon, we spent a few final days in Myanmar’s largest city to cap off our trip. Much of Yangon was still shut down for the new year celebrations, although the water festival itself had wrapped up the day before we arrived back from Inle Lake. Slowly, the city was in the process of returning to normal.

We missed out on a few of Chris’ favourite restaurants (Monsoon and Sabhai Sabhai) because they closed for an extended holiday, but luckily for us Shwe Kaung (otherwise known as Golden Happy Hot Pot) stayed open and did a booming business as a result.

A trip to Yangon wouldn’t be complete without stopping at that old colonial gem, The Strand Hotel, built during the British rule. And then there is always the opulent weekend buffet brunch at Trader’s Hotel, where you can indulge in Japanese, Indian, Thai, Indonesian, European and grilled food, and top it all off with a chocolate fountain. At the other end of the spectrum are the myriad of street BBQ restaurants in Chinatown, serving some foods that are recognizable and others that aren’t.

Everything in this country seems to have two names. A legacy from the colonial period when the British renamed places to suit them. A few years ago, the government started changing the names back. This has caused some confusion in the international community about which name is more appropriate. Should we use Burma or Myanmar? Rangoon or Yangon? Scott Market or Bogyoke Aung San Market?

In the realm of confusing changes, here’s another one. Under British rule, vehicles were right-hand drive and driver’s drove on the left side of the road. In 1970, the country decided to make the switch to driving on the right side of the road. All the roadways and signs were changed, but oddly the vehicles remain predominantly right-hand drive to this day. Most are imported second-hand from Japan, Singapore and Thailand and aren’t required to be converted to left-hand drive. It makes overtaking extra challenging as the driver can’t easily see around the vehicle ahead. And it means stepping into oncoming traffic when getting on or off a bus. Keep your eyes (and ears) open.

Other highlights of our Yangon stay included Shwedagon Pagoda, Kandawgyi Lake and shopping at Scott Market.

Shwedagon Pagoda is without a doubt Yangon’s most famous landmark and Burma’s most important Buddhist pilgrimage site. Perched on a small hill near downtown Yangon, Shwedagon is visible from many areas of the city. This golden pagoda built in the Sixth Century is approximately 100 metres tall, topped with the diamond studded spire and surrounded by 64 smaller stupas. Numerous other buildings and structures have been added to the complex over the ensuing centuries. For more information about Shwedagon and its interesting history, click here.

We arrived late one afternoon and stayed until after dark. As the sun sets and the light changes, the pagoda and other structures begin to glow in the golden light. After dark the atmosphere becomes even more mesmerizing. The pagoda literally gleams in the light of numerous spotlights and smaller shrines located around the site display wild flashing neon lights. The word “shwe” means golden, after all.

At one particular spot on the pagoda platform, we joined a queue of people contorting themselves awkwardly and gazing up to the seven spired hti (an ornament shaped as an umbrella placed at the top of the pagoda). The hti is decorated with golden bells, diamonds and other precious stones. If you crouch real low, twist your head just so and slowly crab walk forward, you’ll see a light that changes colours though the spectrum as it reflect through a large emerald at the top.

“…the stupa alone of the pagoda is covered with 8,688 solid gold blocks. The top of the stupa holds 5,448 diamonds and a combination of 2,317 sapphires, rubies and topaz. There is an emerald placed in the middle. It is there to capture the sun’s rays, and does that best at sunrise and sunset. Below the golden stupa are 7 more gold blocks, which are attached to 1,485 bells. Of those bells, 420 are made of pure silver, and 1,065 are made out of gold.”

At each corner of the octagonal pagoda is a shrine with a Buddha image (one for each day of the week, except Wednesday which has two because Burmese astrology categorizes everything into eight elements). Visitors stop at the shrine belonging to their day of birth, pray, burn candles, offer flowers and pour water over the image. Each day has an animal associated with it. These are our birth days. Can you guess which is which?

Zodiac animal sign: Guinea Pig
Day of Week Born: Friday
Ruling Planet: Venus
Ruling Direction: North
Personality/Attributes of the Guinea Pig:
You are naturally artistic and creative. You have tons of fabulous ideas, but have a hard time seeing them through to completion. This may be because you are going in so many different directions at once. But you hesitate to pick one thing because you bore easily and get tired of the same thing. You are loving, kind and very sympathetic. You are very sensitive to others, and make a wonderful friend.

Zodiac animal sign: Tiger
Day of Week Born: Monday
Ruling Planet: Moon
Ruling Direction: East
Personality/Attributes of the Tiger:
You are very intelligent and intuitive. You have a keen eye for detail. You are strong and patient, but only to a point. You detest being taken advantage of and you don’t like people wasting your time. You are goal oriented and like to succeed. You are respectful of laws, and take responsibility for your actions.

The next night, we decided on two experiences at opposite ends of the Burmese cultural spectrum. First up, Karaweik Palace located on beautiful Kandawgyi Lake. From a distance, Karaweik Palace looks like an enormous two-headed golden chicken boat with views across the lake to Shwedagon Pagoda. Actually, a Karaweik is a bird from Burmese mythology.

The design of Karaweik Palace is based on the Pyi Gyi Mon Royal Barge, in the style of barges used by the old Burmese Kings to travel around the Kingdom. This one doesn’t actually go anywhere though. Inside, there is an enormous buffet and live show featuring a variety of traditional Burmese dance, music and theatre.

After an evening of traditional culture, we moved on to Powerlight for a taste of modern Yangon culture. Powerlight is a beer station where the entertainment consists of female singers. Members of the crowd can buy flowers, garlands and stuffed animals for their favourites. It’s a bizarre spectacle where talent isn’t always necessary to ensure popularity. Not unlike reality TV.

We couldn’t leave Myanmar without a few souvenirs, so a stop at Scott Market (Bogyoke Aung San Market) was also on the itinerary. Although many of the small shops were closed, Chris was happy to discover that his favourite place to buy eyeglasses was open. The owner even recognized him from more than five years ago. He must have been a good customer. This time was no exception. We also found a couple of really nice hand-woven blankets from the Chin State that we plan to use on board MOKEN as chair covers, a few other weavings that we can turn into cushion covers and some nice laquerware serving bowls.

We would be remiss if we didn’t mention the friends that made our Yangon stay so much fun. We originally timed this trip so we could meet up with Andy and Jenny from London. We met them last year on our first trip to Busuanga (see previous blog post here).  Together, we were captivated by Shwedagon, tucked into Chinese BBQ, raised a toast in honor of Jenny’s birthday at The Strand, enjoyed the cultural history at Karaweik Palace and laughed at the spectacle that is Powerlight. All the while, Jenny gamely hobbled along on crutches…a souvenir from a mid-winter ski vacation to Whistler which didn’t actually include any skiing.

We also spent a wonderful afternoon catching up with two of Chris’ former workmates, Charlie and Thanda (and Thanda’s daughter Kate), over the sumptuous feast at Trader’s. The time flew by and all too soon we were saying our farewells. We owe an extra special thanks to Thanda for all her hard work researching hotels for us and making all of our travel arrangements.

And so we come to the end of this Myanmar excursion. Despite two trips to this amazing country, there are still so many areas that we have yet to explore. We’re pretty sure we’ll be back again real soon.