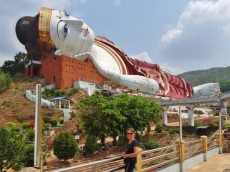 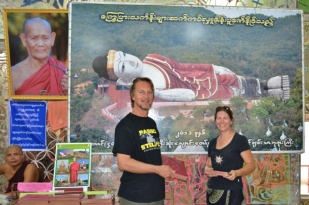 April 11, 2014: About 20 kilometres south of the city of Mawlamyine (capital of the Mon State) and an hour and a half drive from Hpa An, we approached the town of Mudon, where we found the Win Sein Taw Ya monastery that is the home of the current record holder for world’s largest reclining Buddha statue.

The reclining Buddha is one of three popular images, the other two featuring the standing Buddha and the sitting Buddha. The reclining image depicts Buddha during his last illness, as he is about to enter Parinirvana.

The statue is an impressive 180 metres long (590 feet) and 30 metres high (98 feet) and the five storeys inside are filled with dioramas in various stages of completion that highlight the teachings of Buddha and depict hell.

Construction started in 1994 with a donation campaign led by the monk abbot Win Sein Sayardaw Bhaddantha Kesara, who is now well into his nineties. Even though it is still a work in progress, in 2012, construction began on a second reclining Buddha, even larger than the first. Once completed, it will measure 270 metres long (885 feet).

Next up, we’re back to Yangon for the start of the Thingyan Water Festival and Burmese New Year.