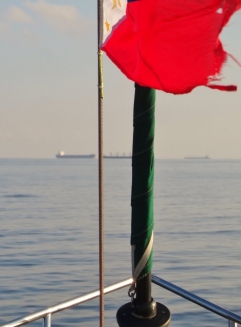 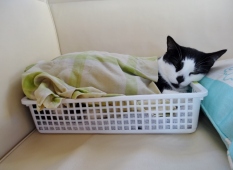 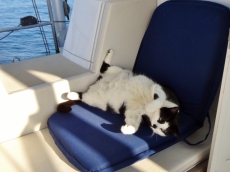 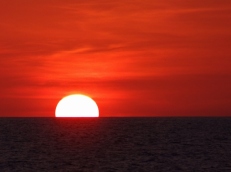 February 5-8, 2014: Our anchorage at Tara Island was about 150 nautical miles south of Subic Bay as the crow flies. In actuality, we covered closer to 190 nautical miles on our return. While these distances don’t sound like much, when you’re averaging just over six knots an hour, it leaves plenty of time to watch the freighters, bancas and fishing buoys go by. And read if the seas are cooperative.

Our first night, we anchored at North Pandan Island, a repeat stopover from last year’s trip where we met up again with dive guide Evzen and picked his brain about diving at Apo Reef. This would have been a perfect day to stop there, as the seas were flat, but we hadn’t left ourselves enough time. There’s always April…

The next morning we kayaked around the house reef before a late start and short cruise to our overnight anchorage at Mamburao Bay. Unlike the blustery night we spent there on our way down, this time it was calm and comfortable. And hot!

The next day, our luck continued to hold with perfect weather and sea conditions, except for a couple of hours when we cut across Cavite Pass between Mindoro and Lubang islands. Here we endured gusts well over 20 knots whipping up whitecaps and big swells on our starboard beam.

If the peaks of the swells are far enough apart, it results in a gentle rolling motion. These ones were close together and made for some violent rocking back and forth that sent a few items not securely battened down hurtling around below decks. It also sent kitty to his basket, his preferred place when the seas get uncomfortable.

We planned to anchor that night in Tagbac Cove on the southwestern side of Lubang Island, with a final long leg to Subic Bay the following day. When we reached Tagbac just after lunch, Chris suggested continuing on to Port Binanga, a small harbour near Subic. It would mean an extra long day, covering 110 nautical miles, and we wouldn’t get there until close to 2300 hours. But the weather was good, the seas were calm and we needed some practice on long hauls and night navigation. So we kept right on going.

Not far north of Lubang, we almost took out the fishing nets of three fishermen in a small banca. There were several buoys in the water but we couldn’t figure out which ones belonged to which boat. With the men in one boat directing us to our right, we decided to cut in between two floats that we hoped belonged to two different boats. Unfortunately, they both belonged to only one of them. Between the two floats was a net held at the surface by teeny tiny little floats, about the size of spools of thread, which we didn’t see until it was almost too late.

With some quick manoeuvring, Chris managed to stop our forward momentum and back us out of the area without entangling the net in our prop. Meanwhile the fishermen in the banca never once motioned to us that their traps were in our path. We think they were hoping we’d pay for some new nets.

That was the biggest excitement this day, until after dusk when we had to cross a busy shipping lane with vessels on their way to and from Manila harbour. We relied heavily on our radar and scanned the horizon looking for navigation lights. Fortunately, although there is a lot of shipping traffic, there aren’t a lot of small fish boats out at night in this area. Many don’t have lights and often don’t show up well on radar either.

We finally reached Port Binanga after winding our way between half a dozen large freighters anchored just outside the bay and dropped anchor at 2315. Kitty had waited all day for dinner and a visit to his litter box. We were asleep almost before our heads hit the pillow.

On Saturday morning, it took a little over an hour to motor our way past Grande Island, into Subic Bay and back to the yacht club, arriving at 0800. Home again. Waiting on the dock were the crews from our neighbouring boats to help with our lines.

As a welcome back, we discovered that we didn’t have shore power. The breaker blew about four weeks previously and the replacement part was out of stock. After much discussion with the marina office, we found a temporary solution and plugged in to the pedestal across the way. Ironically, the new breaker arrived on Monday morning and was installed right away. Out of stock? Hmmmm.

And that’s when the cleaning began!

2 responses to “Return to Subic”