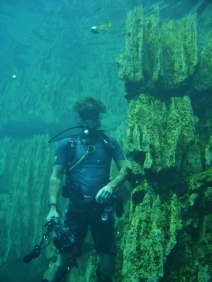 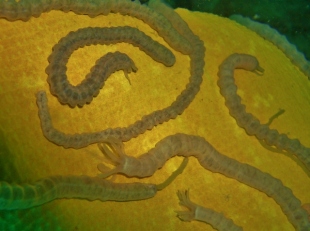 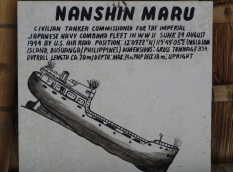 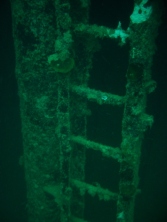 January 22-27, 2014: One of the attractions drawing us back to Northern Palawan again is a big cluster of shipwrecks sunk in and around Coron Bay during World War II. We’d had a taste of these wrecks on the Kyokuzan Maru in Northern Palawan (see previous posts here from April 2013 and January 2014) and we wanted more. This came as a bit of a surprise even to us, as we aren’t normally big fans of wreck diving (at least not on decommissioned vessels, intentionally sunk to form artificial reefs that scatter the west coast of British Columbia). It’s altogether different when there is so much history behind a wreck, you can see the devastation of war first hand and there isn’t any sanitization of the ship to “prepare” it for divers like you find on the artificial reefs.

Most of the wrecks in and around Coron Bay were Japanese supply ships ordered to relocate from Manila Bay after they were dive bombed on September 21, 1944. The following excerpt is from http://www.coronwrecks.com/history.htm

For divers, Coron’s history started on September 24, 1944 when a U.S. Navy strike force of fighters and dive bombers attacked a Japanese supply fleet of up to 24 ships, at anchor, in Coron Bay and around Busuanga Island.

Whether the Japanese fleet was spotted by aerial photo reconnaissance interpreters who noticed that some camouflaged ships had moved, or whether Japanese radio transmissions were intercepted is still debated. Photos taken from the air during the attack do not show any signs of camouflage netting on the ships. The consequence of detection was a surprise aerial attack by U.S. Navy carrier based aircraft that sank the fleet at anchor. The U.S. Third Fleet was under the command of Admiral William F. “Bull” Halsey aboard the battleship USS New Jersey.

Depending on which dive shop you decide to go with, you’ll find confusion over the names of a couple of the wrecks. At various times the hulks of the Olympia Maru and Taiei Maru seem to have mysteriously swapped places with other wrecks. I’ve used the names referred to by H.P. Landolt in his book called “Operations Against Coron Bay” rather than the ones used by some of the dive shops, and much of the details and historic information about the wrecks comes from the same source as well as from the website named above.

Kogyo Maru:
Japanese Navy Auxiliary Supply Ship. Length 129m, beam 18m, 6,353 gross tons. Built in 1927. Survived air attacks in Manila Bay and ordered to transfer to Coron Bay. Arrived September 23, 1944. Sunk by dive bombers with 39 men on September 24, 1944. Lies on her starboard side. Depth 22-36m. On this dive, we were grouped together with several Russian divers with big cameras and one dive guide. The Russians didn’t follow the guide making for a rather confused dive on the dark and somewhat complicated swim through the engine room. Highlights included a bulldozer, rolls of chain link fencing still clearly distinguishable in one hold and bags of cement in another, and lots of fish once we returned to the outside. Guide: Mensoy. Group: Chris & Sandra and 4 Russians.

Barracuda Lake:
Okay, technically this lake (fresh water on the surface, salt below) doesn’t fit in with all the other wreck dives listed here, but it was a pretty cool dive. Or should I say hot? We’d snorkelled in the crystal clear water of this lake last year (see previous post here) and saw groups of divers climbing up and over the steep rock wall that separates it from the bay. After a short climb up and down rough wooden ladders with step heights not made for short legs carrying dive gear, we jumped in. Initially, the water temp was virtually the same as earlier that morning on the Kogyo Maru, at 82F. But as we made our descent along the rock wall, the temperature creeped up until it reached 99F (about 37C). It’s a good thing we didn’t wear our wetsuits this time! Coming back up to 82 degrees was a bit of a cold shock to our systems though. It was fun playing in the thermocline, staying in the warm water below the divide and sticking one hand up into the noticeably colder water just above. There wasn’t a lot of fish life to see on this dive, but it definitely gets top marks for uniqueness. Reportedly there is a big barracuda that lives in the lake, but he was being shy this day. Max depth 35m (the lake is deeper but it gets hotter and less clear). Unguided.

Nanshin Maru:
Civilian Tanker. Length 50m, 834 gross tons. Lies upright on a slope, bow down. Depth 21-32m. We did two dives in one day on this small but beautiful wreck located off Black Island. On the first dive, the Russians were everywhere so we found ourselves constantly trying to get out of their way as they manhandled a poor cuttlefish and barged in when Chris was taking video or I was taking photos. On the second dive we made sure we didn’t enter the water at the same time as the other group of divers, we explored some of the reef around the wreck and had a much more relaxed dive on the wreck. Sadly, the shallow reef area was damaged quite severely by Typhoon Yolanda as the storm moved half the sand from the beach into the water. Guide: Elsie. Group: Bruce, Chris & Sandra.

Olympia Maru (often simply called the Tangat Wreck):
Japanese Army Auxiliary Supply Ship. Length 122m, beam 17m, 5,800 gross tons. Built in 1920. Damaged on air raids in Manila Bay on September 21, 1944 and ordered to relocate to Coron Bay, arriving on September 23, 1944. Attacked on September 24, 1944 and sank with 19 casualties. Lies upright. Depth 18-30m. Near the bow I gave up counting lionfish at 17. There were dozens more. Interesting swim throughs and noticeable bombing damage. Lots to look at inside and lots of life outside on the decks. Great dive. Guide: Elsie. Group: Bruce, Chris & Sandra.

Taiei Maru (name unconfirmed, sometimes mistakenly referred to as the Olympia Maru, the Morozon or the Eckheim):
Auxiliary Supply Ship. There is a lot of confusion over the name of this cargo vessel and the details about its sinking but it suffered a series of direct hits to the bridge superstructure and the hull, and a huge explosion in her engine room led to her sinking. Reportedly built in Europe and captured by the Japanese for use by the Japanese Fleet. Lies on her starboard side. Depth 12-25m. An interesting wreck with good swim throughs, a huge boiler and good life outside. Guide: Elsie. Group: Bruce, Chris & Sandra.

Akitsushima:
Japanese Flying Boat Tender. Length 118m, beam 16m, 4,650 gross tons. Built in 1940/41. Commissioned April 29, 1942. Damaged by U.S. air attacks near Buka Island in Papua New Guinea in 1942 and again in Truk Lagoon in February 1944, but remained afloat due to her very strong construction. After repairs in Japan in August 1944, she arrived in Coron Bay on September 22, 1944. She likely sank due to an explosion caused by a bomb hitting the fuel tanks for the flying boats. Lies on her port side. Depth 22-36m. Another great dive with long swim throughs. We started near the stern where there’s a large crane lying on the sandy bottom and an anti-aircraft gun. Inside, the engine room is a highlight with lots of twists and turns and narrow passages. In fact we lost Elsie and Bruce who were ahead of us when they disappeared at a huge gash in the main deck. I wasn’t sure if they took an inside route or went out. Elsie came back wide eyed in a minute or two and got us back on track. Turns out they’d taken a 180 degree turn coming out of the engine room into another corridor. Sorry no photos of this wreck as my memory card locked up. You’ll just have to wait for the video. Guide: Elsie. Group: Bruce, Chris & Sandra.

Okikawa Maru (sometimes mistakenly called the Taiei Maru):
Civilian oil tanker converted to a Japanese Navy Auxiliary Oil Tanker. Length 160m, beam 20m, 10,043 gross tons. Built in 1926-1930. Another vessel that was ordered to move from Manila Bay to Coron Bay. Arrived September 23, 1944. Attacked by 70 dive bombers on September 24, 1944 but burned for more than two weeks before a final air strike and sinking on October 9, 1944. Eight or nine casualties. Lies upright. Depth 16-26m. On this dive, Elsie took us inside though the propeller shaft, through the engine room and all the oil tanks from the stern to the area near the bow where the explosions had ripped the ship in two. There were a whole bunch of lobsters hanging out together in one of the tanks. Great visibility inside (as long as you had a torch) and a strong current once we got back to the outside. Guide: Elsie. Group: Bruce, Chris & Sandra.

Irako Maru:
Japanese Navy Refrigerated Provision Ship/Reefer. Length 147m, beam 19m, 9,570 gross tons. Built in 1940-1941. Commissioned December 5, 1941. Damaged on August 12, 1944 while underway from Japan to Taiwan carrying a deck load of reconnaissance water planes. Arrived in Coron Bay on September 22, 1944. Sunk by air attack on September 24, 1944 with considerable casualties. Lies upright. Depth 34-45m. What is meant to be the best wreck dive in the Philippines, turned out to be our worst. We dove on air and should have insisted on Nitrox. There were other boats on the wreck with lots of divers all going in at the same time. We should have waited. Instead just as we were about to go inside the wreck to see the engine room, a huge group of divers came out of the same small hole we wanted to enter. And took their sweet time at it to boot. By the time they were all out, our bottom time was up. Even the visibility wasn’t very cooperative. Guide: Elsie. Group: Chris & Sandra.

Lusong Reef:
Although there is a small wreck suitable for divers and snorkellers at Lusong Island, on this dive we wanted to explore the reef for a change of pace. Depth to 18m. Healthy corals and lots of life, including bumphead parrotfish, batfish, shrimps, nudibranchs, a cute baby squid (caught on video) and so much more. Guide: Elsie. Group: Chris & Sandra.

You can also find a lot more information about the wrecks and other dive sites around Coron here: http://www.coronwrecks.com/sites.htm
And this is the dive operator we used: http://www.ddivers.com/

Next up we move on to Sangat Island for our final dives in Coron Bay.