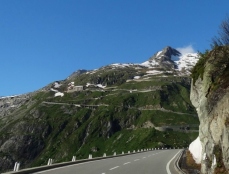 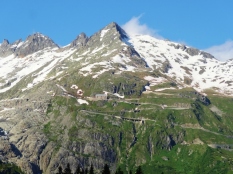 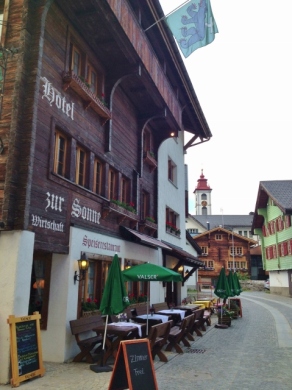 July 5, 2013: It’s Friday afternoon again. That means it must be time for another road trip. Off we go, north to Switzerland and the Alps.

Although we’d always planned to drive the myriad of winding, hairpin passes connecting Italy and Switzerland on two wheels, in the end we opted for four. But no little Clio for us this time. We wanted a sports car, and a convertible to boot. This was not easy to arrange at the last minute, especially considering summer holidays were now in full swing and rental car companies were booked solid. A Mercedes SLX was available (chi-ching!!!), but we decided to get a Citroen DS3 cabriolet instead. Not quite what we wanted in terms of road handling and acceleration, but still fun nonetheless.

Good thing the weather was awesome! The car felt really dark and close with the roof shut, but open it up to the sky and wow, incredible views of the alps. It also makes photography on the go a lot easier than trying to take pictures out the window. There was no time to dawdle for Kodak moments.

Today’s drive took us up the west side of Lago Maggiore once again, although we got lost right away when the GPS unit tried to send us on the dreaded toll highways. We turned onto a teeny, tiny, narrow, winding road until I managed to figure out how to get the GPS to point us back to the lakeside road.

Not far from Baverno, we turned off the lake road, and headed toward Domodossola, the Italian-Swiss border and the start of the Simplon Pass (or Passo del Sempione, if you’re reading an Italian map). In the early 1800s, Napoleon ordered that the Simplon Road be built to move artillery into Italy. Now a popular tourist route, we were lucky we were heading north. There was a log jam of traffic going the other way, including lots of large trucks and caravans.

Spectacular mountain vistas emerged around every twist and turn in the road. Near the summit of the pass, we spotted a smoking burnt out wreck of a car pulled off to the side of the road, with firefighters still busy fighting the blaze.

We descended into the Rhône (or Rotten) River valley at the town of Brig. Originally, we thought we might stay here for the night but as there were still several hours of sunlight (otherwise known as “driving time”) remaining, we continued up the valley towards the Furka Pass, passing through numerous little villages along the way.

It was interesting to see little old wooden buildings perched up on stilts with large flat rocks placed between the pilings and the building. We had no idea what these were at first, but later on found out that they were former granaries. The rocks kept out the rats. Some have been converted into studios and even hotel rooms. Others held large round bales of hay.

Our first views of the Furka Pass were stunning. A squiggly line on a map doesn’t compare to the real thing. The road hugs the mountain side, and switches back and forth as it climbs from the valley bottom to the summit. No tunnels or snow shelters here. But plenty of sections of road built on rock retaining walls cantilevered out from the mountain.

Before the summit we came to the Hotel Belvedere overlooking the glaciers. And then all too soon we reached the summit, were immersed in thick fog and began the descent to the other side. The temperature plunged from 29C in the valley to 12C at the top. It felt particularly cold with the roof open so we turned the heater up full. It would have been chilly on a motorcycle, but we did see a few intrepid riders out and about.

With two passes under our belt, we decided to spend the night in Andermatt in the Ursern Valley, ski resort by winter, centre for hiking and mountain biking by summer. And perfectly situated for tomorrow’s driving adventure with four roads heading in four different directions to four passes. There was just one question to consider. Which one first?