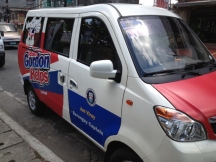 May 7, 2013: It’s election time. Both here in the Philippines and back home in British Columbia. In both places, people will be heading to the polls next week to decide who they want to lead them for the next few years. Timing is about the only thing these two events have in common. The scale of the undertaking in this country is staggering, and the issues are so totally different. Check out the chart below for a quick comparison.

Filipinos seem to have a love affair with showbiz personalities. Boxing legend Manny Pacquiao, model turned journalist and now senator Loren Legarda, basketball players, TV personalities and numerous actors and actresses continue to win seats around the country. Whether they know anything about governance doesn’t really seem to matter to many voters. It’s like a giant popularity contest.

Political dynasties abound for much the same reason, I suppose. In Olongapo, the Gordons run the show and they are aiming to keep the mayor’s position all in the family. If mayoral candidate Anne Gordon wins, she’ll be the fifth Gordon to hold that post. She even has her own K-pop theme song, “Gordon Style”. Former mayor Dick Gordon is running for the senate and his brother Bong, another former mayor, is running for congress.

Politics run deep in the veins of President Aquino too. He is the son of slain Marcos rival, senator Benigno Aquino Jr., and former president Cory Aquino, who was elected after the Marcos regime fell. Even his grandfather was the Speaker of the House of Representatives at one time. Whether he was elected based on the popularity of his parents or his own abilities is still up for debate, but his current term runs for another three years.

Even harder to comprehend is the continued presence of the Marcos family in Philippines politics. Imelda Marcos and her son Bongbong (Ferdinand Jr.) are both wildly popular. She’s a member of the House of Representatives and he’s a senator. (I wonder how her shoe collection is coming along.)  We’ve even had a few people tell us that life was better for the average Filipino under Marcos than it is today. I’m always surprised by this, but they add that at least then they knew where the corruption rested. Today it’s raging out of control at every level.

Pretty shocking really, and I haven’t even touched on the incidents of violence leading up to these elections (as regional clans off their rivals in the provinces), the pre-election gun and liquor ban which is supposed to help put an end to said violence, instances of vote buying and the militants in the Muslim areas of Mindanao in the south. Very few candidates appear to be discussing the issues that could make people’s lives better, and nobody seems to care. What is this, the wild west?

BC politics look utterly tame by comparison and I know a lot of people who have become increasingly apathetic about the issues and the people who run for public office. While Canadians are very fortunate to enjoy a mature democracy, we shouldn’t take it for granted. I’m sure hundreds of millions of people around the world would love to be in our shoes. Don’t forget to vote!