April 10, 2013: We changed our plans once again last night. Originally we were booked to go on an all-day tour to Coron Island. But then we learned that there would be a dugong watching trip today. So that won out hands down.

We boarded a different dive boat early in the morning. The Black Pearl would take us on this adventure. Again we set off to Club Paradise to pick up the rest of the group and all the gear, after watching a short video about the dugongs of Northern Palawan.

Dugongs (related to manatees) are often called sea cows because they eat seagrasses. They are marine mammals that breathe air and have a lifespan similar to humans. Adults average three metres and more than 400 kg. Because they don’t reach reproductive age until they are about 13 years old and have been widely hunted in the past, they are at risk of extinction.

The disclaimer was “no guaranteed sightings” but recent trips had all had some luck, so we were hopeful. But to be on the safe side, I took a picture of the large stuffy in the Dugong Bar at the resort, just in case it was the only one we’d see today. 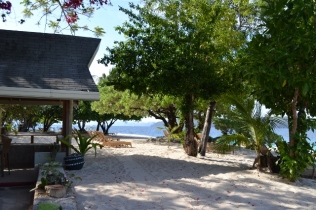 The group consisted once again of Gerald and Stefanie, along with Andy and Jenny from the UK and a couple from Japan.

It was more than an hour to Dimipak Island near the northwest tip of Busuanga Island, where we would do two dives. This gave us plenty of time for napping.

At the island, the boatmen looked in vain for dugongs which are supposed to be easy to spot at the surface over the sandy grassy bottom, their preferred feeding areas. But no luck here. We geared up and jumped in for our first dive. There was a bit of current so we cruised right along. It made it hard to take photos and Chris was using our new Sony in the Ikelite housing for the first time. Unfortunately, the current wasn’t cooperating and the reef here was in pretty poor condition. But we did manage to find a couple of blue spotted rays and a flying gunnard.

Dive number two was on a much healthier reef that the local fishing village is working to protect. With no current to speak of, better visibility and more critters, this dive was much more interesting. Here we found a sea turtle and some jawfish, and Stefanie and Andy saw four eagle rays (sure you did, haha).

Following the dives, it was time to go dugong spotting. On the return trip, the boat skirted the known underwater grassy areas. After seeing nothing but hordes of red jellyfish in the water, one of the spotters pointed offshore. There were two dugongs in the water.

We quickly jumped in with snorkel gear and took off in that direction. But the dugongs moved a lot faster than us and we returned to the boat seeing only more jellyfish.

We sat on the outriggers for another pass around until the spotter shouted for us to jump in again. After lots of swimming in the directions he pointed, we dodged more jellyfish and returned to the boat disappointed.

But luck was with us afterall. On the third try and after a lot of swimming, there they were. It was a mother dugong and her calf. Wow!!! Even better luck, Chris managed to capture them on video.

One response to “Dugong Hunting (Day 5)”