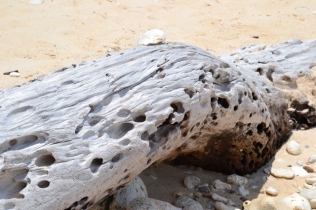 April 9, 2013: Today was a rest day. We got to sleep in until almost seven! The interesting thing about “relaxation” is that everybody has a different interpretation of what it means. For Nukaat, it meant lounging in the shade. For Sandra, it meant lounging by the pool. And for Chris is meant going off exploring in the dinghy. So we did a little bit of each.

After a leisurely morning, we grabbed the snorkel gear and set off to a small islet not too far off the north shore of Busuanga Island. It had a beautiful white sand beach and a promising coral garden. The ride out was pretty smooth but when we got closer, there were waves breaking on the beach coming from around both sides of the island.

It looked a little dicey, so we anchored the tender a little ways offshore, jumped in with snorkel gear and swam to shore. There were lots of small and medium sized jellyfish in the water, so snorkeling was not the best idea but the coral garden was lovely with a nice little dropoff not too far from shore. And with our snacks and cold beverages back on the tender, we decided to try and beach MOKEN’s little sidekick.

It was a bit tricky timing the ride in with the surge from the waves, lift the engine at just the right moment, both jump out on opposite sides of the boat and pull the boat on to the beach, but we managed it without too much difficulty. The trickier part was turning the boat around so the waves wouldn’t swamp the engine.

With that done, we explored the beach and checked out the jellyfish washed upon shore. It was a teeny tiny beach, so that didn’t take us long. And then we decided we should go for a tour up the Pangauaran River to a small fishing village to see if we could arrange a ride into Coron Town for another day.

Wouldn’t you know it, just as we were ready to haul the tender back into the water, the waves picked up and were coming at us head on and alternating from each side. We felt like a surf rescue team as we waited for our moment and charged forward into the water and jumped in. Then Chris quickly had to lower the engine, start it and get us moving before the next wave crashed onto shore.

Up the river at the fishing village, we had a hard time finding anyone who spoke English. When we finally did, we learned that the only jeepney into Coron leaves at 3:30 in the morning and returns around lunchtime. Not the best option if we wanted to go for a day tour to the lakes on neighbouring Coron Island. We’d have to rethink that.

Back at El Rio Y Mar resort, Sandra finally got her chance to relax by the infinity pool in the afternoon. It felt so good to shower off all that salt before jumping in to the freshwater pool.

We met Stefanie, one of the dive instructors with Dugong Dive Centre, which is based at neighbouring Club Paradise Resort, but has a satellite shop at El Rio. After talking to her about the local diving, we signed up for two dives the next day on the only Japanese WW2 wreck on the north side of Busuanga, less than an hour by boat from the resort.

That evening, the resort put on a Hawaiian theme night at dinner with the staff performing as hula dancers, fire dancers and in sailor costumes dancing to the Village People’s “In the Navy” and “YMCA”. It was actually pretty fun until the karaoke started. Time for us to leave!