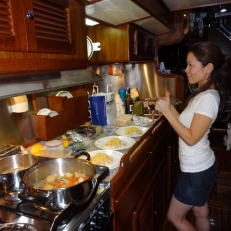 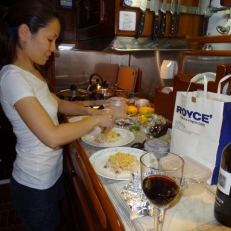 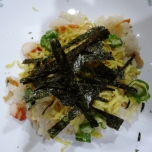 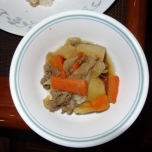 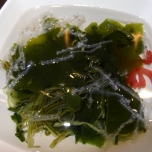 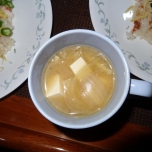 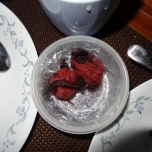 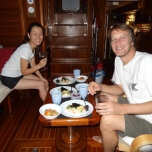 December 21, 2012: Since we had Sachi over for dinner a few nights back, she wanted to return the favour and make us a traditional Japanese dinner. How could we refuse that offer?

She whipped everything up in her kitchen during the day and brought it over to the boat. We later learned that her kitchen is full of food she brings in her luggage on every trip back from Japan. She says clothes are easy to find here, but Japanese food isn’t.

Once on MOKEN, Sachi took over the galley and soon had us dining on a menu that included homemade miso soup, chirashi sushi, niku jaga and umeboshi.

I can’t believe I’ve never had chirashi sushi before. It was delicious. The vinegared sushi rice was cooked with prawns and then sprinkled with tamago (egg) and seaweed.

Niku jaga literally translates as meat and potatoes but it also includes carrots and onions and is cooked with soy sauce and sake, among other things. She used thinly sliced Shabu Shabu beef available at Royal, one of the bigger grocery stores in Subic.

She also brought along some umeboshi, which are pickles made with Japanese ume fruit (often called plums, but more closely related to apricots) that are pickled and stored for a year before eating. They were made by her mom and were sweet, sour and salty all at the same time.

And let’s not downplay her Miso soup. Generally, I’ve always thought this stuff was highly over-rated. A few tiny pieces of tofu and seaweed floating in an overly salty broth. Not so! First she soaked multi-coloured seaweed in water. She put that into cups and then poured over her homemade broth, complete with huge chunks of tofu and flavoured with onions and radish.

Dinner was a huge hit. We were stuffed and the world didn’t end after all. So that means we can have the leftovers for lunch tomorrow!