The timing is never right for a big life change. Early last year, we had a five year plan. Keep working, pay down our mortgage, get the house ready to sell, learn all we could about offshore cruising without having an offshore boat and maybe, if we were really good, we could afford the boat of our dreams in about five years time. Or maybe seven.

You see, we had our hearts set on a Nordhavn 47 ever since the first time we saw one in Victoria’s inner harbour several years back. Before that day, we didn’t really know you could do extensive offshore cruising on anything other than a sailboat. And we aren’t sailors. We went home and googled Nordhavn and our eyes were opened to the possibilities of long-range passagemaking. It was love at first sight and our dreams kicked into overdrive.

We researched and read. We walked the docks in Sidney and at marinas where ever we happened to be.

I had two requirements…a walk around deck for safety and docking access and a second head so we could invite guests along. Chris had a list as long as his arm. The 47 met most of our requirements. But as perfect as we thought the Nordhavn 47 was, it was priced out of our league. So we looked at the other models in the line, the 40, the 43, the 46 and the 62. If you’re going to dream, you may as well dream big! 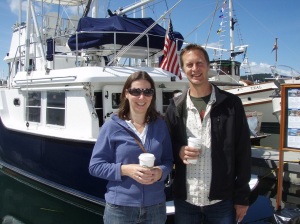 At Trawlerfest in Anacortes with a Nordhavn 40, May 2010

We toured these boats at Trawlerfest in Anacortes and the Seattle Boat Show and walked up and down the docks in Sidney every week or two. We read every issue of Passagemaker magazine and boating forums and blogs. I even created a spreadsheet in Excel to compare all the pros and cons of each of the Nordhavns. The 40 was just too small, didn’t have a protected walk around side and only had one head. The 43 was overpriced. The engine room in the 46 was too tight and most of the boats were a little too old. The 62 is perfect but is way too big for two people. We kept coming back to the 47. It had the space, the features and the layout we liked.

We miss you Itchy! May you forever chase bunnies now.

So we resigned ourselves to the five-year plan and adopted Nukaat in April 2011, after our beloved Itchy went to kitty heaven at the end of 2010.

Then on Canada Day last year, my mom took sick and was hospitalized. The prognosis was not good and she failed rather quickly, passing away on August 15th. And that’s when things started getting really weird.

Chris began looking a little further afield and stumbled across an offshore boat named ICE, which eventually led him to the Diesel Ducks. A northwest coast trawler design, some with a sailing rig, some without. Nothing at all like the Nordhavn 47. More rugged, steel hulled, sails and nearly twice the range. 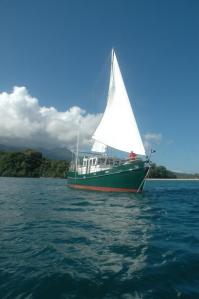 He googled “Diesel Duck for sale” and up popped BELLE, a Canadian-registered Diesel Duck 462 located in the Philippines with 250 hours on her John Deere engine. An email was sent on August 19th. Turns out the owner was Canadian but lives in Thailand, and just happened to be in Canada at the time. In Port Coquitlam, no less, not more than 15 minutes from my parents’ place. The funeral was August 20th. We met Robert for coffee on August 21st and talked about BELLE.  By the end of the month we had a signed offer to purchase subject to sea trials, a survey and a haul out by Remembrance Day.

The course was set. Suddenly, it was all happening very fast.